NAC correspondents Ariella Cohen and Brentin Mock send a report from New Orleans, where residents and officials are still trying to get the help they were promised by the federal government — with limited results.

By Ariella Cohen and Brentin Mock
All photos by Karen Gadbois

There are many differences between George Bush and Barack Obama, but they do share one thing in common: While the Gulf Coast reeled in need of recovery, both presidents were on vacation. In 2005, when Hurricane Katrina struck and wiped out much of southeastern Louisiana, and the coasts of Mississippi and Alabama, Bush was at his Crawford, Texas getaway. Four years later, much of the housing and infrastructure lost in storm floods still has not been rebuilt — and yet today, on the disaster’s anniversary, Obama will not be marking the day with a groundbreaking or ribbon-cutting. He will be wrapping up a vacation on Martha’s Vineyard.

The president’s decision to stay on the east coast this week did not come as a surprise to the people of the Gulf Coast, where kudzu-covered playgrounds, closed schools and decaying roads inspire little trust in public officials. Yet even if predicted, the president’s absence still has managed to leave a bad taste in the mouths of many here who expected more from the country’s first black president, a former community organizer who campaigned on a promise that he would make it “clear to members of my administration that their responsibilities don’t end in places like the Ninth ward – they begin there.” 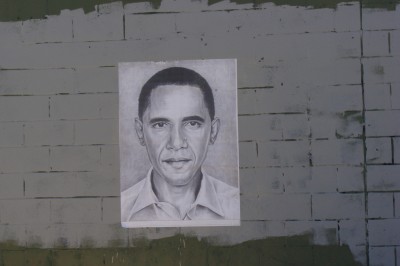 “He’s better than Bush, but that does not mean much when you know people from Washington are coming here to see this devastation and still, he is not here and the money is not flowing,” said Vanessa Garringer, a former Louisiana State University administrative assistant who was laid off after Katrina and now leads the Lower Ninth Ward chapter of ACORN in New Orleans. According to a survey released yesterday by the Institute for Southern Studies, Garringer is far from alone in her assessment. More than 50 Gulf Coast community leaders were asked in the survey to grade the president and Congress in eight key areas. Obama’s grade? A D+, putting him only a hair above Bush, who scored the lowest possible score of D-. Responses revealed “ongoing frustration with the scope and pace of federal initiatives,” said report author Chris Kromm.

While the meager pace of progress in the region obviously predated the president and cannot be solved solely by actions taken by his administration, the Institute for Southern Studies report serves as a strong reminder that grand gestures just won’t cut it anymore: strong actions are needed. 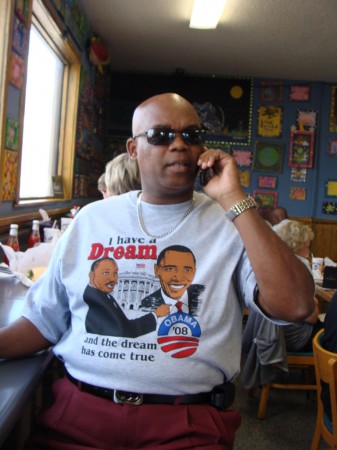 Last month, the corps admitted that at least 13 projects in the region’s planned $15 billion regional hurricane protection system may not be complete in time to meet a 2011 deadline instated in the wake of the 2005 levee failure. The Bureau of Government Research reports that while median income wages indicate that New Orleans workers earned $273 more per month in 2008 than in 2004, rent and utilities increased $326 per month over the same time period. According to an annual post-Katrina recovery report put out last month by Greater New Orleans Community Data Center and The Brookings Institution, area homes sales were down 49 percent and new construction down 38 percent last year. Sharing the streets with the for-sale signs are close to 66,000 blighted housing units in Orleans Parish. While American Recovery and Reinvestment Act stimulus funds helped abate the housing crisis in other parts of the country by allowing developers to cash in low-income housing tax credits to spur financing, the Gulf Coast was not given a cash-in pass for the GO Zone tax credits allocated to developers in the region after Katrina and Rita. Another disappointment is an ongoing dispute over the future of the Charity Hospital system that served the city’s poor and uninsured for generations, but never reopened after Katrina. Administrators from Louisiana State University, which operated Charity Hospital as a teaching facility, have been haggling with FEMA over reimbursement for the storm-damaged hospital for the past four years. Before being elected, Obama vowed to resolve the matter with support for a “major medical complex in downtown New Orleans,” yet funding for the project remains in contention. The lagging pace of progress on the public hospital reflects poorly on a president who rode to office on a promise to improve health care for all Americans.

Secretary of Housing and Urban Development Shaun Donovan brought a little hope yesterday when he announced that HUD is relaxing a “duplication of benefits” rule and allowing $100 million in community development block grant funds to be used by families who’ve already received federal recovery funds but need additional federal dollars to bridge funding gaps. The policy adjustment will allow homeowners to move closer to completing their recovery through the block grants, which will be administered by non-profits much to the approval of foundation heads and community organizations. FEMA chief Craig Fugate, former director of the Florida Division of Emergency Management — and who had family living in the New Orleans area when Katrina hit — is another appointee that Gulf Coast residents are looking to for needed change. Already, Fugate has cut out some of the red tape surrounding federal disaster response in hopes of preventing another Katrina-like debacle wherein people are waiting for days for relief supplies to arrive. 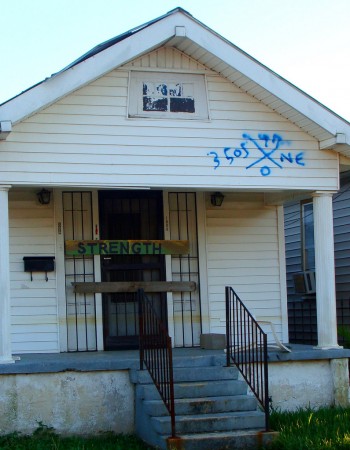 Policy analysts working in the region say that the reforms instituted by Donovan and Fugate reflect a surgical approach to recovery policy that could lead to the kind of big action people here are impatient to see. “Neighborhoods are still languishing,” said Kalima Rose, director of the PolicyLink Louisiana Equitable Recovery Initiative. “We’ve said for a long time that changes must be made… Finally that is starting to happen.”

Another positive sign for the region is the establishment of a new inter-agency working group to oversee restoration of the Louisiana and Mississippi coast. The panel has been charged with exploring options for managing work that has been directed by the Army Corps of Engineers for decades. Obama said this week that the new working group will be overseen by White House environmental and budget offices. The decision signals recognition of long-standing criticism that Corps miscalculations are to blame for the flooding that devastated New Orleans after Hurricane Katrina and that the agency has taken too long to rebuild a stronger hurricane protection system. 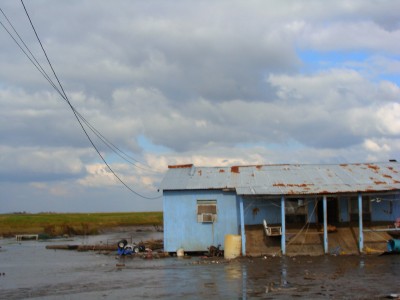 Louisiana Senator Mary Landrieu recommended Obama create the task force in a July 31 letter delivered to the White House. “I am pleased that the President has responded to my request to elevate the challenges that face coastal Louisiana to a higher level of priority within the federal government,” the Louisiana Democrat said in an e-mailed statement yesterday. “I hope that this administration continues to take steps to identify any and all federal resources that can help restore and protect our fragile coast.”

Yet local officials say that without immediate boosts, long-term policy shifts could amount to little. One key short-term fix, says Milton Bailey, head of the Louisiana Housing Finance Agency, would be authorizing Treasury Secretary Tim Geithner to include GO Zone tax credits in the ARRA exchange program. Baily disagrees with Geithner’s assertion that it’s the duty of Congress to make the call on the stimulus tax credit exchange.

“[Obama’s] people believe it’s a job for Congress,” said Bailey. “We all know how long it takes to pass an act of Congress. Meanwhile, people continue to live in the street, sit in toxic trailers or sweat in overcrowded accommodations while waiting for the promise to be fulfilled.”

Training for the Post-Pandemic Workforce

How to Fix Work

How Cities Can Help Small Businesses Hire and Train Locally