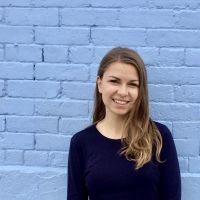 As calls to defund the police grow louder, this conversation isn’t new to Taji Chesimet and Britt Masback — but the volume is. The two Portland students founded Youth Educating Police (YEP) in 2017 after police shot and killed Quanice Hayes, a black 17-year-old in their community. Through restorative justice training, research, and policy, they’ve been working to transform Portland’s police system — and now they’re expanding to partner with communities in other cities.

With change taking root in cities across the U.S., we spoke with Taji and Britt, who just graduated high school, about their work, police divestment, community reinvestment, and the power of youth activism.

This conversation has been edited for length and clarity.

Set the scene for your work in Portland.

Taji: Portland is made up of about six percent black people, but they’re disproportionately affected by use of force and stops by police. People sometimes pass over Portland, as if we’re this super liberal city with no issues. Many police officers claim we don’t match the national stats — that we’re different. But whether I’m in Portland or D.C. or Chicago, wherever I see a police officer I’m going to have that same feeling that goes to my gut. They’re representative of what’s happening in this country and have a responsibility to be educated and try to change these things.

Our country was founded on stolen land and built up by slaves. These same slaves were then chased after and patrolled by slave catchers that created the first official police force in Boston in the early 1800s. That’s the origins of our police, and in the 21st century this culture of violence is not gone, it’s just morphed and changed names.

I’ve been involved with the criminal justice system since I was like 10. Starting YEP with Britt in 2017, there was a spark when I was like “Oh, there’s something we can do about this. It’s not something I just have to live with.” I had this weird future thought that we could do something revolutionary — and I still have that feeling today.

Where did you start?

Britt: We began with a community-building process — listening sessions, focus groups, and working with other organizations who made space for us. We heard from youth what’s causing concern or trauma and turned that into a draft of what a training for police could look like. Being a youth organization, it was hard going into the room with police and their hundreds-of-years-old systems but it helped to start from the community.

Taji: At the roots, our training is focused on cultural competency and restorative justice, however there is inherently the need to address the disproportionate use of force that affects youth of color, and black and indigenous youth specifically. So we present our work with the concepts of psychologists coupled with the experiences and truths of young people.

How has your work shifted?

Taji: We’ve had to critically examine “is training enough?” Are we doing enough incremental reform to fix this system of policing? What we recognized, quite frankly, is this system isn’t working. Now we’re focusing on the two sides of it. YEP’s policy side focuses on divestment protocols which work to limit negative interactions altogether. And then our training acknowledges that some interaction is inevitable.

Britt: We’re moving to work more on policies related to divestment. Trying to reduce over policing of low level offenses or patrolling and enforcement in certain communities. Taking out school officers is one way of divesting like has just occurred here in Portland and many other cities. We want to assess what the community wants, where they want police to step back, and then mandate police policies to do that, whether it’s reducing personnel or defunding other programs.

How are protests in Portland and across the country impacting you?

Taji: What’s happening in the streets quite literally pushes us to do the best and the most we can right now. I’ve been participating in the protests and reaching out to people on the front lines to understand their demands and how we can incorporate them into our policy work.

Last week, Portland disbanded the entire youth services police division and all school resource officers are out. That was something we were working on six months ago. Right now we’re looking at budgets with the city. It allows us to help work to shift priorities — the budget is a moral document. We’re shifting it to look at community-based intervention rather than the need for officers.

We were already working on a recommendation for the city mandating restorative justice training for all police officers. That policy has been moving faster and faster as everything’s been happening, and we’re having a forum about it.

What kinds of other policy changes do we need to see?

Britt: Divesting and reinvesting that money in community programs is really important. But we also rarely see officers held criminally accountable. One issue people are working on is qualified immunity, which gives officers another step up in the criminal justice system and shields them from prosecution. That’s something that needs to go and we’re working on it.

Taji: Right now police can handle everything from behavioral issues, to school shootings, to terrorism, to mental health conditions. You require a professional licensed hairstylist 2,000 hours of training to do one person’s hair, but you only require an officer a hundred hours in some police departments to handle an instance with an individual experiencing trauma and mental/behavioral health crisis. It leads to someone dying.

What trends are you seeing among your peers right now?

Taji: Young people are fed up. Since the 1990s, we’ve seen an insane increase in funding and protections for police officials that’s been pushed directly by the remnants of the “War on Drugs,” directly affecting communities … and now their children are saying no more. Young people are saying “We have the solutions in our community. We can do this without the need for officers.” I think that’s been shown in Minneapolis and Portland. When you invest in your communities rather than state-sanctioned violence, you’re creating a safer and more just society focused on public safety.

Britt: Also, now more than ever, youth have used the power of social media to mobilize and fight back, sharing stories. Since George Floyd’s killing, they’re showing other injustices that are happening and making sure they’re included in the movement. Every time I open social media I see people sharing resources and supporting each other. That’s the power of our generation.

What does it look like to care for yourselves and your community during this time?

Taji: It’s a never-ending process. These last two weeks, I’ve had to test my ability to take care of myself and not work like 17 hours from the point I wake up. It’s very tiresome, specifically having to re-explain concept after concept  —  like why the bad apple concept doesn’t work, or why racism permeates across all areas of policing as it exists now.

Even the process of trying to upend this one system of racism will create in itself a level of trauma that we have to reconcile with, specifically in black communities. Having to deal with this  —  protesting until 1:00 a.m., getting tear gassed, running, coming back and dealing with the chaos  —  it’s not going to be easy to move past that, even if we move past the issue we’re trying to fight, which I hope I can see in my lifetime.

What does it mean to press on for change?

Taji: People are spending hours in the streets, dealing with pain and sweat and blood of fighting state-sanctioned violence, against state-sanctioned violence. That is fueling us to work harder and harder. Some could argue standing in the protests is harder than what we’re doing. I’m very hopeful to see so many young people are continuing to show up. The Mississippi bus boycotts were months long; the Birmingham movement was 47 days long  —  these things aren’t two days long. I’m really hoping this will lead to change.

Sarah Holcomb is a writer based in the Washington D.C. area. Originally from Austin, Texas, she previously reported stories for city publications such as Austin Woman and Austin Fit. She currently works in the international nonprofit sector and her writing features social entrepreneurs, grassroots organizations and movements for change around the world.