A rendering of Bucknum’s planned Urban Biofilter Project, which would clean up superfund site with urban forests. Courtesy of Hyphae Design Lab 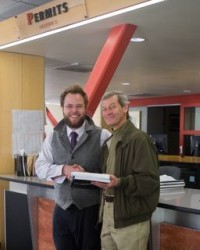 Walk into the West Oakland headquarters of Brent Bucknum’s ecological engineering firm, and you feel as if you were still outside. Large windows let in sheets of sunlight, tables are built from whole trees, and a functioning indoor wetland takes up a sizeable portion of the main room, filling the indoor space with the sound of falling water.

It’s an appropriate setting. A native of Philadelphia, Bucknum (at left in the photo) designs with the dual goals of ecological revitalization and community building in mind. Hence his firm’s name: Hyphae Design Lab. Hyphae not only references the Bay Area’s ‘hyphy’ hip-hop movement, but the little- known mycelium fungus as well. Though often overlooked, hyphae are responsible for transmitting nutrients throughout natural food webs, a crucial ecosystem function. Bucknum hopes his work with Hyphae Design Lab will play a similar role in the built world, acting as a point of connection between engineers, landscape architects and policy makers, in order to address issues that conventional design systems largely gloss over.

With roles in high-profile projects like the California Academy of Science’s living roof, Hyphae’s reputation for innovative ecological design is growing. More ambitious projects are in the works, including a plan to improve soil and air quality in West Oakland superfund sites through urban forestation projects. Bucknum recently took time out to talk design, his vision for the future, and Hyphae’s upcoming projects. Below are excerpts of the conversation.

Johanna Hoffman: In your work so far you’ve made it a point to operate at the confluence of ecology, art, industry.

Brent Bucknum: That’s what I’m aiming for. As architects we operate in the middle. This fall I did an artist residency at Montalvo Art Center but I treated the process almost like an engineer or ecologist residency. Working with two artist friends from LA, I won a public art competition to build a climate clock, to basically create a tool to help people interpret climate change over a hundred years. That’s how long it has to last. Our clock is focused on biological systems and how to read them.

So, for me, this work is really about re-creating our knowledge about the environments around us. It’s about using the amazing tools we have to understand the complexity of nature; learning through art and design and technology the amazing whims and chaos of nature, and its rhythms too. That’s the biggest chore and the most interesting realm to take on, dealing with and adapting to change.

JH: How did you first get into ecological design?

BB: I did sculpture-based work in high school, first for a metal artist and then for a stone carver, in Boston and Vermont. The stone carver was very much about taking pieces from nature and augmenting them only slightly. And then I went to a farming high school for the second half of my high school. Our science program was about reading the history of the land, learning its evolution from sheep farming to forestland, and back to agriculture. And that got me really excited.

I was kind of going in the direction of restoration, and then teetered over towards environmental law, focusing on land planning. But then I realized that restoration stuff, these days, is mostly about giving a license to kill.

JH: Can you explain that further?

BB: Well it refers to what goes on in a lot of the environmental process today. There are ecologist and planners who are valuing habitat and then putting a replacement value on it – maybe it’s 1:2, or 1:10 in a more extreme place. In that kind of system you’re able to destroy habitat somewhere or to bank it just to save it somewhere else.

That could make sense if you were really understanding all the ecological functions in the habitat you’re destroying, but more often than not these people are destroying habitat that has a lot of diversity and richness to it, and creating instead habitat that barely meets it performance goals. I was unfortunately involved in that work through different companies, getting hired to do mitigation. It’s a tough scene.

JH: I just had a revelation. You know how historic preservationists are more often than not the people who have to decide which built environments are worth preserving, based on economic considerations, etc? In a lot of ways, ecologists have to do the same thing with natural ecosystems. They have to decide whether this ecosystem is more important than that one because of x considerations.

BB: Yeah, and it’s so sad because either you’re working for the government, or working for a non-profit, but you’re basically just consulting for a developer. So that took me in a direction of urban restoration, where at least I could focus my attention on working in brownfield sites, places that are already destroyed habitat, and restoring the ecological functions there. So for us, it’s all about valuing the ecological function of the site, the different symbiotic relationships there, and how we can create restorative features to improve soil quality and air quality, etc. on site.

JH: So what current projects are you working on?

BB: Our newest project is called Waterman Gardens. It’s a redevelopment of old army housing, on about 40 acres in downtown San Bernadino. They’re basically doubling the density of the space. I’m for rebuilding the housing but using the same master plan that the army used. They did a lot of things really well, in terms of orientation and layout of the streets. Some of the storm water issues leave something to be desired but, for me, I’d always rather work with existing conditions to some extent than spend a lot of money and resources to tear it up and relay the grid, if you will.

So we’re trying to urge for some alignment with what’s there and using the resources at hand. The biggest aspect of the project for us is looking at whole site wide grey-water use, to basically reuse 60-80,000 gallons a day. In either a centralized or decentralized scale, we haven’t decided. I think somewhat decentralized, in different clusters, is better, cheaper and could be more beautiful.

JH: As a designer you always have clients you have to please, be it a city or an individual. Who are the ones you feel are your biggest allies in what you’re trying to do?

BB: It varies from city to city, and within city departments it’s different as well. But I would say, industrial developers are almost always the most against ecological construction, because they fear it’ll bring up other lawsuits for them. But I’ve been trying to argue that they stand to benefit the most from greener systems.

Basically they have more extreme costs because of their emissions, both water and air. The emissions costs add controls that are really expensive for them. So, for example with waste-water treatment, almost all municipalities charge companies based on the quality of their waste in addition to the quantity. But if you can increase the quality of the water before it gets to the end of the system and diminish the quantity a little bit, you can save these companies a lot of money. That’s where performative living systems that are pretty cheap can make a lot more sense than really expensive controls. That’s been a lot of our focus lately, working on those types of projects, pushing more industrial waste streams.

For us, it makes more sense to work on a large scale, and focus out attention on where the care and detail that we’ll give to the project will be most effective. So we’re pitching new ways of managing waste streams. And that’s why I’m so excited about doing these neighborhood scale projects, because they let you figure out a way to jump start those larger recycling systems.

JH: What role does design have in ecological restoration and preservation that policy, etc. can’t address?

BB: Well, they in a sense have to go hand in hand. And they play off each other constantly, because the designer is always the developer’s tool to creatively address the different interests at hand, like the client, policies, and legal requirements.

That’s where we’re focused, on convincing people that it can be a lot cheaper to do things the most ecological way possible and to show the value of that as ecological designers. And that’s the way we play at the developer level, as their interests are primarily in making things cheaper.

But I think it’s just as important to be involved in the policy side. Right now I’m on the planning commission for West Oakland. You need to be involved at the planning level if you want to impact the actual eventual development, because you have to be in there working with the community, talking about what the important criteria are. Here in West Oakland there are people with so many different voices. Most people on the commission aren’t designers – they’re just community members with really good ideas. So I want to start dialogues about what standards should be for green development. And it becomes a feedback loop, in that those standards can then become the design constraints that the developer has to follow, that then allow the designer to be creative. So you have to work on both.

JH: What about Hyphae? Where would you like to take your work in the future?

BB: I’m pushing for tons of collaboration. I definitely want to focus on industrial scale designs and solutions to neighborhoods and cities. But it would also be interesting for our own sanity to develop some more interesting designs of product and new ways of routing our buildings and cities.

I want to get to the level of how our toilets and sinks are designed, and our kitchens, and the way we think of plumbing infrastructure. I think the whole system could become more like internet connections, in the way that there are data hubs where you plug in different Ethernet cords. You could have a similar situation with water, where you could be plugging in connections to irrigate plants or divert water back into a system to get filtered, etc. I’ve also been looking a lot at how we design toilets and sinks and overall plumbing structures.

BB: Best case…. I think you always need humans on the ground managing and stewarding the landscape. Soon we’ll be using modeling and data flows to plan out how to develop but we need humans to manipulate that information to reflect visceral cultural and site-specific constraints.

So to me, the biggest challenge nowadays is that people don’t think that stewardship is necessary. They’ve eliminated that from the equation, thinking instead that we can build this bio-swale or green roof or some green system for the project instead. But it all needs human stewardship.