Though digital billboards — and the advertisements that would shuffle across their LED screens every eight seconds — seem like all but an inevitability for the near future, a few counties in Washington state are pushing back. Why? Suburban cities don’t want ‘em.

It’s been a tough couple weeks for Clear Channel, the Texas-based media conglomerate that’s seeking to make image-shuffling, highly lucrative digital billboards roadside and cityscape fixtures all across the nation.

In recent years, the e-board wave had seemed irresistible; in 2007 the Federal Highway Administration ruled that billboards that change images every eight seconds or so do not violate a federal ban on “intermittent” or “flashing” roadside advertising. Since then, according to Clear Channel, governments in 43 states have approved them– including, last year, Oregon, which used to be renowned for its tough billboard restrictions.

But now that wave has crashed and broken in Washington state. Even Clear Channel — which is owned by Bain Capital (of Mitt Romney fame) and other private equity partners — does not possess unlimited persuasive powers. Late last month both King County and the Washington Legislature tacitly said no thanks to digital billboards, and to Clear Channel’s offer of free emergency and missing-person alerts within its ad rotations.

As late as last September, the county’s assent seemed a done deal. A majority of County Council members had already voted in committee for Clear Channel’s proposal to convert most or all of its 21 conventional billboards in county jurisdiction to what one commentator calls “televisions on sticks.” But then the council received a late blast of citizen complaints and plaintive pleas from suburban cities south of Seattle, which feared they’d inherit the unwelcome billboards when they annexed more county territory.

Councilmembers decided to pause and reconsider (or, as they put it, undertake environmental review), then added restrictions on where the digital boards can be located. Now they’ve decided not to proceed at all “in the foreseeable future,” said Jeanne Keenan, an aide to County Councilmember Jane Hague, a prime sponsor of the legislation.

“Councilmembers Hague and [Larry] Phillips have decided not to reintroduce the legislation, which would have to be done by the end of January. Then they’ll be busy with the comp plan, and later the budget.”

Keenan says the councilmembers paused because of objections raised by several suburban cities that feared they’d inherit digital boards that they themselves wouldn’t allow in planned future annexations. But the council also received a late blast of comments from hundreds of residents who objected to adding a juiced-up form of commercial intrusion, visual blight and driver distraction to the roadways. Such complaints were enough to persuade Tacoma’s city council and mayor to reverse an earlier decision allowing Clear Channel to convert many of its boards there, and face the inevitable lawsuit.

No such legal rumbling in King County. Keenan says “the company” — Clear Channel — “was fine with that” decision not to go ahead. The council had already tightened the terms of a bill that would originally have let an owner swap out conventional printed billboards one-for-one for digitals capable of flashing thousands of ad messages per day. “As amended, the bill might have allowed only one digital billboard in the whole county.”

Even before that, the immediate stakes were fairly small: Clear Channel has only 21 billboards in unincorporated King County, and its effort to go digital there was seen as a stepping stone toward larger markets such as Seattle, with 520 billboards, and highways statewide, with even more. The company meanwhile worked its magic in Olympia, as usual pitching the conversion to what one commentator calls “televisions on a stick” as a boon to law enforcement and emergency services; hence the bill’s title, “authorizing the use of digital outdoor advertising signs to expand the state’s emergency messaging capabilities.”

Clear Channel and other members of the self-described “out-of-home advertising” industry ardently tout the lifesaving value of such capabilities. The Outdoor Advertising Association of America reports that, nationwide, billboard companies have posted more than 700 AMBER alerts for missing children since 2008, and aided in the apprehension of 47 fugitives. Last year it estimated that the FBI would use more than 40 million donated eight-second “message units” to disseminate its most-wanted list. 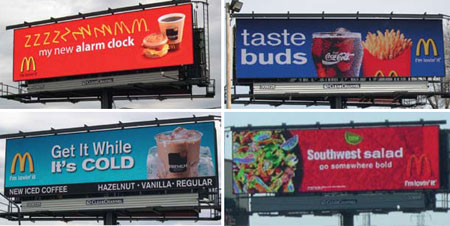 Billboard opponents, who recently mounted an online video campaign against the e-board proposal, question the value of such alerts. They contend that most of the crimes posted on the boards are actually long-ago cold cases rather than emergencies, and that flashing them across the landscape instills an exaggerated, even deceptive fear of crime. That AMBER alerts posted days or weeks after the fact are useless at saving children abducted by deadly sickos rather than feuding parents. And that nearly all the “emergencies” broadcast are really just routine highway alerts.

Nevertheless, last year’s “emergency messaging” bill made it through the Senate and cleared the House Transportation Committee, but died without a vote in House Rules. This year Clear Channel started in the House, with a similar bill HB 2636, and a new prime sponsor, Democrat Dave Upthegrove of Des Moines. At first it seemed the state might be more receptive. After all, the cash-hungry Washington Department of Transportation has been eagerly seeking ways to profit from digital advertising itself. It screens ads on LED screens mounted onboard ferries and in terminals, and last year began experimenting with banner ads on the state ferries website. WSDOT is now completing a study of potential revenues to be gotten from billboard fees, which would doubtless be enhanced if it opened the door to “televisions on sticks.”

But the closer legislators looked at what Clear Channel was offering, the less they liked it. “The emergency notification is a great idea in itself, but it’s no reason to put up electronic billboards all over the state,” said House Transportation Committee chair Judy Clibborn. “I don’t like them myself, and there are people who hate them a lot. Most of our members from the north drive through Fife and see [the flashing billboards installed on tribal land along I-5]. They don’t want more of those.”

What more “emergency messaging capabilities” for WSDOT? “They don’t need it,” said Clibborn. “We already have more digital alert readers than ever” — about 226 permanently installed, according to WSDOT, plus trailer-mounted portables for special circumstances. And so her committee hasn’t scheduled a hearing on HB 2636, and doesn’t expect to before a today’s deadline. “I don’t think it’s going anywhere this year,” she said. Clear Channel’s own lobbyist calls the bill “dead.”

But there’s always next year. The company says it hasn’t yet decided whether it will try again then.