Several attempts to include cities as a category worthy of consideration for the new breed of government financial bailout packages have been made recently. Now, a new letter from a non-profit urban revitalization group is making the rounds, collecting signers and support before trying its hand at asking for state money for ailing urban centers. 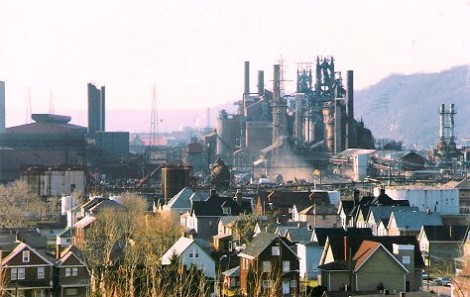 Somehwere between Wall Street and Main Street. Photo by Bob Dorsett.
There is still no real word on the outcome of the letter Philadelphia Mayor Michael Nutter’s hand delivered to the federal Treasury asking, on behalf of large American cities, for inclusion in the TARP “bailout”; the reported statement by Treasury Secretary Hank Paulson — that TARP is for financial institutions — is the last we heard of it, and it didn’t sound good. But bailout talks for the auto industry and the recent gathering of civic leaders around the national government’s financial meeting table complicate Paulson’s maxim in ways that allow for the Nutter camp’s post-delivery spin, that rendered the Mayor’s move as important and actionable, remains, at least, conceivable. Enough so that efforts to include cities in the supposed feeding frenzy of hand-out requests continues. The latest such effort is helmed by a non-profit group called Restoring Prosperity, self-described as “a joint effort of groups in six states and at the national level to develop and advance an agenda for revitalizing America’s older industrial cities.” Members have drafted a letter requesting funds for infrastructure projects and business stimulus for “older industrial cities and towns predominately found in the Northeast-Midwest,” and are in the process of accruing signers and interested parties for presentation to addressees Harry Reid, Nancy Pelosi, Mitch McConnell and John Boehner on January 20th. The magic post-date reflects an optimism in the Obama administration’s sympathies, as iterated in the letter:

It then goes on specify these promises for the President-Elect:

“This vision should direct the distribution of federal stimulus funds for infrastructure in ways that focus on fixing the existing infrastructure instead of building new highways; investing in public transportation and rail systems that can open up access to jobs while reducing vehicle miles traveled; rehabilitating and making energy efficient existing and historic structures; training workers for green jobs; addressing aging combined sewer overflows that spill pollution into our waterways and waste precious water resources; and investing in communities that have struggled to deal with foreclosed, abandoned and vacant properties that continue to pull down the value of housing while overwhelming local officials’ ability to provide services.”

The request differs from Nutter’s in its regional specificity, in the specificity of its planned uses for requested money, and in providing a (rough) cost-benefit analyses for its pro-retrofitting/anti-new-building plan. And while this gives the letter much less of a “if you give a mouse a cookie…” feel than Nutter’s, it’s very practicality and regionalism, as well as it’s signers, make it much less flashy than the mayor’s urgent walk up the treasury’s steps, which may also prove much less newsworthy. Still, with the work of Nutter’s letter and the recent mayoral roundtable as groundwork, the Restoring Prosperity letter could arrive at just the right time. Perhaps Henry Paulson will finally be able to see the crumbling concrete of cities through the fog of the ailing virtual non-money that he claims must be the primary target of government aid. Or perhaps he doesn’t have to, and can afford to continue to wait for his aid package to trickle down to those of us in the material world.