What Urbanists Can Learn From Foodies

What Urbanists Can Learn From Foodies

The sustainable food movement just may have created the playbook that urban advocates need.

This feature is an excerpt from Democratic By Design.

“Architects and urbanists frequently look with envy to the foodies for their huge cultural accomplishment. They have not only created a new American cuisine of amazing quality, but they have had an impact on the supermarket, where decent produce and tasty, nutritious products are much less of a rarity than they used to be.” — Dan Solomon, in Global City Blues

Those of us who spend our lives working to change cities would do well to learn from social movements that have come before — the sustainable food movement, for example. The analogy between cities and food is clear: in both cases, the changes we are trying to bring about require us to remake an entire industry while at the same time changing deeply held cultural tastes.

We are used to thinking about what it takes to make cities more ecologically sustainable and socially just – the whole nexus of city regulations and engineering codes, design practices and business models. But the sustainable food movement has faced just as much complexity in trying to change the way Americans eat, attempting to transform every step in the farm-to-table process, from agricultural techniques to restaurant menus.

In researching my new book, Democratic by Design, I looked at food and cities as case studies of how social movements bring about change — specifically as an approach that emphasizes directly creating new models, with the hope of proving them and ultimately scaling them up. This approach of building alternative institutions is very different from more commonly known progressive strategies like community organizing, policy change, or political campaigns. But in my survey of social movements from the agrarian Populists of the 1890s to the early affordable housers to organized labor, I found that the attempt to create working prototypes prior to political or regulatory changes was a recurring feature of American progressivism.

The idea is to create living examples of a better society. These projects can then be seen, studied, improved on, and copied. People can join them or support them. If the alternative institutions are good enough at what they are trying to do, they will expand and multiply. Eventually, some of them will actually begin to out-compete the mainstream institutions that they stand alongside.

But while alternative institutions represent a distinctive social change strategy, what I found is that the most successful social movements are able to bring different approaches together, integrating institution-building with more other forms of activism encompassing organizing, electoral campaigns and even legal strategies. The sustainable food movement is, to me, one of the most successful at this.

Many of the key moments in the modern food movement were also key moments of broader cultural change: the victory gardens during World War II; the publication of Rachel Carson’s Silent Spring in 1962; the founding of the union that would become the United Farm Workers, also in 1962. Changing the way we eat would eventually become one of the signal contributions of the lifestyle changes that spread from the counterculture in the 1960s.

The movement grew from the network of early health food stores and vegetarian restaurants to become a major force that ultimately would change the way Americans eat, at least for the middle and upper classes. In 1960, supermarkets had almost no fresh (much less organic) produce, and what they did have was often flavorless and wrapped in Styrofoam trays. Today, any corporate grocery store has an array of healthy food, from produce to cereal, coffee to dairy. The counter-cuisine became mainstream.

I marvel at the success of the food movement partly because it required so many changes in different parts of the food system. Farmers have had to grow their crops differently; stores and distributors have had to start offering different food for sale; new recipes had to be discovered or invented; and ultimately millions of individuals have changed the way they eat.

I also think it’s interesting that many of the key actors and institutions were entrepreneurs and small businesses. It wasn’t just activists, it was the people writing cookbooks, it was restaurants and grocery stores, farmers and manufacturers all contributing to a lasting transformation.

Many of the cultural changes were led by chefs – people like Julia Child, Alice Waters and Mark Bittman, who have an enormous reach into popular culture, far beyond anything celebrity architects have been able to attain.

The sustainable food movement contains lessons that could apply to many other social movements.

First, it did not require agreement about end goals. Some people were motivated by moral reasons, believing that sustainable food is better for the earth, while others were motivated by personal health reasons. The movement did not founder on questions of which motivation was the right one.

Second, it spoke to people’s self-interest in a way that appealed to a broad range of Americans. The sustainable food movement, perhaps uniquely among social movements, has a strong claim to be a path for direct, immediate personal benefit in the form of better eating. So we should acknowledge the power of self-interest in making the offerings of this movement appealing to people who are not necessarily politically engaged.

This observation may also suggest a limiting factor for this strategy: ultimately, the sustainable food movement will not be able to fully displace unsustainable food production simply by providing a better product, if for no other reason than the fact that healthy food is more labor-intensive and therefore more costly.

Many consumers, especially people with less money, continue to choose cheaper, less healthy, less sustainable options. The only way to make our entire food system sustainable will be to win in the realm of politics, by changing regulations on farming and food processing. But now that the model of healthy food has proven itself and created a constituency, this is an argument that will be easier to make. Indeed, with food, as with so many other issues, the alternative institutional model of change works best as part of a broader set of strategies that includes political and regulatory change.

Finally, the idea of working to transform an industry as the right “unit of analysis” is interesting. It suggests that working at the level of industries or sectors of the economy, where progress on one piece mutually reinforces other pieces, could be extremely productive. The leaders of the sustainable food movement were not trying to change the economic system; they were trying to change the food system. This sectoral approach is a very promising way for activists to connect their projects to big, broadly transformative agendas.

We shouldn’t overstate the accomplishments of the sustainable food movement. While most Americans eat better than they did half a century ago, only a small portion of farming uses organic practices, the price of the healthy food is often so high that only the relatively well-off can afford it and many farmworkers continue to endure harsh working conditions. Nevertheless, it’s an important example of a social movement that managed to use many different strategies to bring about some significant changes.

Our features are made possible with generous support from The Ford Foundation. 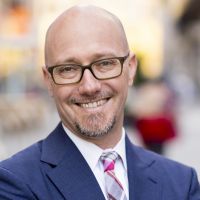 Gabriel Metcalf is the President & CEO of SPUR. Under his leadership, SPUR has grown dramatically in influence and membership. Before becoming head of SPUR 2005, Gabe headed up SPUR’s policy and advocacy work for five years. A prolific writer and speaker, Gabriel earned his Master’s degree in city planning from the University of California, Berkeley’s College of Environmental Design.