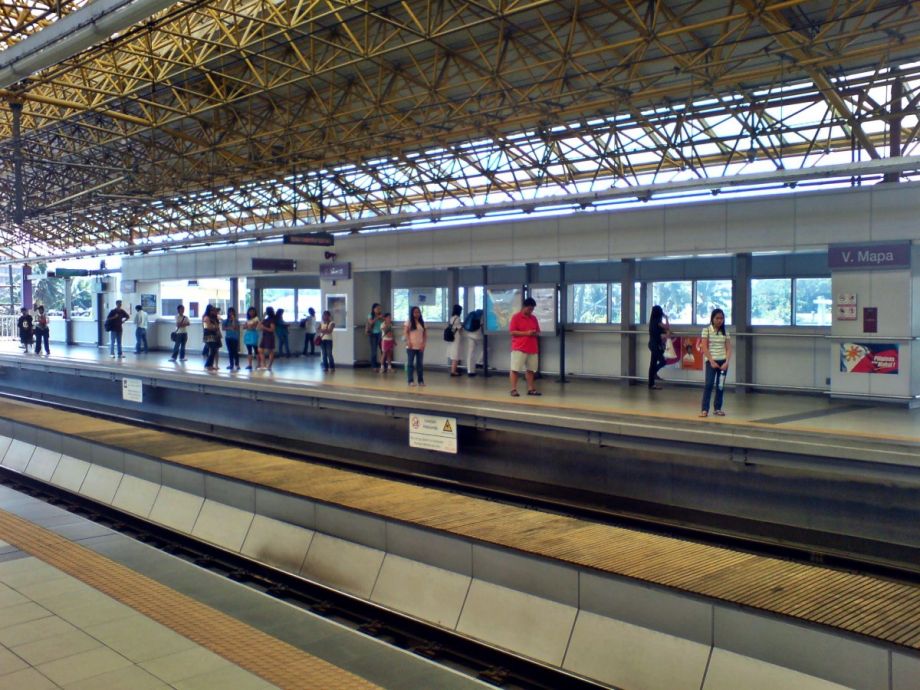 Passengers wait for transit in Manila. (Photo by Sky Harbor)

Shovels Go in Ground to Start Work on Manila’s First Subway
A little more than 45 years after it was first proposed, the first subway line in Manila started down the path to reality with a ceremonial groundbreaking on Feb. 27.

Metro Report International reports that the groundbreaking took place on the site of the Metro Manila Subway’s future depot in Valenzuela City. The 36-km (22.4-mile) line will run from Quezon City in the north to Taguig City in the south, with a spur at the south end serving Ninoy Aquino International Airport Terminal 3. The spur will make the line the first rail transit line in the capital city to directly serve its airport.

The subway will also connect with a north-south commuter rail line being developed.

The new line, which will become Line 9 (the fifth to be placed in service) of the Metro Manila Rail Transit System, is being built by a consortium consisting of Shimizu Corporation, Fujita Corporation and Takenaka Civil Engineering Company, all of Japan, and the Filipino EEI Corporation. The Japan International Cooperation Agency is loaning the Philippine Department of Transportation 365 billion Philippine pesos (U.S. $6.97 billion) in order to build the line.

An article in the Nikkei Asian Review notes that Japanese firms are also involved in building the commuter line and restoring Manila Rail Transit Line 3, which was Japanese-built but had deteriorated under Filipino, then South Korean, maintenance. Total cost of all the projects combined: 1.17 trillion pesos (U.S. $22.4 billion).

The three stations at the line’s north end will enter service first, with completion scheduled for 2022. The entire line should be operational by 2025. Projections say 370,000 passengers are expected to use the line daily within the first year after its completion; the line is designed to handle 1.5 million riders a day.

Initial Segment of Ahmedabad Metro Opens
International Railway Journal reports that the first section of Phase 1 of the Ahmedabad metro opened for service in the Indian city on March 4.

Indian Prime Minister Narendra Modi opened a 6.5-km (4-mile), 4-station segment of the east-west line from Vastral to Apparel Park with a ribbon-cutting and a ride on one of the driverless trains.

Work on the metro began in 2015, and the first phase is slated for completion in 2023. Phase 1 will encompass 40.03 km (24.87 miles) of route: 18.87 km (11.72 miles) of the north-south line, with 15 stations from Motera Stadium to APMC, and 21.16 km (13.15 miles) of the east-west line, with 18 stations from Vastral Gam to Thaltej Gam, including the central transfer station at the Old High Court Interchange. Four stations and 6.5 km (4 miles) of the east-west line from Apparel Park to Old High Court Interchange will be underground, while the rest of the system will be elevated.

Las Vegas to Put Elon Musk’s Tunnels to a Real-World Test
The general reaction among transportation professionals to Elon Musk’s demonstration tunnel in Los Angeles was: Maybe the tunneling method has promise, but those driverless cars won’t put a serious dent in the “soul-crushing traffic” Musk said he wanted to eliminate.

That doesn’t mean the idea won’t have any practical use, though. According to the Associated Press, the Las Vegas Convention and Visitors Authority will recommend that Musk’s Boring Company build a two-tube tunnel 1.6 km long (about 1 mile) to whisk conventioneers from one end of the city’s sprawling convention center to the other.

The passengers will ride driverless electric cars through the tunnels; possible vehicles include the Tesla models X and 3 and a vehicle capable of carrying 16 passengers at once. The vehicles would stop at four stations, one at the entrance to each of the convention center’s four exhibit halls.

“It’s really innovative. I think it will be an attraction in and of itself, frankly,” Steve Hill, president and CEO of the Las Vegas Convention and Visitors Authority, told the Associated Press.

The convention center is being expanded to the point where visitors can eventually log 3.2 kilometers (just shy of 2 miles) walking from one end to the other.

The tunnels would cost anywhere from $35 million to $55 million to build. While the tunnel technology has yet to be used commercially, Hill says he is confident the Boring Company can deliver on its promise. In fact, the authority is so confident that this system will work that it is already discussing extensions to downtown, the Las Vegas Strip and McCarran International Airport.