Elon Musk Shows Off His Demonstration Tunnel – Next City 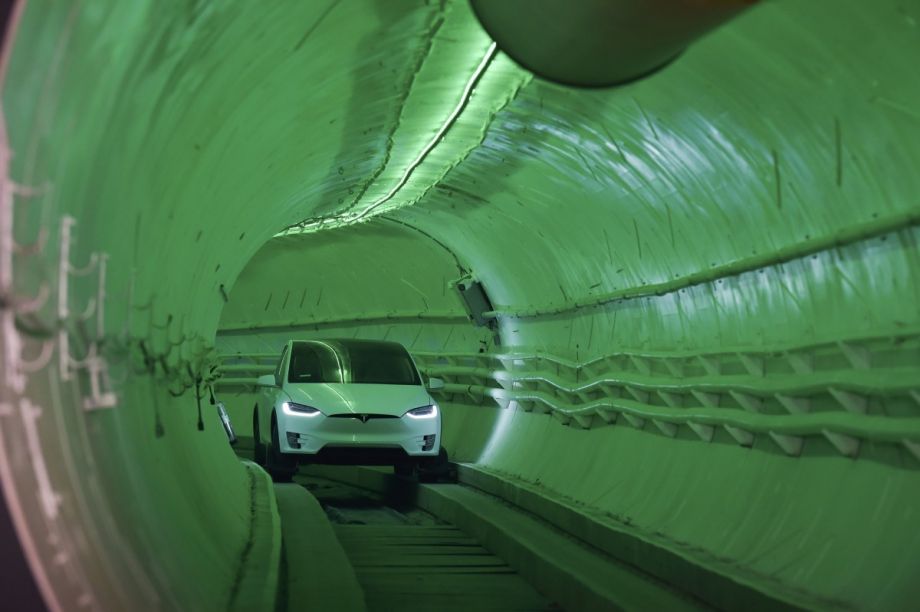 Musk unveiled his underground transportation tunnel on Tuesday, allowing reporters and invited guests to take some of the first rides in the revolutionary albeit bumpy subterranean tube — the tech entrepreneur's answer to what he calls “soul-destroying traffic.” (Robyn Beck/Pool Photo via AP)

Nothing Boring About Elon Musk’s Test Tube Launch. But About That Tunnel…

Silicon Valley serial entrepreneur Elon Musk dazzled a crowd of media types when he showed off his completed 1.14-mile tunnel beneath the Los Angeles suburb of Hawthorne on Dec. 18.

“This is better than Disneyland,” one reporter said about the ride he took through the tunnel in a specially outfitted Tesla Model X. “I have not been to Disneyland, but this seems like a scathing indictment” of Musk’s vision for his transportation tunnel, wrote Elizabeth Lopato in The Verge.

Indeed, much of what Musk said his vision of a network of tunnels beneath Los Angeles would do to end “soul-destroying traffic” sounded straight out of Fantasyland.

Let’s start with his description in a Tweet of the guide-wheel-equipped Tesla as a “train.” That it wasn’t, and it won’t be by any stretch of the imagination unless several of these autonomous electric cars are yoked together at the start of the trip. Musk is now touting these vehicles as the backbone of his urban transport solution — gone are the 16-passenger electric pods he originally said would operate in the tunnels.

Next, let’s consider what Musk says his system will be able to do when fully developed: carry 4400 of these autonomous vehicles per hour at speeds of 150 mph, with vehicles joining and leaving the stream via elevator shafts. In another series of Tweets, an investment advisor from Puerto Rico showed how this claim is mathematically impossible. (For starters, the vehicles couldn’t maintain that speed while other vehicles were entering and leaving the stream.) Musk has touted his plan as an improvement on subways, but as Henry Grabar wrote in Slate, even if Musk could achieve his desired capacity, he would move only half as many people per hour through his tunnel as London’s Victoria Line carries now.

Where Musk may have contributed to the advancement of urban transport is in lowering the cost of boring a tunnel. Musk stated that his 14-foot-diameter tunnel (about half the diameter of a standard one-lane highway tunnel but three feet greater than the diameter of a London Underground deep-tube tunnel) cost only $10 million per mile to dig. And while it took him 18 months to dig it, thanks to the usual on-the-ground hurdles The Boring Company needed to clear, Musk has developed two newer boring machines that should make their way through the earth faster than the one that dug this tunnel did.

However, as the Los Angeles Times’ Laura Nelson noted in her description of her ride through the tunnel, that $10-million-per-mile figure left out research, development and equipment costs, and it also may not have included property acquisition or labor. Nonetheless, even if all those costs are factored in, the total cost per mile was likely less than the $200 million or more per mile many subways now cost to build — and definitely less than the $2 billion per mile New York spent on the Second Avenue subway tunnel. (The New York Times, of course, assumed all subways would cost as much in its report.) But if Musk really did make good on his cost savings, his Boring Company could stand to make a real contribution to the advancement of urban transport worldwide, even if its tunnels never carry another electric car with guide wheels.

Israeli Officials Unveil Plans for a Metro in Tel Aviv

The system will overlap with the LRT network in central Tel Aviv and some of its suburbs, but it will also provide rail service to parts of the metropolis the LRT lines won’t, including Ra’anana, Rehovot, Rosh Ha’ayin and Kfar Saba, plus areas targeted for future development. Government officials project that the system will carry 1.5 million passengers every day and 450 million a year.

Metro Report International reports that the Hungarian government has given the green light to a 1-trillion-forint (US$3.57 billion) package of extensions and improvements to the Budapest regional rail network.

Two lines, H6 and H7, will be connected with a new stretch of track at Közvágóhíd and extended via tunnel northward from the current H6 terminus at Borános tér to Kálvin tér. Lines H5, H8 and H9 will all be renewed and upgraded, and the plan will also study a possible connection between Lines H5 and H6/H7 via a tunnel under the Danube in the future.

The tunnel extension of Lines H6/H7 is envisioned to connect to Budapest Metro Line M5 down the road. The Hungarian government intends to seek European Union funding for this project in the 2021-27 budget cycle. The EU is partially funding this package of improvements as well.

Two other components of this package are the replacement of all 98 of Budapest’s EMU regional rail cars, whose average age is 42 years, and a feasibility study for an underground connection between the mainline railroad terminals at Déli and Nyugati, which will allow through-routing of intercity trains between eastern and western Hungary.