‘Wild Urbanism’ in the Middle of Putin’s Moscow – Next City

‘Wild Urbanism’ in the Middle of Putin’s Moscow 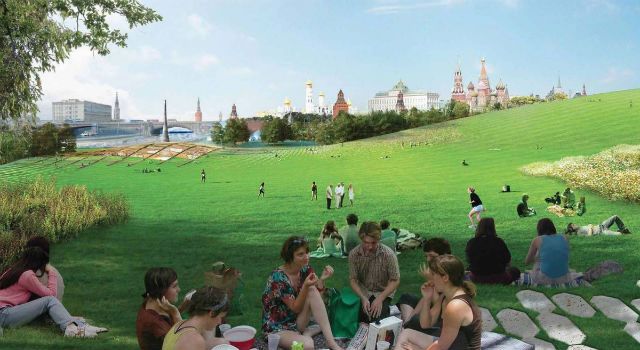 Just beyond Moscow’s Red Square, past the iconic domes of St. Basil’s Cathedral and the walls of the Kremlin, a new landmark is planned for Russia’s largest metropolis. In a nod to the city’s increasingly globalized identity, the new landmark will not come solely from the church or government. Instead, it will be a 13-acre park open to everyone and developed by a team of internationally renowned architects best known for designing the glam High Line in Manhattan.

Inspired by the ecological diversity of Russia, Zaryadye Park will be the first new park built in Moscow since 1958, rising on a former Jewish ghetto once slated for Stalin’s tallest skyscrapers.

President Vladimir Putin initially proposed the park, remarkable for its design as well as its origin, in 2012. Like the upcoming Sochi Olympics and parks in many other capital cities around the world, Zaryadye’s purpose is nationalistic, intended to draw attention to the grandeur of Russia. Its patriotic vision makes it all the more surprising that Moscow would hold the city’s first international design competition to plan the park. Eighty-seven teams from 27 countries participated. The team led by New York firm Diller Scofidio + Renfro won with a proposal based on the principle of “wild urbanism.”

Under the vision hatched by Diller Scofido + Renfro and Putin’s administration, free-flowing walkways and permeable pavers will encourage exploration through park areas designed to recall Russia’s varied landscapes of tundra, steppe, forest and wetlands. An amphitheater for year-round use and a 500-car underground parking garage were also included.

The $200 million park is expected to take between two and three years to move from the drawing board to reality, and in that time it’s likely the design will evolve even further. City planners expect to incorporate ideas from two of the other shortlisted concepts, created by Russian firm TPO Reserve and Dutch firm MVRDV. A separate firm will be chosen to create the park’s final design. In addition, the city government is likely to express its own prerogative. For example, page 62 of the project’s request for proposals states that “The topography of the Park implies the inclusion of a sled[d]ing slope, which has been a traditional ingredient in many Russian parks. This is to be one of the Park’s obligatory functions.”

With the development of Moscow’s first 21st-century park, the long-fenced land alongside Red Square will undergo a makeover very much in step with the times. It’s an appropriate fate given its shape-shifting role in history dating back to the 12th century, when it was a market district between the Kremlin and the Moskva River. (Zaryadye means “behind the rows,” referring to the Kremlin Trading Rows near Red Square.) Between 1826 and 1856, the Zaryadye neighborhood was the only area in Moscow where Jewish people were allowed to live. In the late 1940s, most buildings near Zaryadye were torn down to make room for Stalin’s planned Zaryadye Administrative Building, which would have been the tallest of the Stalinskiy Vysotki (Stalin skyscrapers) built between 1947 and 1955.

When Stalin died in 1953, the skyscraper project was abandoned and the area faltered under government ownership. Until 2006, Zaryadye was the site of the city-owned Rossiya (Russia) Hotel, the largest hotel in the world until 1990 and the largest in Europe until its demolition as part of former mayor Yury Luzhkov’s “ambitious plan to rid the Russian capital of the worst of its Soviet architecture,” in the words of the BBC. After the high-profile demolition, city officials slated it for a retail and hotel complex, but economic challenges kept the plan from coming to fruition. Since then, a giant fence has enclosed the space.

The park is likely to be a coveted public amenity. Moscow ranks among the most expensive cities in the world, and property in the center is especially valuable. Rather than a “wedding cake” plan where housing and commercial density peaks at the center, Moscow is organized like an arena, with most residential and commercial real estate arrayed in a densely populated ring around the historic core. With a system of roads and metro lines radiating from the center and encircling the core, the Kremlin is afforded a geographic centrality that maps its political power onto the plan of the entire region.

Diller Scofidio + Renfro’s experience with other prominent and long-vacant urban spaces provides an interesting counterpoint to Zaryadye. Unlike the High Line, which came about through community-led activism, the Zaryadye project is the vision of Putin and other government officials. That said, Zaryadye Park has the potential to become an extraordinary community space at the heart of Moscow’s urban ecology.