Why There Are More Roots Sprouting on Rooftops in New Orleans 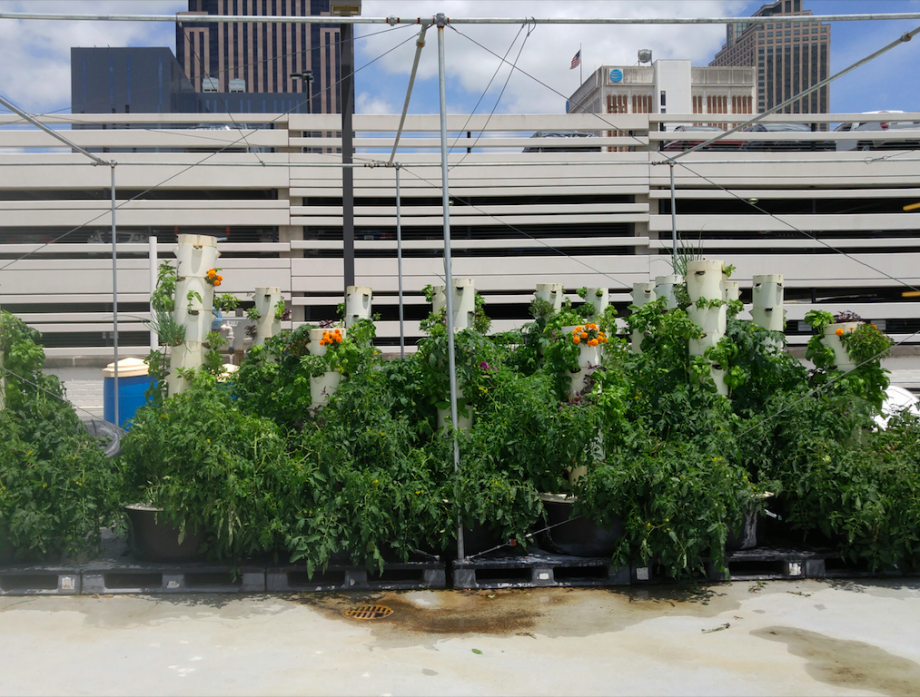 Elisa Bach says she only buys older model cellphones off EBay. “I know how tank-prone my phone is … if I can’t replace it for around $100, it doesn’t fit my lifestyle nor career choice,” says Bach, who uses specialized aquaponics tanks to grow herbs and vegetables for sale at the Rouse’s Central Business District grocery store in the heart of New Orleans.

What makes this garden unusual, though, aside from the fact that the garden doesn’t use soil, is that it’s perched on top of the store itself. Rouse’s, a local grocery chain, reached out to the Recirculating Farms Coalition in 2012 to ask for help taking advantage of its roof space to grow organic produce it could just take downstairs to sell to customers.

“They were ahead of the curve,” Bach says. There were practical considerations behind the plan. “Herbs are always better cut fresh,” Bach says. The move fits into a larger local trend focused on growing and eating locally.

Marianne Cufone founded the Recirculating Farms Coalition, which has been pushing for practical solutions that can enable communities to produce more of the basic foods they need themselves. Supporting and encouraging rooftop gardening has become part of their toolset.

“The big challenge in land access is, especially here in New Orleans, but all over, is that land is valuable,” says Cufone. “And even if it’s not valuable now, people acquire it, sit on it, and wait for it to become valuable. And that is especially an issue in New Orleans. We have something like 25,000 empty lots, and you can’t get your hands on it no matter who you are unless you’re a developer or someone with lots of cash.”

The benefits can extend beyond access to healthy food. Cufone also says that rooftop gardens can help absorb rainwater, a crucial issue in flood-prone New Orleans, and that they can help reduce energy use by insulating the building. New Orleans has company in rooftop farming with Brussels, Amsterdam, Chicago and Brooklyn some of the others that have begun to grow vertically.

Bach, a former teacher with what she describes as a strong background in botany, now serves as part-teacher, part community-liaison at the Rouse rooftop garden.

“I just had a group of autistic-spectrum young people come up yesterday,” Bach says. “I have been working with the teachers who bring kids here, and when they visit, of course, learning doesn’t happen unless you continue that same learning aspect in the classroom. If I know what they want me to cover, I can give them scientific experiments, lesson plans.”

The community connections include adults, and Bach has organized garden clubs, herb societies, and other group tours.

Longer-term projects are a priority for New Orleans rooftop farming. Cufone says that one result of steep land prices is that every farmer in the city, including her, has an eviction story. In her case, Cufone had a lease for a piece of land where she developed a farm that became a focal point for neighborhood activity. But the activity made property in the area more valuable. Her farm was evicted in favor of a condo development. Ironically, that project never happened, and now the lot is abandoned.

Locations with a direct interest in what’s grown on their rooftops, like the grocery store, are turning out to be a safer bet. The city’s convention center contracted with Erika Nolan’s Instar Farms to use part of its vast space to grow food for its in-house commissary. Nolan says that tourists on the Mississippi River Walk often pause to take in the lush plants sprouting from a 220-foot bed on the convention center’s roof.

“We’re growing everything … a huge variety of herbs, last season we did carrots, tomatoes, cauliflower, broccoli, kale, collards, swiss chard,” Nolan says. “This season we’re focusing on fewer varieties of vegetables. That way we can get more of those vegetables.” Edible flowers such as borage, marigolds, and chamomile are also part of the crop.

The massive bed is raised, Nolan says, because “you don’t want the soil to be in contact with asphalt on the roof. The reason for that is because anything that touches the soil is absorbed and is then leached into the fruits and vegetables that you’re growing.” The other reason, she says, is so that drainage can happen properly. “That way, soil just doesn’t start leaking out onto the rooftop and create a big, muddy mess.”

It’s also less prone to putting cellphones out of commission.