Why London Will Struggle to Become a Cycling City – Next City

Why London Will Struggle to Become a Cycling City 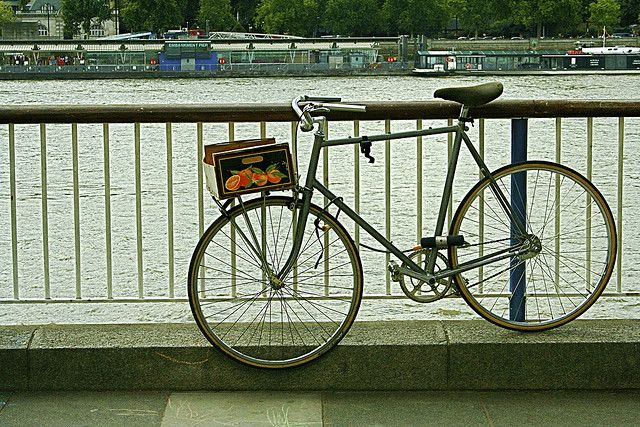 Editor’s Note: This is a special guest post by Joe Peach, the founder and editor of This Big City – a sustainable cities blog exploring ideas for our urban world. Joe works as a freelance writer and all-round creative in central London, as well as studying for a Masters in Sustainable Communities and the Creative Economy at Kingston University London. To visit his site, click here.

Boris Johnson – London’s cycle-obsessed Mayor – has a serious case of Europe envy. Located just a few hundred miles away from the British capital are Amsterdam in the Netherlands and Copenhagen in Denmark – two cities with such a well-integrated approach to urban cycling that they respectively see 32% and 40% of all trips taken on bike. London, on the other hand, manages around 2%.

But people of London, worry you not. Boris is here with a plan to ‘change the urban landscape of the city’. A plan laced with ambitious statistics and cycles lanes so blindingly blue that it couldn’t possibly fail. Unfortunately for both the Mayor and the city’s inhabitants, this plan is not enough to turn London into a cycling city like that of our European neighbours.

Whilst Johnson has raised the profile of the London cyclist, his efforts are not the city’s first. Feeling positive about the future of the bicycle, the Borough of Ealing once said:

There are signs of change. Top managers and Council leaders are starting to understand the significance of cycling to their priorities.

The London Cycling Campaign have a five year plan entitled One in Five by 2025. The goal of this campaign is as clear as it is ambitious – 20% of trips taken by bike by the year 2025. Whilst one can’t help but wonder whether this title was chosen because it rhymed, the more important question is what is being done to achieve this goal?

Johnson has invested the majority of his £110 million cycling budget on two projects. A cycle hire scheme for the city and a network of 12 ‘cycle superhighways’ connecting outer boroughs with the city center. Familiar to some North Americans, London’s cycle hire is almost identical to Montreal’s Bixi apart from the fact that it operates all year round. It has also been similarly successful, but currently operates only within the city center- Zone 1 as it is known locally. Despite plans to extend eastwards in time for the 2012 Olympics, Johnson has acknowledged that the scheme will not be introduced to all boroughs.

This city-center focus is also evident in the ‘cycle superhighways’ – wide and often-separated bright blue lanes which connect the outer boroughs to London’s center. Two are currently active, with two more scheduled to open each summer until the clock-like network surrounding London is complete.

Prioritizing the central area – whilst understandable due to the vital role in plays in London’s economy – is going to cost the city as it attempts to become more cycle-friendly. Both Amsterdam and Copenhagen have been able to achieve high bicycle usage figures by making it part of everyday routine. Unless your life revolves around London’s city center, you cannot depend on the cycle hire scheme for everyday use. Similarly, if you don’t work in the center of London, the ‘cycle superhighways’ will be less practical.

In addition to this, London’s roads are not built for the needs of cyclists. Consistent cycle lanes are nothing but a dream, whereas frequent pot holes are a sad reality. Despite one-way roads in many European cities being bi-directional for cyclists, London is yet to embrace this simple change that would make cycling through the city so much easier.

However, even if all these issues were overcome, London would still struggle to become the cycling city its Mayor longs for. Both Copenhagen and Amsterdam are manageable cities with populations and geographies a fraction of London’s, making the task of creating a cycle-friendly city achievable. Combine the challenge of London’s size with its city-center focus and this city’s struggle to become a cycling city is easy to understand. With two-thirds of its population living in outer boroughs, but two-thirds of the city’s GDP coming from the city center, commuting to work is a reality for most Londoners. Factor in the size of the city and cycling becomes less practical.

Despite these problems, cycling will undoubtedly become more popular in London. In fact, since Johnson became the Mayor in 2008 it already has, no doubt assisted by recent infrastructure developments. However, the goal of 20% set by the London Cycling Campaign is still a long way off, and matching the 32% and 40% figures of Amsterdam and Copenhagen is nothing but a pipe-dream.

Britain can long for a capital city where cycling infrastructure is consistent and well-integrated, and its city-center obsession evolves, but this is unlikely. London’s train network and underground are built to ferry people form the outer areas into the city, and now the cycle superhighways do the same. Scheduled to open in 2017, the high-speed Crossrail service will soon connect those living even further out with London’s center. The culture of our transport network is built around the notion of bringing people in, and due to the permanence of transport infrastructure, this is unlikely to change.

In a city as big as London, there is little room for a bicycle.