What’s Up With the Governor of Pennsylvania Running Away from a Philly High School? – Next City

What’s Up With the Governor of Pennsylvania Running Away from a Philly High School? 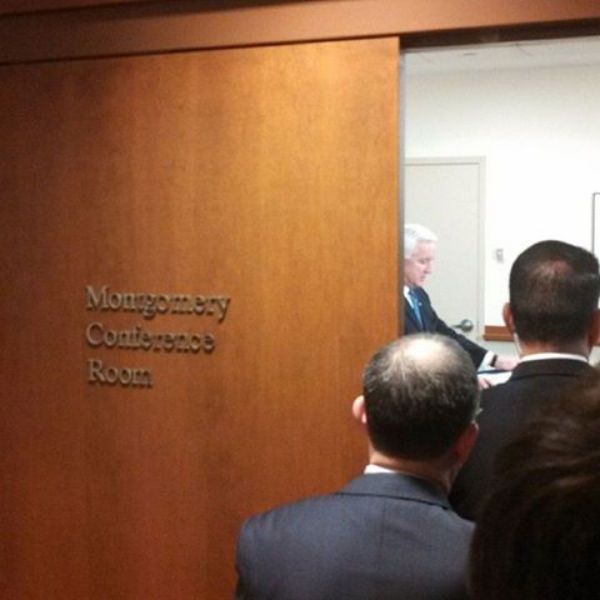 Tom Corbett giving a press conference at The Bellevue in Center City Philadelphia, after not appearing at Central High School a few miles to the north. Credit: Jake Blumgart

“I don’t run from anything,” Pennsylvania Gov. Tom Corbett said on Friday, after running away from a planned event at Central High School in North Philadelphia. Speaking at a press conference several miles to the south, held at the Philadelphia Chamber of Commerce’s headquarters in The Bellevue, a swanky Center City office building, Corbett insisted, “I make decisions head on, but I was not going to be a distraction to the school day or the school students.” The students may well have been distracted by the fact that they had waited for a speaker who cancelled at the last minute.

Education has dogged Corbett since the early days of his administration, when he proposed a $1.2 billion cut to public school funding in his first budget. A crippling reduction exceeding $865 million made it through the legislature, with the poorest school districts bearing the brunt thanks to the elimination of a mechanism that provided more money for schools with greater needs. (As the Education Law Center put it, “the cuts have been up to 10 times larger in poor districts on a per-student basis.”) Now, in a difficult election year, the Philadelphia Inquirer reports that his budget address early next month will contain between $100 million and $200 million in restored education dollars, funded by pension reforms.

Friday’s event at Central could have been another aspect of Corbett’s attempt to improve his image on public education. At the planned presentation ceremony, he would have given the Governor’s Award for Excellence in Academics to three high schools: Central, Masterman, and George Washington Carver. This comes during a school year where the Philadelphia School District faced a budgetary gap of more than $300 million, forcing deep cuts. Now many schools are forced to share nurses, counselors and other essential support staff. Funding for most extracurricular activities has been zeroed out, while arts, music and physical education have been decimated.

“I’m so grateful to have gone to a school like this, but it seems so selfish and opportunistic for him to come to Central when one of the first things he did in office was to slash education spending,” says Isabella Levy, who graduated from the school in 2012. She describes paper shortages and other problems with school supplies during her senior year and says that her friends in the years below her have had trouble getting help from college counselors due to staffing shortages.

Long before Corbett or the recession, Pennsylvania’s school funding formula has been unfair to districts with higher percentages of low-income and immigrant students, populations that often require greater attention and assistance. Philadelphia public education budget has also been harmed by a gargantuan and largely unregulated charter school sector which, as City Paper reports, currently eats up almost a third of the district’s budget. An impoverished tax base, fluctuating state funding and the astronomical rate of charter growth have made budgetary turmoil the norm for a long time, but Corbett’s cuts made things far worse.

“I’ve got 23 grands and seven great grands in the School District,” says Carol Henry, explaining why she protested Corbett’s visit to Central. Henry grew up in North Philadelphia and attended public schools. “We had sewing classes, we were taught manners, and how to do things at home. Now they’re even taking away music, taking everything that’s decent out. And why? I just don’t understand it.”

It’s odd that Corbett decided against facing Henry and the relatively small group of fellow protestors who waited at Central. The activists met at 9:30am, when most people are at work or in school. There were, tops, 200 people. Many of them were middle-aged if not older. Indeed, this could have been a public relations win for the governor. This would have been his first visit to a Philadelphia public school to, in his words, celebrate the successes of the three institutions in question. But instead of giving the awards to the students himself, Corbett presented it to Superintendent William Hite and instructed him to “take the banners to the schools and celebrate with the students as we would have liked to.”

Corbett’s press conference at The Bellevue was closed to everyone but the media. (One parent made it to the event, only to be turned away. “This is an event about public schools that isn’t open to the public?” she asked.) Even in the inner sanctum of the Chamber of Commerce, the press conference had an airless feel. Only one of the double doors was opened, but when the small, strictly suit-and-tie crowd tried to open the other, the governor’s staff shut it again.

Corbett’s half-hearted attempt to improve his record on public education comes as Republicans across the country have been trying to depict themselves as allies of the poor and working-class. In the wake of Mitt Romney’s now-infamous denunciation of 47 percent of the population as worthless moochers, the party wants to show that conservatism isn’t heartless. Rising stars such as Paul Ryan, Marco Rubio and Rand Paul have all recently insisted that their party is the true ally of working America, before trotting out a series of platitudes about charity and marriage as the cure for what ails the country.

Corbett’s attempts to make nice on public education are just as vacuous and can be seen as a similarly desperate attempt to rebrand in the face of persistent opposition. Unlike the conservative go-getters entrenched in safe House districts or recently won Senate seats, Corbett faces an uncertain reelection this year. The most recent poll, from late December, showed him losing to almost all of the many Democrats who want to challenge him. A late November poll showed less than 25 percent of voters approved of his job performance.

The protestors at Central were clearly giddy at his weakness. “He’s done a great deal of damage and needs to be replaced,” says Steven Bailey, a former principal with the school district. “In my opinion he is not fit to be governor of the state of Pennsylvania. Children should be a higher priority than privatizing the sale of alcoholic beverages or the lottery.”