What You Can’t See From a Train Window – Next City

What You Can’t See From a Train Window 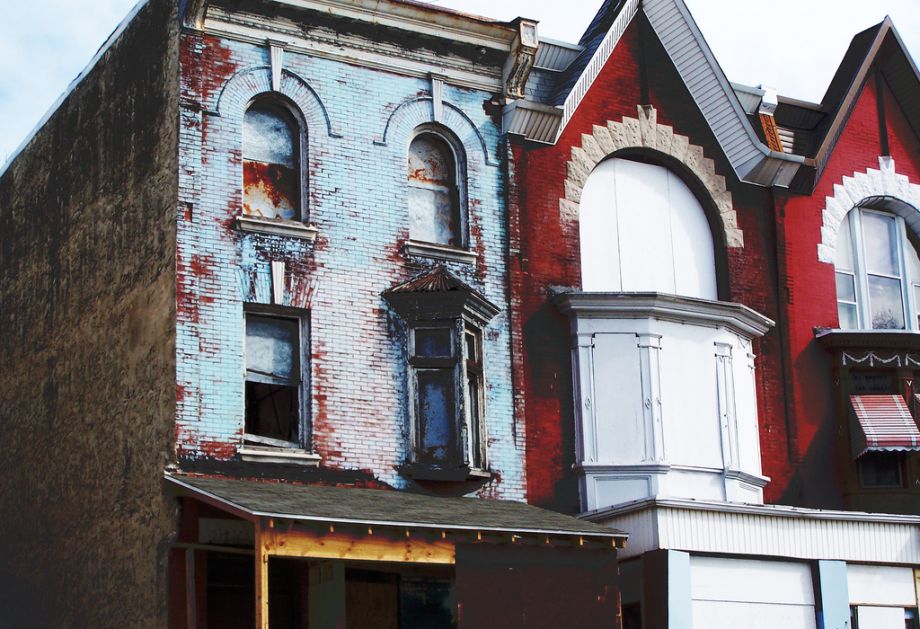 This past weekend, the New York Times Magazine published a photo essay that purports to show “a true picture of the U.S. economy.” It was shot along the Amtrak corridor in places like Baltimore, Philadelphia and Newark, cities where the industrial core never recovered after we mechanized most manufacturing jobs and outsourced much of what else was left. The images of a store that sells used tools, neglected infrastructure and abandoned houses were supposed to be shocking, I suppose. But the Times is coming late to the game. Indeed, Next American City has been focused on these cities and their challenges for, um, a decade.

As someone who lives in Philadelphia but grew up in New York City, I found the Times’ position that the economies along the Amtrak corridor are nothing like New York or D.C. as typical of New York provincialism. I reject the underlying thesis of the photo essay, which is that — according to the view from Amtrak — cities like Philadelphia and Baltimore have wretched economies, are poor and are radically different from New York or D.C.

The facts suggest otherwise. D.C. is one of the poorest cities in the country — you just wouldn’t notice if it you’re stuck near Union Station. In fact, D.C.’s poverty rate and that of Philadelphia are about the same, at just under 29 percent; meanwhile, New York City’s poverty rate is 21 percent. The difference is that New York’s poverty can’t be seen from a train window. Instead, dense areas of poverty can be found in neighborhoods like Brownsville or the South Bronx (areas of the city that, not surprisingly, lack good transit connections).

As for unemployment, Philadelphia and New York are about the same, at 8.4 and 8.5 percent, respectively. Washington, D.C.’s unemployment rate is 8.8 percent. In other words, New York and D.C. just hide their inequality better.

Sure, there is a vast difference between the employed and affluent in New York and D.C. and the cities that line the coast between them, but there are more similarities than the photo essay would lead you to believe. Our cities’ economies look strikingly similar except for the top 5 percent, which is vastly more moneyed in New York and D.C. Unfortunately, Adam Davidson, whose essay accompanies the photos by Pieter Hugo, is writing from from that perspective, with little evidence he’s walked around and talked to people in Philadelphia or Baltimore.

Where Davidson throws his hands up and wonders how places in the “Empire of the In-Between” will ever rebound, I’d like to propose a few solutions that are specifically related to the condition of Amtrak and what differentiates the cities along its corridor.

1. First of all: The neighborhoods along the Amtrak corridor are some of the worst in Philadelphia and Baltimore precisely because they’re along the Amtrak corridor. These buildings have been blighted because they have commercial, passenger and freight traffic running through at all hours of the day, not to mention some pretty serious electrical wires and substations located nearby. Philadelphia and Baltimore should find ways to incentivize homeowners to move away from the train tracks into better resourced neighborhoods and rezone the neighborhoods near rail for commercial uses. We all recognize that the view from Amtrak is awful, but we need local officials and designers to think seriously about solutions that both mediate the trains’ impacts on local citizens and change riders’ misperceptions of cities along the tracks. This could even come under the purview of the city’s business development organizations and visitors bureaus who spend tons of money marketing the city but forget what an impression the train ride makes.

2. Maximize the impact of locating industry along rail by making rail accessible to manufacturing again. There’s a funny moment on New York’s High Line when part of the railroad-turned-park goes straight into a building that used to be a warehouse. That’s how integrated manufacturing and rail infrastructure used to be. These days, most manufactured goods travel by ship or truck. And efforts to improve high-speed rail and freight access are moving along unsuccessfully and independently. Revisiting the country’s freight and passenger rail strategy at the same time could be a way to boost the country’s economy and sustainability. (See this week’s Forefront story for the perils of investing solely in ports.)

3. Philadelphia and Baltimore’s housing stock look so bad because they’re old. Better tax credits for adaptive reuse are essential to the rebirth of these cities. If you want to redevelop a commercial building in any of these eastern seaboard cities, there are some historic credits available, but not enough to sway most developers from building new construction on a greenfield. More importantly, there are no tax credits or special loan programs for rehabilitation of old, single-family residential buildings. To use my own house as an example: It would cost $10,000 to upgrade the 1960s windows and door on the front of my 1830s house to meet historic codes. Because that’s more than I can afford in the near future, I’ve avoided restoring my facade, even though new windows would not just look better but be more efficient. If we want our old cities to become more attractive, we should develop an urban rehabilitation credit and loan program geared toward improving the aesthetics and efficiency of these old homes.

The solutions for these cities require a bit more familiarity with the particular problems of daily life in the Mid-Atlantic — far more than anyone could ascertain from an Amtrak train window or the New York Times building in Midtown Manhattan. Davidson’s piece should have exhorted people not to generalize about what’s going on these cities, but rather to get out and see what’s really going on in them. If it’s bad here, it’s bad just about everywhere. Those train windows might actually be mirrors.