Vancouver Is Making Vibrant Public Spaces Out of Back Alleys 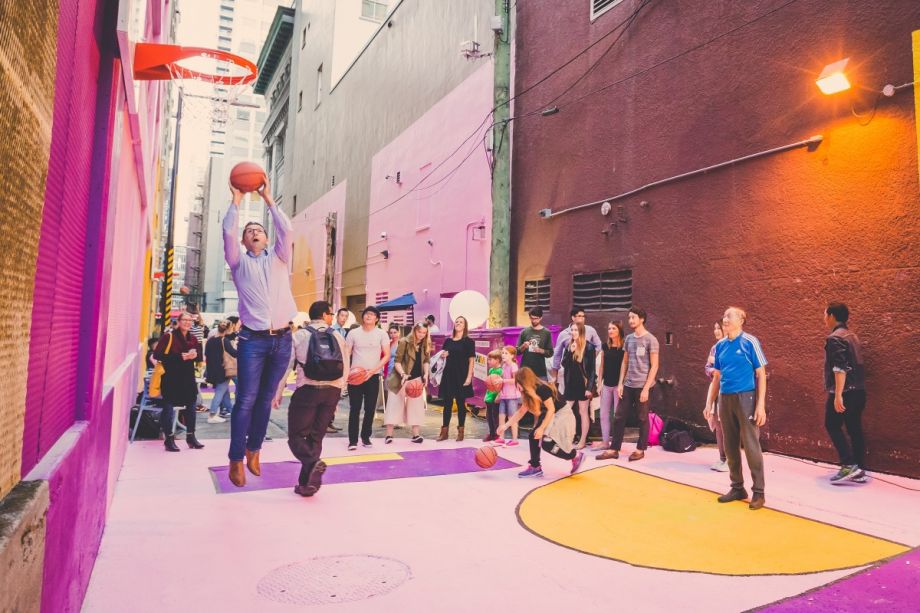 Over 200 of Vancouver’s downtown blocks are bisected by an alleyway, but only one of those alleys — or “laneways” as Vancouverites call them — has a foosball court. As of last week, the alley that runs behind West Hastings Street between Seymour and Granville has been reimagined as a gathering space, the first of three alleys in a $200,000 pilot project. Responding to a need for more and more diverse public spaces, the West Hastings alley has been newly painted in bright pinks and yellows, and in addition to foosball, now features a basketball hoop and cafe patio.

“Laneways serve an important business function, but for a big part of the day they are underused and full of potential,” said Charles Gauthier, president and CEO of the Downtown Vancouver Business Improvement Association (DVBIA), in a statement. “So we asked, if we make our lanes more appealing, could they become public spaces?”

DVBIA partnered with the city and HCMA Architecture and Design on the project, titled “More Awesome Now.” The alleys will remain accessible for service purposes, like the deliveries typically conducted in the morning and afternoons. No formal schedule of events is planned for the space, a press release notes, and property owners, tenants and visitors will be expected to share responsibility for cleaning and monitoring it.

“Boldly reimagining downtown laneways can bring vibrancy to underutilized spaces in the city year-round,” says Margaret Wittgens, the city’s director of Public Space and Street Use. Activating all of downtown’s 200 alley blocks would increase public pedestrian area by as much as 30 percent.

Gauthier told Metro News that the alley project is responding to a need identified by the Re-Imagine Downtown Vancouver 2040 collective visioning process. “People wanted more places where they can actually meet other people, play during the work day, enjoy the different types of public space we have,” he said.

Plans are in the works to bring the concept to the Granville Street and Alberni Street districts soon. The retail districts of Granville, Alberni and Hastings provided half the funding for the pilot, while the city contributed the rest.