Making Alleys a Place for Play (Not Old Couches) 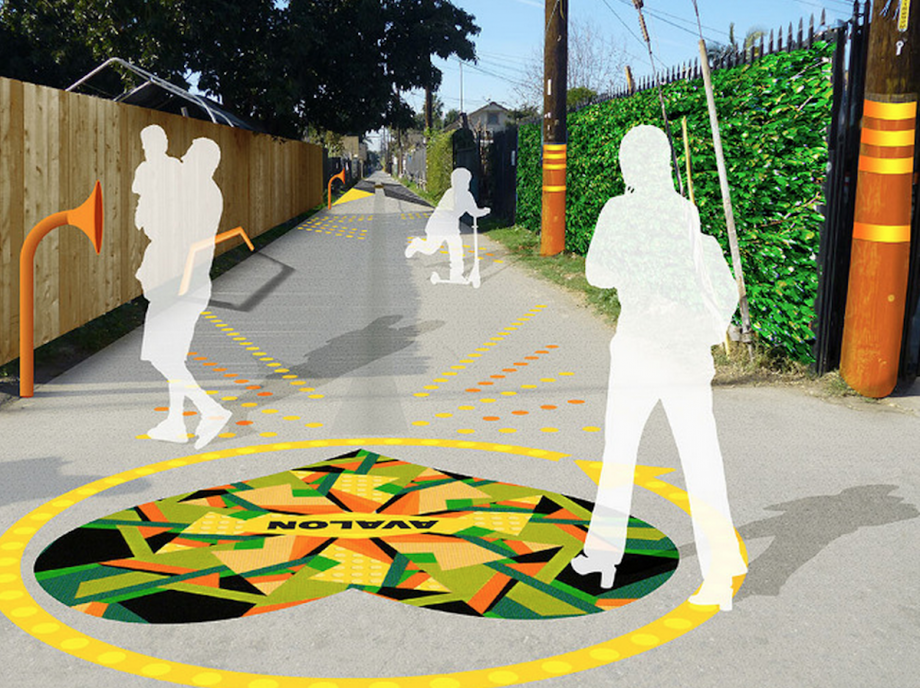 The residents of South Los Angeles were initially a bit skeptical about the idea of green alleys. “When we first started talking to community members, they were like, ‘No way,’” says Tori Kjer, a program director of the Trust for Public Land. After all, alleys are often seen as forbidding places in cities. “They’re traditionally very much overlooked spaces for people to put out that couch they don’t want or for weeds to grow,” says Kjer. It was hard for people to imagine them as inviting or useful.

But that’s what makes the idea so appealing, too — the prospect that a liability could be turned into an asset. The vision is to convert them into vibrant corridors crawling with greenery, and covered with environmentally friendly surfaces. They are intended to provide play space, biking and walking routes, and a variety of ecosystem services. After six years of research and community organizing, Kjer and her colleagues have won strong support from the community for their Avalon Green Alley Network Plan, and the renovation of two alleys is scheduled to begin early next year.

If the project is scaled up, it could have a substantial impact on the urban fabric: Los Angeles has a total of almost 900 miles of alleys, roughly the length of the coast of California. Proponents believe that on a citywide scale, green alleys could act as significant rainwater sponges, mitigate the heat island effect, and reduce vehicle use, as well as bring social and health benefits to nearby residents.

In 2010, Joshua Newell, now a professor at the University of Michigan’s School of Natural Resources and Environment, coauthored a paper on 300 randomly selected Los Angeles alleys. The study found, he said, that the alleys were “under-appreciated, under-utilized opportunities to expand green space where there’s a dearth.” Through the audit, he found that in the South region, 38 percent of alleys had significant litter, and 34 percent had a good deal of graffiti — although, on the whole, they were more innocuous than their reputation suggests.

As it happens, park-poor neighborhoods tend to be “alley-rich”; the study found that one community in South Los Angeles had 2,593 people per park acre. But it had an alley density almost eight times the city average, and converting those alleys into green spaces would reduce the park “pressure” to about 528 people per park acre. Of course, alleys, no matter how lovely, cannot substitute for a great neighborhood park. But upgrading them could help. “There’s potential for neighborhood connectivity, increasing walkability between destinations,” said Newell. “They can provide micro play spaces. I think there’s a lot of potential in alleys.”

In terms of capitalizing on ecosystem services, there is a lot of excitement but a shortage of data. So the Avalon project has enlisted scientists from UCLA and Arizona State University to monitor the performance of the first two renovated alleys, and to strategically choose candidates for future greening.

The ASU researchers have been measuring greenhouse gas emissions throughout the city in extremely fine-grained detail. The data will help them to identify promising opportunities. They might find, say, traffic-congested areas ripe for improving routes for walking to school, or places where light-colored surfaces could have a cooling effect on nearby buildings. As Kevin Gurney, one of the ASU scientists, puts it, “Given all the possible alleys we could do our work in, where are we going to get the most bang for our buck?”

Then, after more alleys are converted, the next step will be to measure, “Are we achieving what we planned to achieve?” says Gurney. “Lots of people have lots of lovely ideas to lower emissions. But a lot of people in the scientific community are a little nervous because we don’t see a lot of verification.”

The plans also call for simply making the alleys more pleasant places to be. They plan to plant espalier fruit trees — using a horticultural method that trains them to grow flat against the wall — and vines. With such welcoming details, the intended social and environmental benefits become inextricably entwined.

The idea of green alleys has gained currency in recent years: Chicago, Baltimore, Seattle and Vancouver have also instituted green alley programs. Some cities have incorporated recycled materials into their alleys; others are increasing tree and shrub plantings and providing local habitat for wildlife. But a 2012 paper, also coauthored by Newell, argued that “most alley greening programs are narrowly oriented toward stormwater management,” in part due to funding availability, and urged cities to take a more comprehensive approach. That is one objective of the Los Angeles project: to prove the concept for a network of green alleys that provides a suite of benefits in a strategic, evidence-based way.

And the underlying motive for all of the programs is the same: to turn blight into a boon. “Once they’re beautiful and improved and just more friendly to people, they’ll end up getting a lot more use,” says Kjer. “I think the transformation is going to be pretty amazing.”