This Design Rethinks the Space Beneath Train Tracks – Next City

This Design Rethinks the Space Beneath Train Tracks

People​ from New York to Toronto to Miami are looking at the space under freeways and elevated commuter train lines and seeing parks and public gathering spaces. The designers at MySpace Architects in India see business. Their vision for an entire mixed-use development beneath a Delhi metro line includes office and co-working space and night shelters stacked atop foot paths and cycle-tracks.

MySpace Architects is one of several winners recently announced in the Rethinking the Future Awards 2017. Their idea won in the category of “Transportation Terminal.” As yet, they’re just concepts, but they detail precisely how and why space is often squandered below elevated transit-ways, and spell out, down to percentage points, how they could become commercially viable.

The space’s main problem, of course, is that it’s more vertical than horizontal — though that’s essentially the problem with space in any city. MySpace Architects estimates that out of the “net volume of space available between the two pillars,” 60 percent of it could be converted into commercial spaces, ideally tailored to startups with small office needs or even government buildings. Those spaces could then be stacked atop bike and pedestrian throughways to help foster first mile/last mile connectivity. 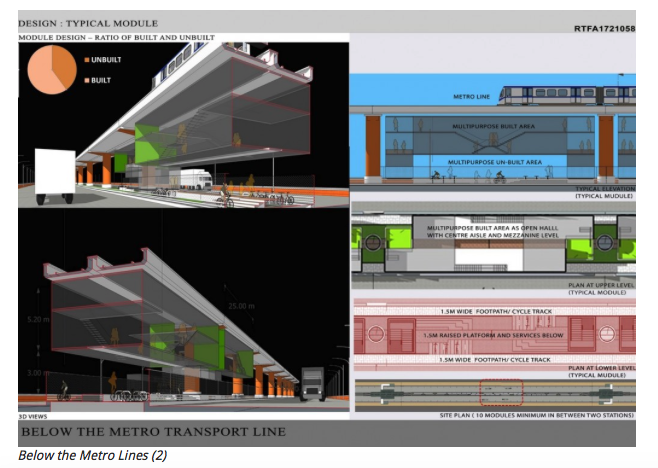 “Arrangement of space between the two metro pillars, is multiplied to form a continuous spine of functional spaces,” according to the architects. “The commuters can have the ease of coming down to their offices, directly from the metro stations.”

Rethinking the Future (RTF) was established in New Delhi, India, in 2012. This year’s contest saw over 500 entries, and judges selected 18 winners in a number of categories, including housing and landscape design.

“Each of these projects represents the best of architecture and design across the globe, where innovation and creativity are intersecting,” according to the RTF website.

Entrants who won considered everything from the energy consumption of skyscrapers to the ultimate nursery school design. Some plans draw from nature, looking to coral reefs, say, or soap bubbles, to imagine more efficient structures. For example, EYP Architecture & Engineering’s X/O Skeleton mimics coral to reduce energy consumption in high-rises by combining their “skin and structure in a single integrated system.” 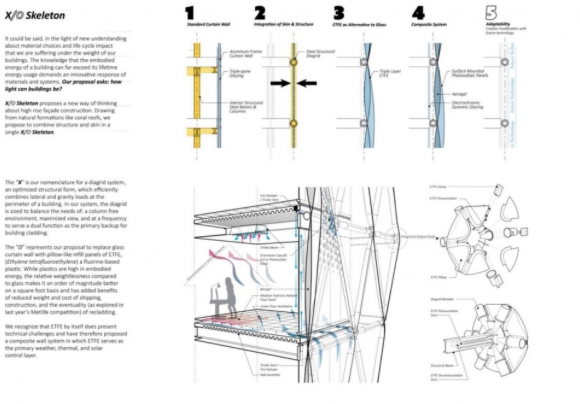