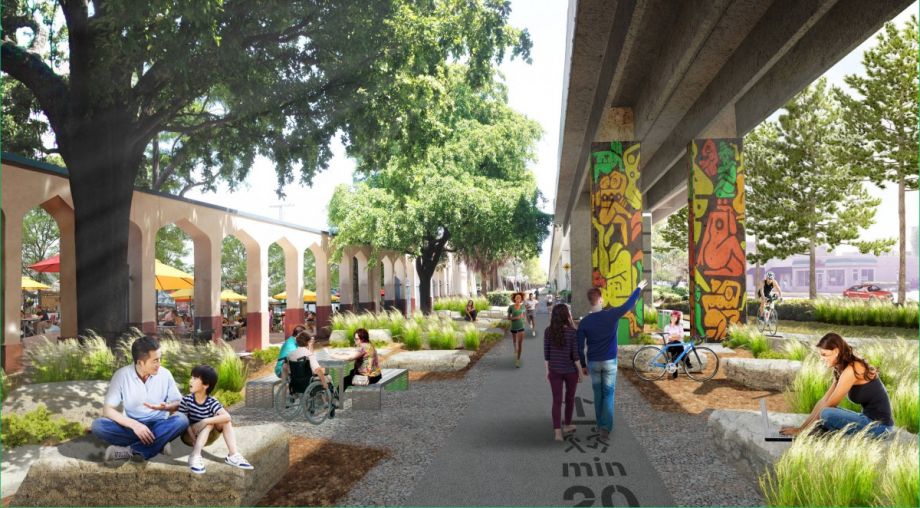 Coming sometime soon to Miami? The Underline, envisioned as a 10-mile-long, 110-acre linear park, could bring green space to a part of the city that lacks it, increase mobility options and connect the city’s booming financial district with South Miami and beyond.

Underline supporters announced last week that they’d secured $75,000 in private funding from three real estate developers, about 10 percent of what backers hope to bring in to begin construction on the first section. Targeted for ground level beneath the elevated tracks of Miami’s Metrorail, The Underline would be (much) wider than NYC’s High Line.

Meg Daly, leader of Friends of The Underline, says the first section, the Brickell Backyard, will likely break ground in early 2017 and be completed in two years. Around the same time, the group will break ground in front of the University of Miami, about four miles south; eventually, construction will fill in the gaps and extend as far south as the last stop on Miami’s metro, Dadeland South. Master-planned by James Corner Field Operations, the landscape architects of the High Line, the park will have two trails, one for cyclists and one for pedestrians, with destination parks — or as Daly calls them, “candy” — scattered along the route. Crossings will be improved to increase pedestrian safety and hopefully dispel Miami’s dubious honor of fourth most dangerous U.S. city for pedestrians.

Daly got the idea for the park after she broke both elbows in a cycling accident and couldn’t drive. Annoyed by having to get a ride to physical therapy, she started riding the metro and walking the rest of the way under the tracks.

Fast-forward a bit, and The Underline was born. It’s not just a ploy to create green space in a city starved for it (Miami has 3.5 acres of parkland per 1,000 residents, half the median amount for large U.S. cities, according to the Trust for Public Land), but also an idea to radically change how the city moves.

Daly decries the statistic that half of Miamians get fewer than 20 minutes of exercise a day. “I grew up here with a very active family,” she says. “To me, riding my bike — and not getting a ride from my mom — was freedom. That was the 1970s. Since then, our population has doubled, and so has our traffic. So by the time my kids came around, we lived half a mile from school and I didn’t let them ride their bike to school or walk. It took a generation for our mobility options to be reduced to one — the car.”

With a separated trail — even one that follows the route exactly of an existing transit option — Daly hopes more people will get on their bikes or on foot to run small errands.

So too does the city, the county and the state, which have collectively put $5 million behind the project so far.

Miami is seeing an uptick in millennials, and Daly says, they don’t want to drive. “This [park] is for a new generation that wants to have new ways to move,” she says.

And, Daly jokes, she has an ulterior motive. Her children, now 28 and 30, are millennials themselves, and both live in New York. “I’m building The Underline so my kids will come home,” she says.