University-Community Engagement Is a Two-Way Street – Next City

University-Community Engagement Is a Two-Way Street 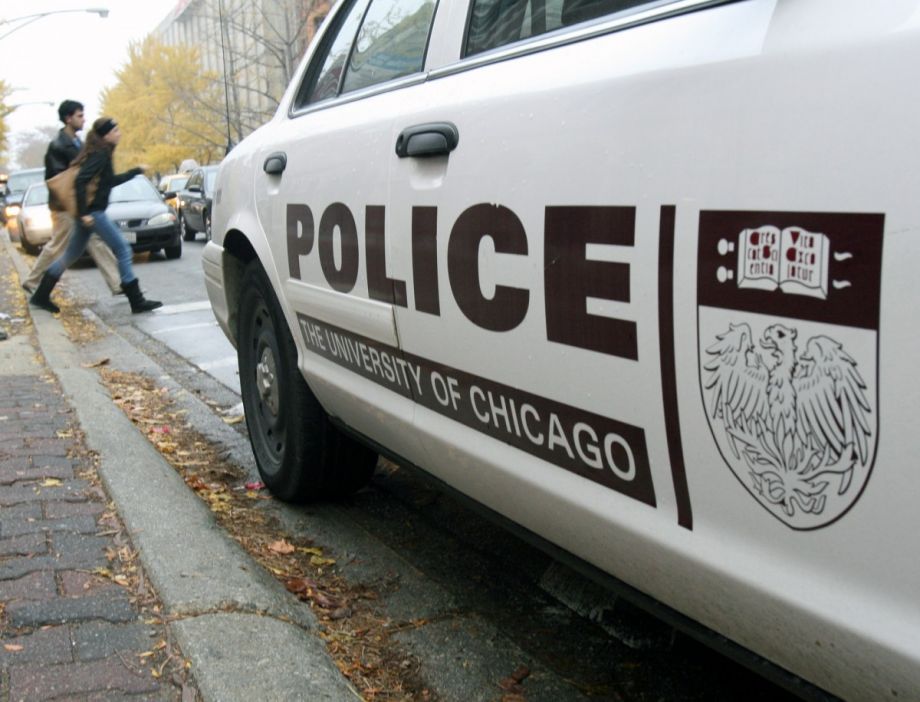 Not all neighborhoods around the University of Chicago want the same amount of engagement with campus police. (AP Photo/Stacie Freudenberg)

How can urban “anchor institutions” — colleges, universities, hospitals and other major institutions that are rooted in a specific place — strengthen their communities?

One parking lot at a time.

Midtown Detroit President Susan Mosey spent much of 2014 persuading her neighborhood’s major employers, Wayne State University, Henry Ford Health System and Detroit Medical Center, to give up one surface parking lot each for redevelopment in a neighborhood where eliminating surface parking is a major catalyst for community revitalization. The panelists at Next City’s City Sessions panel on “The University as Community” on Nov. 19th at Moore College of Art in Philadelphia had many other examples of little things that “eds and meds” and other large place-based non-profit institutions can do to hasten big change in their neighborhoods and cities. It could be something as small as offering space in an institutional building for a local bakery to set up a cafe, or shifting printing to a struggling local printer that allowed it to expand and modernize with a new $2 million printing plant (as happened in Detroit), or designing campus buildings so their main entrances open out onto city streets rather than in toward campus (a Chicago example).

Yet if these are the bricks with which universities, hospitals and other anchor institutions can build stronger communities, the mortar of institutional commitment to engagement with the community is every bit as important. That mortar also has to be mixed in the right way, in partnership with the community rather than acting independently.

During the event, several elements emerged as keys to successful community engagement. Here are some of the most important ones.

The engagement needs to be based on mutual interests.
Myla Skinner, director of strategy at the University of Chicago’s Office of Civic Engagement, noted that finding the common ground can be tricky when an institution is dealing with multiple adjacent neighborhoods whose residents may not all define their interests in the same way.

The university-community relationship needs to be collaborative, not transactional.
Lee Huang, senior vice president and principal at Econsult Solutions, said he thinks that some widely used tools for getting anchor institutions to invest in their communities — payments in lieu of taxes (PILOTs) and community benefit agreements (CBAs) — are actually admissions of failure to engage.

It’s difficult to turn such a mistrusting relationship around. Huang pointed to Boston and Pittsburgh as examples of cities where the adversarial, transactional relationship has poisoned university-community relations.

University-community engagement needs to be institutionalized.
Skinner noted that much of her university’s shift from an isolationist to an interventionist stance when it came to addressing issues in its surrounding neighborhoods took place when a president who was committed to community engagement took the helm. But this reliance on the vision of a leader can make it harder for community organizations to build lasting relationships. “We’d seen that our institutions wavered over the years in their commitment to the community,” Detroit’s Mosey said. “It depended on who was the CEO of the institution.” Working with U3 Advisors (headed by panel moderator Omar Blaik), Mosey’s organization came up with strategies to secure consistent engagement on the part of those institutions.

The key people who make community engagement work are in the middle.
The leader may articulate the vision, but if middle managers don’t then commit to hiring local talent on construction projects or seeking out local vendors for supplies, the engagement will be superficial and short-lived. Blaik summarized this point well: “Anchor institutions want to do the right thing, but they achieve impact not by what the president says but by what the heads of transportation and parking, facilities management and dining services say and do.”

Community groups can play a role in getting the middle engaged as well. Mosey noted that thanks to pressure applied by private funders and civic groups along the line, the group building Detroit’s M1 Rail streetcar got large national construction companies to structure their subcontracting so that small local companies and individuals could successfully compete for the work.

The community needs to find its voice too.
Mosey attributed her group’s success at revitalizing Midtown Detroit to persistence. “Institutions don’t wake up every day saying, ‘How am I going to make my neighborhood better?’ We prod them along,” she said. “We keep it professional, try to meet them halfway and work with them, but mostly we’re rebuilding the neighborhood by ourselves,” she said.

Andrew Frishkoff, of Philadelphia LISC, says his group has as one of its main goals helping communities find their voice and identify their priorities, along with building a bridge from residents in West Philadelphia to Drexel and Penn. Sometimes, he said, that can take surprising turns, as with what has become LISC’s Early Childhood Education Initiative.

“Education is not a core competency of LISC or of many community-based organizations,” he said, but when LISC was working with groups in Mantua and with Drexel President John Fry on neighborhood planning issues, “a bunch of light bulbs went on in our collective heads. We Are Mantua and Make Our Mark’s community plans,” which had improving education as a key goal, “synced with Fry’s thinking on how Drexel can be an active partner on community initiatives.

“It’s easier to have authentic engagement when you have actual partners in the community and engage with the parents and families there.”

The community engagement should also advance the institutional mission.
“We know this works in practice, but does it work in theory?” is an old academic joke, but it points to an opportunity to embed civic engagement throughout a university’s culture.

“On the one hand, you have all these people doing practitioner research in inclusive programs that do great things around the city, but they have no connection to institutional management,” Mosey said. “You don’t have the procurement people talking with the faculty member researching civic engagement.” Chicago has taken steps to tie the two together through initiatives such as an Innovation Center where local businesses and entrepreneurs can consult with university faculty engaged in research with applicability to their businesses, Skinner noted.

Huang pointed out that the most logical university-community tie revolves around education: “Public education is a ‘positive externality,’ that is, it has spillover benefits that extend beyond the direct beneficiary,” he said. “There’s a reason why there’s so much attention paid to public education, and universities can and should play a role in that.

“What’s in it for the universities? Their institutional mission is research, advancing knowledge and educating students,” he explained. “How better to do that than to apply it to the problem of our time, which is public education?”

“The University as Community” was the second of Next City’s City Sessions in Philadelphia, sponsored by the John S. and James L. Knight Foundation, and presented in partnership with 900AM-WURD and AL DÍA News. Register here for the final session, “Gentrification, Integration and Equity.”