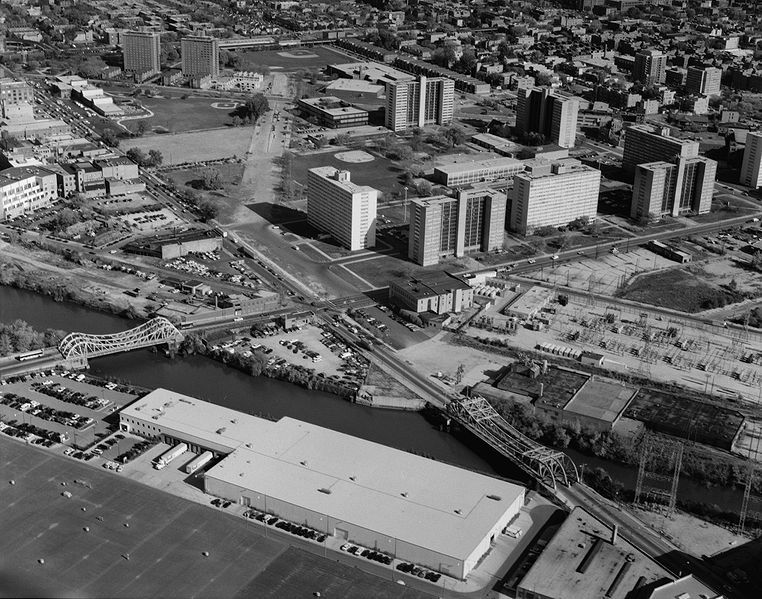 Day one of the forum culminated Thursday night with an opening reception and three presentations about inequality in housing design. I can’t help but feel these were scheduled for maximum guilt inducement, coming as they did right after conference attendees munched on hors d’oeuvres on the second floor of downtown Detroit’s sleek One Woodward Avenue office building.

The biggest name on this part of the program belonged to former Pittsburgh Mayor Tom Murphy, who opened his presentation with an anecdote about Horatio Nelson Jackson, the first man to drive across the U.S. in an effort to prove to naysayers that automobiles were more than a passing fad in 1903. Modern-day planners and designers, Murphy said, need to take just as many risks with the tools and technologies available now. He then launched into a list of Pittsburgh’s various successful brownfield projects and economic development schemes through the years.

But the two preceding talks, courtesy of architectural activist Roberta Feldman and research psychiatrist Mindy Fullilove, stuck out for the way they challenged voguish ideas about housing access.

Feldman focused on Cabrini-Green, the doomed high-rise public housing project in her hometown of Chicago. Most in the field are familiar with the story of Cabrini as well as Parkside of Old Town, the mixed-income development that popped up in the demolished complex’s footprint. Since the still-ongoing Parkside got a $50 million jumpstart thanks to a federal HOPE VI grant, the redevelopment had a public housing mandate. Feldman’s task was to help see that through.

According to Feldman, there actually had been a proposal to maintain some of the still-standing Cabrini complex, which would have cost the city $150,000 per unit as opposed to $350,000 in the new buildings. (It never made it up the ranks to earn city approval.) This, she argued, would have made it easier to assure affordable housing at Parkside, which as it stands today is 30 percent public housing with the rest priced at market rate, excepting a few affordable units here and there. She added that, had HOPE VI crafted policies with “democratic design” in mind — that is, the idea that good design and equity aren’t mutually exclusive — Parkside would have better served low-income Chicagoans and been cheaper to build.

“We can get equally strong high-quality design in the interest of public interest work,” Feldman said, summing up the notion of democratic design in a phrase.

Fullilove, author of the recent book Urban Alchemy, took aim at a strategy now under consideration in many Rust Belt cities such as Detroit: planned shrinkage. Originating across the state in Flint, Mich., planned shrinkage is the idea post-industrial cities still losing residents can manage growth by demolishing parts of the city with large amounts of vacant buildings, while focusing resources on stronger, denser neighborhoods like downtown cores.

The notion makes Fullilove “very frightened,” since it recalls for her a similar episode in New York City in the late 1970s and early ’80s. Responding to the nascent AIDS crisis as well as increasing violence and drug addiction, city officials went about knocking down dilapidated housing in parts of Brooklyn, the Bronx and the Lower East Side. Altogether, these neighborhoods accounted for 75 percent of the upstate prison population. The idea was that wholesale demolition and relocation would quell the aforementioned social ills by placing poor residents in clean, new housing.

As if all it took to get young men out of the drug game are better floors, right? As it turns out, the demolitions only spread violence, addiction and incidences of AIDS to adjacent neighborhoods. Fullilove pointed to a part of the Bronx known as the “poverty spine,” where much of the problem had been concentrated. After the demolitions, whatever social fabric the neighborhood had left had been blown apart, and a greater swath of the Bronx fell prey to the unpleasant markers of Reagan-era urban America. Some parts of the borough had, she said, rates of AIDS comparable to those of central Africa at the time.

Fullilove called it “a complete failure of the normal epidemic response,” and used it as a word of warning to advocates of planned shrinkage: Taking the wrecking ball to bad housing doesn’t immediately solve the problems contained therein.