Turning Down the Widening Gyre of Plastic Micropollutants – Next City

Turning Down the Widening Gyre of Plastic Micropollutants 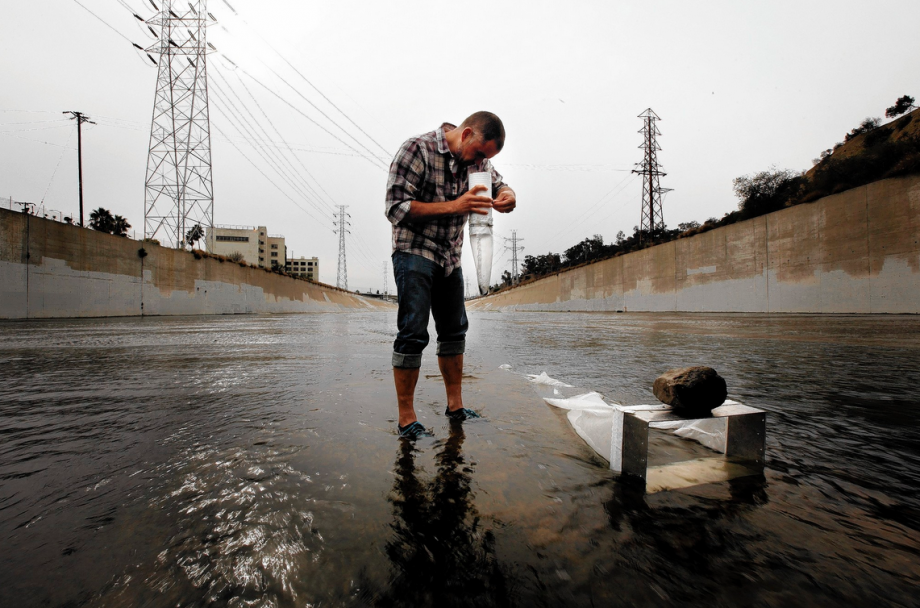 It’s one of the most memorable scenes in cinematic history. The aimless young hero of the 1967 film The Graduate, played by Dustin Hoffman, is cornered at a pool party by a somewhat creepy older businessman.

“I just want to say one word to you. Just one word,” the older man says, putting his arm around Hoffman’s shoulders.

“Yes I am,” says the hapless Hoffman.

“Exactly how do you mean?”

Plastics. What a future it has turned out to be. Plastics carry our groceries and wrap our food and comb our hair. They correct our vision and deliver our medicine. They are integral to our cars, furniture, airplanes and buildings. Plastics are everywhere, and businesspeople like that character from nearly a half century ago are always looking for the next way to insert plastic into something you can sell.

One idea that someone came up with a few years back was to use minute plastic beads in personal care products like face washes and toothpastes, to add some extra grit to the scrubbing action. As a result, millions of tiny particles of plastic have been washed through municipal water systems into the lakes and rivers of the U.S.

Look on the shores of the Great Lakes, or in the Los Angeles River, for instance, and you will find them: Tiny microbeads, as they’re called. The beads come hundreds of thousands to a single tube of exfoliating body wash or super-cleansing toothpaste. They are too tiny to be caught by the filtration systems of water treatment plants. Now they are turning up everywhere, to the alarm of environmentalists who say they could have significant effects on ecosystems.

This week, legislators in two of the nation’s most populous states, New York and California, announced the introduction of bills that would ban the sale of products containing microbeads.

The move is a big step forward for environmental advocacy group 5 Gyres, which takes its name from five areas in the world’s oceans where plastic debris swirls in concentrated clumps. The group, which is dedicated to the ideal of a future without plastic pollution in oceans, has been raising awareness of the tiny beads and the dangers they cause.

The minuscule beads can attract toxins and then get eaten by small fish, moving into the food chain. Researchers in the Great Lakes have found that the microbeads have become frighteningly pervasive, contributing to a miasma of plastic that can reach up to 1 million particles per square mile in some areas of Lake Erie, for instance.

Non-plastic alternatives for exfoliation used by other companies include salts and walnut shells. Some of the large cosmetic manufacturers, such as Johnson & Johnson and Procter & Gamble, have pledged to phase out microbeads over the next few years.

But a 5 Gyres spokesperson told the New York Times that dealing with individual companies was “akin to playing Whack-a-Mole” and that his group was pushing for more legislative bans. “We’re not looking at a one-state strategy,” said Stiv J. Wilson, policy director at 5 Gyres. “This is the alpha, not the omega.”

In a short film produced by the Los Angeles Times, Markus Eriksen, a scientist with 5 Gyres, dips a net into the L.A. River. He demonstrates how it picks up dozens of little pieces of plastic in just a few minutes. And he has his own choice words about what he wants the next 50 years of plastics to look like: “To design a future where if you can’t recover it, then you don’t use plastics in the first place.”