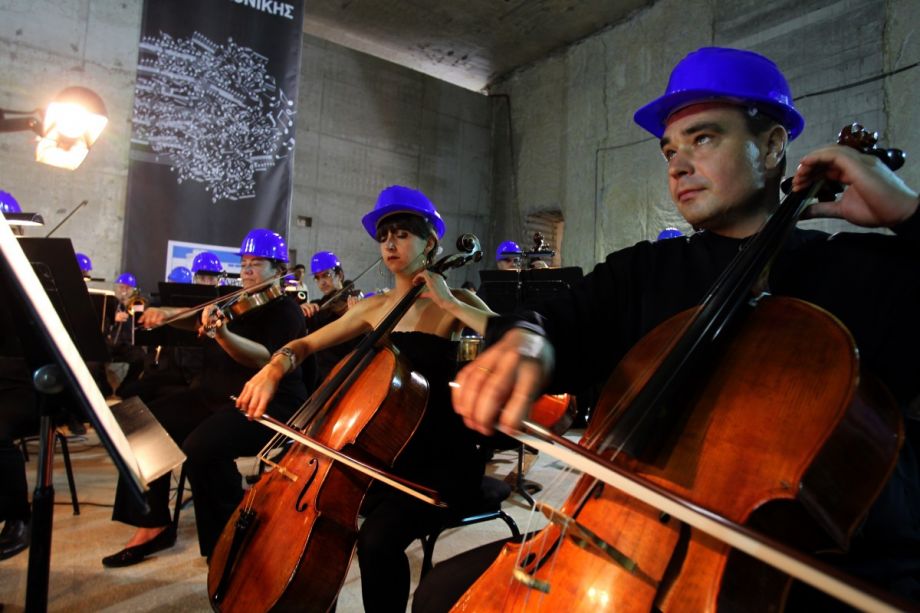 Greece’s second city and the capital of Greece’s Macedonia region, Thessaloniki is considered by some to be the country’s cultural capital thanks to its vibrant street life and active calendar of arts events. Global Rail News reports this week that the company that built and runs Greece’s first metro has reached a major milestone on the road to completing its second.

Attiko Metro announced that with the arrival of the tunnel boring machine “Frixos” at 25is Martiou station on the Kalamaria extension’s second tube July 31, all of the tunneling work for the Thessaloniki Metro has been completed. Work remains to be done on fitting out the tunnels with tracks, electrical and signal systems, and the stations themselves still need to be completed. Attiko Metro says that civil works are 80 percent complete on the Base Line and 60 percent complete on the Kalamaria extension.

“The connection of the tunnels at the Kalamaria extension line with the Base line of Thessaloniki Metro coincides with the completion of the most difficult in technical terms, due to geological difficulties, the most time-consuming and the most expensive part of a metro project, which is the boring of underground tunnels,” Attiko Metro Chair Yannis Myopolous told GRN.

“I would like to express my sincere thanks to all Attiko Metro employees and to the personnel of the contracting company Aktor for the great joint effort we have all made during the last two and a half years to revive a major project and make a dream come true for the city of Thessaloniki.”

Proposals to build a metro in Thessaloniki stretch back to the early 1920s, when the city was being not just rebuilt but redesigned after an unattended kitchen fire spread, Chicago 1871-style, and wiped out the city center in 1917. An earlier attempt to build a metro in the city faltered in the 1980s for lack of funds; work on the current lines began in 2006. Archaeological discoveries along the route have delayed progress on several occasions. The two lines being built as part of the initial work will total 9.6 km (6 miles) in length and have 13 stations between them. Total cost for the project now stands at €1.1 billion (US$1.28 billion). Service is slated to start on the Base Line in 2020 and on the Kalamaria extension the following year.

Bogota Gets Bidders Ready to Bid on First Metro Line

The loans from the Inter-American Development Bank, the World Bank Group’s International Bank for Reconstruction and Development and the European Investment Bank will provide a total of $1.68 billion towards the project’s total cost. The initial installment of $196 million - $70 million each from the IADB and IBRD and $56 million from the EIB - should cover project costs through 2020. The total cost of the 15-station elevated line is projected to be $4.4 billion, $2.6 billion of which is to come from Metro Bogotá.

Interested bidders must submit applications to prequalify by the end of 2018; Metro Bogotá expects to award a design-finance-build-operate-maintain-transfer contract for in August 2019. The winning contractor will be expected to kick in $1.1 billion towards the project, an amount that will be recouped over the first 20 years of operations. The line should enter service in 2024.

Indian government officials and foreign dignitaries officially cut the ribbon to open the latest extension of the Delhi Metro Pink Line to enter service Aug. 6, according to a report in the International Railway Journal.

The 8.1-km (5-mile), 5-station extension from Durgabai Deshmukh South Campus to Lajpat Nagar brings the total length of the Pink Line to 29.6 km (18.4 miles). The new stations include interchange stations with the Yellow Line at INA and the Violet Line at Lajpat Nagar. The initial 21.6-km (13.4-mile) segment from Majlis Park to Durgabhai Deshmukh South Campus opened on March 16. Two more extensions are set to open within the next year: the 13.4-km (8.3-mile) outer segment from Trilokpuri to Shiv Vihar is slated to open late in August, and the 15-km (9.3-mile) connecting segment between Lajpat Nagar and Trilokpuri should open in September.

This current extension brings the total extent of Delhi’s metro system to 296 km (183.9 miles) and the total station count to 214.

Swedes Get Into Swim When Storm Floods Train Station

“Into each life, some rain must fall.” When enough rain fell to flood an underground train station concourse in the Swedish city of Uppsala, however, some fun-loving Swedish commuters decided to get into the swim of things.

A YouTube video posted on the Global Rail News site shows several Uppsalans, decked out with floats, flippers, umbrellas and squirt guns, having a blast as they float and wade through the temporary swimming pool in the Uppsala Central station concourse. Some confusion over responsibility kept the pool filled for a while, according to local news reports, but the concourse was eventually drained and returned to its normal use. While no one can vouch for the cleanliness of the water they swam in, it appears no one came down with any maladies from their frolic in the flood.

Know of a project that should be featured in this column? Send a Tweet with links to @MarketStEl using the heshtag #newstarts.