Investment in Affordable Housing Has Ripple Effect – Next City 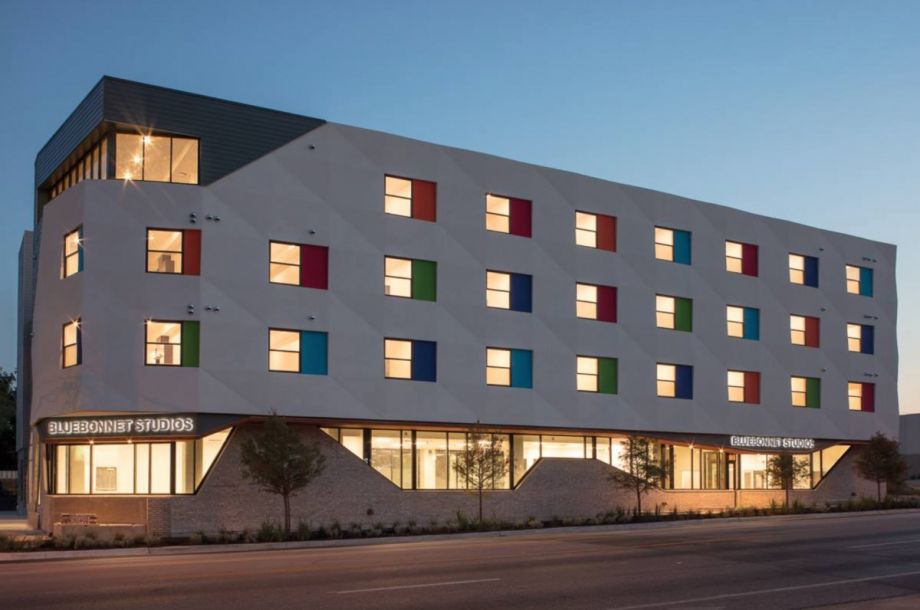 When Bluebonnet Studios opened in Austin last month, all 107 apartments filled quickly. There’s already a waitlist of over 900 low-income Austinites hoping for a spot in the rent-restricted development.

The story is similar for all 19 affordable housing buildings in the Austin portfolio of nonprofit Foundation Communities, which developed Bluebonnet. There simply aren’t enough units to meet demand. Alyah Khan, the organization’s communications coordinator, says its waitlists are, “the longest they’ve ever been for us. It’s hard to keep up with the need.”

Keeping up with that need could get even harder in Austin and other U.S. cities where affordable rentals are in short supply if President Donald Trump slashes critical funding. Last week, The Washington Post reported that early drafts of Trump’s federal budget show over $6 billion in cuts to the Department of Housing and Urban Development’s budget. (HUD’s fiscal year 2016 budget was $47 billion.) If implemented, the changes would eliminate the Community Development Block Grant (CDBG) program, shrink the voucher program that provides rental assistance to the poor, reduce housing programs for elderly people and people with disabilities, and much more.

Austin’s Foundation Communities doesn’t rely heavily on HUD grants to fund housing construction. CDBG paid for just $1.15 million of another recent, $22 million development they built. But Khan says they would certainly feel the pinch and that they, “need continued support from the federal government.”

The potential HUD budget slash comes at a time when the federal government has already reduced housing funding and the need for affordable housing is growing. According to the National Low Income Housing Coalition’s (NLIHC) recently released report, “The Gap: A Shortage of Affordable Homes,” the U.S. would need 7.4 million more affordable rental homes and apartments to house everyone living at or below the poverty line.

“It means all those people are spending more on housing [than they can afford]. It puts them one crisis away from eviction,” says Sarah Mickelson, NLIHC director of public policy.

NLIHC says the solution is increasing federal funding for affordable housing. But funding has already trended downward in recent years, in part thanks to inflation. As market-rate rents go up in a city, Mickelson explains, so too does the cost to keep people in income-restricted affordable housing.

The Budget Control Act of 2011 lowered federal spending caps, including those for affordable housing and community development funding. There have been temporary spending increases, but many HUD programs are still underfunded compared to pre-Budget Control Act spending. For example, the CDBG program is down $1.4 billion from 2010 spending adjusted for inflation. HOME, which provides affordable housing support, is down $1 billion.

“Congress hasn’t really provided enough funding to get above pure inflationary cost,” Mickelson says. “In the meantime, as rental costs have gone up other programs have gotten cuts to make up for inflation including HUD’s HOME program, CDBG, public housing and other resources.”

Given that, it’s unsurprising that a deeper cut to HUD funding would have a tremendous impact on affordable housing. NLIHC estimates that if the rumored budget is enacted, 200,000 housing vouchers would be lost, and the U.S. would lose about 10,000 housing units for seniors and another 6,800 units for people with disabilities.

“It would have a devastating impact on HUD programs and the millions of people that they serve,” says Mickelson.

The budget cuts would ripple beyond the loss of affordable housing. In another report, “A Place to Call Home,” released last week, NLIHC looks at how federal affordable housing spending positively affects education and health outcomes, local economies and more.

According to the report, building 100 affordable rental homes results in $11.7 million in local income generation, $2.2 million in taxes and other revenue for local governments, and 161 local jobs in the first year. NLIHC also estimates that HUD investments in 2015 directly supported 301,217 jobs and indirectly supported an additional 236,080 jobs.

In an email to his staff, new HUD Secretary Ben Carson tried to assuage fears about potential cuts, writing, “please take some comfort in knowing that starting numbers are rarely final numbers. Rest assured, we are working hard to support those programs that help so many Americans, focus on our core mission and ensure that every tax dollar is spent wisely and effectively.”

Trump’s budget proposal is slated to be released later this week. Congress will then take up the issue in its monthslong budget process.

At the same time, Congress will be considering a bipartisan bill to increase another federal housing program. Senators Maria Cantwell and Orrin Hatch introduced a bill last week to double the size of the Low-Income Housing Tax Credit (LIHTC) program and streamline some pieces of it.

Cantwell and Hatch’s bill would increase the allocation of credits by 50 percent. The allocation hasn’t increased since 2004. Mickelson hopes to see the bill pass.

“Expanding LIHTC is a really important first step,” she says. “But we would urge Congress to remember it can’t just be an expansion of tax credits. We really need an expansion of HUD programs.”