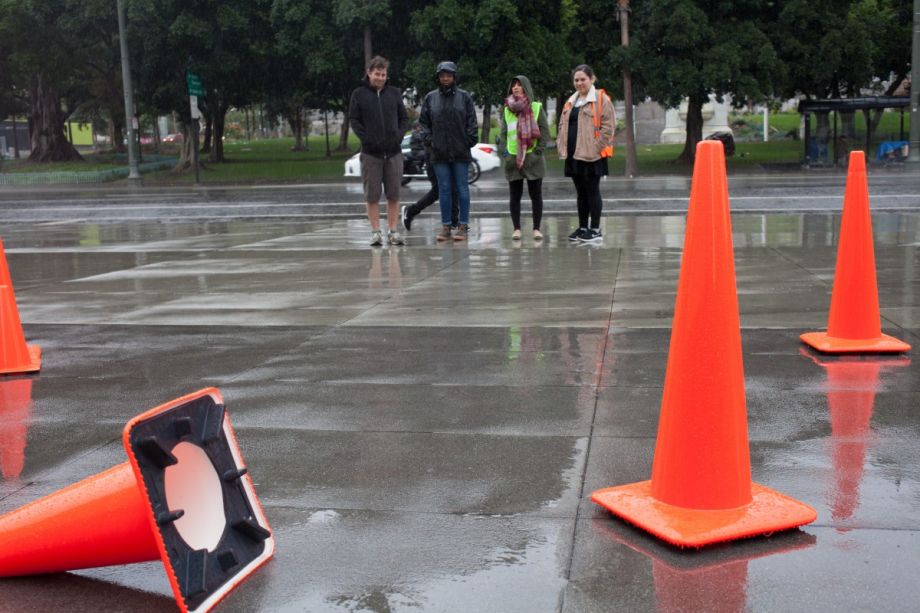 On the third Sunday of November, people in cities across the globe honored the World Day of Remembrance for Road Traffic Victims.

In Portland, the group Oregon and SW Washington Families for Safe Streets made a public display of 400 pairs of shoes, echoing the number of traffic fatalities statewide this year. In Los Angeles, over 30 artists staged performances and installed art pieces in the public right-of-way. Nonprofit Walk SF and the San Francisco’s Vision Zero Coalition organized a memorial walk, ceremony and vigil.

All of these events shared two intertwined goals: to provide a space for collective mourning and public grief, and to push for policy changes that would make safer streets for all. Portland, San Francisco and Los Angeles all have an agenda to eliminate traffic deaths completely (known as a Vision Zero plan). And they all have a lot of work to do. Organizers of the November day hope that by making their loss public, people will be pushed to think about this threat — one that could change or end any life at any time — and the urgency of a need for solutions. According to nonprofit Streets Are for Everyone, more than 1.25 million people lost their lives in traffic globally last year; 35,092 people just in the U.S. in 2015.

Julie Mitchell participated in the remembrance last month for the first time as a founder of the new San Francisco Bay Area (SFBA) Families for Safe Streets. Her son was struck and killed riding his bike to work in the city in 2013. “Ever since then I knew I wanted to do something but I wasn’t sure what,” she says. With the support of Walk SF, she has organized other family members who lost loved ones and people who have themselves been injured in traffic collisions.

Their common bond is the driving force behind their pushes for policy change. Right now, the group is urging San Francisco to adopt automated speed enforcement cameras, which have proven to reduce speeding in New York. SFBA Families for Safe Streets is pushing California to adopt Vision Zero at a state level. Ultimately, Mitchell also wants the group to focus on accountability. Drivers often face no legal repercussions for striking cyclists and pedestrians. “What incentive do people have to drive carefully when they know they can get away with murder?” she asks.

The World Day of Remembrance, which goes back two decades and has seen increased participation in recent years, is about channeling that rage and mourning, making it visible. For people who haven’t been closely touched by such a sudden loss, the vigil, march and press conferences are meant as a wake-up call of sorts.

“I don’t know how else to make an impact on somebody that has never gone through this kind of tragedy before than to publicly show them what we have had to deal with,” says Mitchell. “And it can happen to anybody. We need to make the streets safer or it could happen to one of their family members.”

In Los Angeles, organizers tied the event to a coming street design change, and invited artists to try to convey loss in their own ways. Between 30 and 40 artists staged performances or set up installations along Main Street and Spring Street, which is slated to get a separated bike lane in the coming year. The event borrowed the model of LA Road Concerts, a concept developed by artist Stephen Van Dyke, in which artists design site-specific performances or artworks for a single stretch of road like Sunset Boulevard or Mulholland Drive.

Perhaps the most arresting contribution was from Michael Rippens, who jaywalked back and forth across the street, dunking his shoes in baby powder each time he reached the sidewalk. Dressed all in white (white shoes are a symbol of World Day of Remembrance), his steps painted a thickening white line across the road. Except it rained off and on all day. “When it rained it would wash the whole thing off and he would have to start all over again,” says Alan Nakagawa, artist-in-residence at Los Angeles Department of Transportation and creative catalyst for the day’s actions. “The process was very ephemeral and lyrical and poetic, even though it’s simple.”

Nakagawa has himself lost friends in traffic collisions, and he says these gatherings can be so affecting because nearly everyone can relate. “Unfortunately, everyone has a story. If not someone in their family or immediate, someone whose friend who has a friend who got killed or injured,” he says. For him, the memories of friends lost ebb and flow, like the white footprints across Spring Street. “I guess that’s the true definition of haunting, isn’t it?” he says.

That’s the power of events like these, or of the white ghost bikes that signify places where cyclists have been killed: They haunt. Mitchell and her family installed a bike where her son was struck, and her husband used to sit across the street and watch people react to it. “It does make a difference. It’s kind of a raw reminder to people passing by,” says Mitchell. But the city removed the bike within a month. There’s now a one-year moratorium during which the city has agreed not to remove the bicycles until a long-term plan can be developed. Mitchell has another bike waiting, one from a friend of her son’s, that she’ll install when she knows it will be able to remain.

Editor’s Note: This article has been changed to include a clarification about the intent of Pauline Gloss’ performance that was supplied to Next City after publication by Alan Nakagawa.