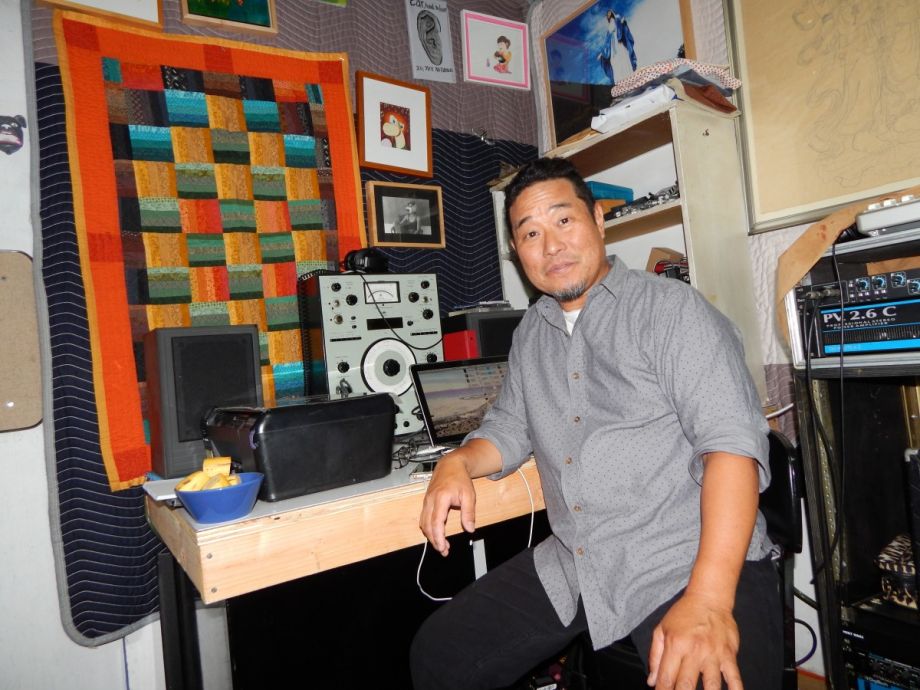 In pursuing zero traffic deaths in the city by 2025, Los Angeles Department of Transportation General Manager Seleta Reynolds says she’s open to everything. “I need to exhaust every single tool in the tool box and then a bunch of other tools people don’t even think belong in the tool box,” she says. Enter Alan Nakagawa, oral historian, muralist and the first artist-in-residence at LADOT. A lifelong Angeleno, Nakagawa will spend at least a year embedded in the department, making art and recommending ways other artists can be enlisted in helping the city reach Vision Zero.

The 52-year-old has experience in mural arts focused on social issues, music and oral history. Starting in the ’90s, he coordinated public art for Metro, L.A. County’s main transit planner and operator. There, he says, he advocated for artists. “In the hubbub of bureaucracy and public art, the artist is often the least paid and the most needed,” he says.

As the first artist in the new Creative Catalyst residency program — which is being co-administered by the Department of Cultural Affairs — Nakagawa will be paid $20,000 for the first year. He says it’s only intended to be a part-time position, but already he’s buzzing with projects. First, to understand what LADOT does and how artists might be better integrated into every aspect of its operations — from communication to street design to public art — he’s recording oral histories of agency staff past and present.

“Having worked for several decades at Metro, I couldn’t tell you that I completely understand Metro,” he says. Knowing that his residency would only be a year (two if the department receives the federal funding it’s applied for), Nakagawa decided this was the most expedient and interesting way to learn as much as he could. Reynolds calls the oral history approach a “really brilliant” way to pay respect to the department, while also acclimating staff to the idea of working in concert with artists. Nakagawa hopes to talk to 60 people before the year is up, and to share the audio in an online archive. He’s already begun to edit them into short podcasts.

“If I could compare myself from six weeks ago to now, it’s a quantum leap of how much information I have now on LADOT,” says Nakagawa, who has now completed 10 interviews. “When you say Department of Transportation, I kind of assumed that it had always been there, like it had been part of the city’s structure from very early, early on. But in fact, the DOT that we have today didn’t really get going until about ‘76.”

The time period was pivotal: 1976 was the bicentennial. L.A.’s first black mayor, Tom Bradley, had been elected three years earlier. Proposition 13, which restricted property taxation, passed two years later, leading to the defunding of parks and libraries, and ultimately contributing to the rise of hip-hop in the city as young people had nowhere to go. In the midst of all this, Bradley consolidated all of the departments dealing with cars and transit into one: the new LADOT.

Then in 1980, the city won its bid for the 1984 Olympics. Not wanting visitors to spend the entire event stuck in gridlock, the department went to work synchronizing the downtown traffic signals. Nakagawa has interviewed the man who designed the original software for that system, Sean Skehan. There were no computers at the LADOT at the time, so he developed it on an IBM computer in his garage. That system “really put LADOT on the map,” says Nakagawa.

He’s also interviewed Martha Stephenson, one of the first female engineers to work at the department. In the early days, the DOT was staffed almost entirely by engineers, many of them graduates of the regional public universities. Stephenson was the first woman at Cal Poly Pomona to complete the coursework in civic engineering, and only the second woman to graduate with the degree. She said she was treated well at LADOT, but that other women were discouraged from trying to advance their careers.

Shifting away from an engineer-led, male-dominant department is just one of the major cultural changes the LADOT has experienced in its tenure. In Stephenson’s early days, “Our objective as set by the council was to improve traffic flow to the greatest extent possible,” she says. With the oral histories, Nakagawa is also documenting a change in how the agency thinks about its role. Early on “there were all of these engineers who were completely car oriented,” he says. “Now the new generation is thinking well maybe pedestrians should be first. Maybe it’s OK that cars go a little slower so we kill less people and less people get injured. It’s a completely new paradigm that they’re working out of.”

Which brings us back to Vision Zero. Nakagawa has been tagging along on Vision Zero task force meetings, and listening in as staff conduct focus groups around areas with high concentrations of pedestrian and cyclist injuries and fatalities. Noticing that the presentations tended to focus on the numbers over the personal stories of those killed, he’s invited Gary Buchler of The Moth to lead the engineers in a storytelling workshop.

Talking to Nakagawa, one gets the sense he never runs out of ideas. He’s thinking about working with poets to install haikus on the backs of street signs with the goal of empowering pedestrians. “Most don’t really know what their rights are, but they’re the most vulnerable, so in a sense they should have more rights than anybody,” he says. He’s been posting his thoughts and observations to the Vision Zero Los Angeles Facebook page, including peeks inside LADOT’s headquarters. Located in an iconic building and full of artifacts from the city’s transit history — including the original signal timing hardware — it’s a public building the public rarely gets to visit.

And he’s hoping to find a way to collaborate with the people who put up ghost bikes in the city, a challenge given the clandestine nature of their work. Reynolds, too, wants to find ways to publicly honor those who have lost their lives due to traffic collisions, in a way that will get others to stop and think. The city has set a goal of a 20 percent reduction in traffic fatalities by 2017, but Reynolds says, “we’re actually going in the opposite direction.” With gas prices low and driving up, there have been more deaths to date this year than last. Nakagawa’s observations and recommendations will be integral to the Vision Zero action plan the department plans to publish in September, says Reynolds.