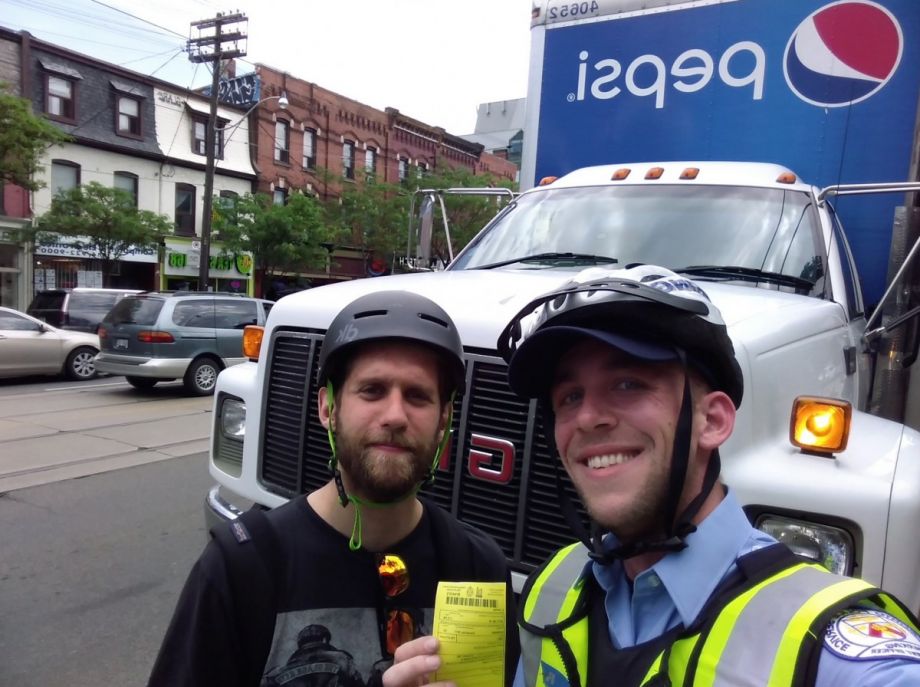 If you’ve ridden a bike in a city, you have almost certainly experienced a bike lane blocked by a car, SUV, delivery truck or taxi. At best, it’s inconvenient. At worst, it is dangerous, forcing a quick merge into car lanes. Whether it’s because drivers don’t understand what they’re doing or don’t care, it’s a widespread problem from Philadelphia to Seattle, Melbourne to Cardiff, Wales.

Though it’s illegal, there’s rarely any consequence for drivers who block a bike lane. It’s seemingly a low priority for parking enforcement officers. Plus, because freight deliveries and passenger pickups are relatively quick, it is harder to catch offenders in action.

As of June 1, Toronto’s Parking Enforcement Unit is a rare exception to the rule. For the past month, they’ve been experimenting with a “bike lane blitz,” dedicating a full-time enforcement officer to the problem. Kyle Ashley spends half his day bicycling around Toronto doling out $150 tickets to bike lane blockers and much of the rest of the day doing outreach and education about the problem through social media and in person.

Ashley has long been an avid cyclist and has been with the parking enforcement unit for nearly four years. “I knew what it felt like from both a personal and professional capacity, what it felt like to bike the streets of Toronto,” he says.

The idea for the blitz grew out of social media training Ashley had in May. Before then he’d never used Twitter. His instructor told him to find his online community and voice. Ashley started exploring Toronto bike Twitter and saw lots of people posting photos of cars and trucks blocking bike lanes and hearing that, “the community felt like they were being ignored.”

On patrol, Ashley tickets every bike lane blocker he finds. There’s no shortage of offenders.

For my #BikeTO friends who requested my presence on Shuter for #BikeLaneBlitz - I issued 6 tickets for 150$ in your lane…in under 2 min. pic.twitter.com/yhPWcFncSb

“I see a flagrant disregard for public safety,” Ashley says. “We really need to shift the mindset in cities. For example, I gave a truck on the north side of the street a $150 ticket for blocking the bike lane. I loop around the block and now he’s on the south side. Another $150 ticket. People don’t care.”

Ashley has a special focus on the corporate driver offenders that, “abuse bike lane infrastructure for profit,” citing Pepsi, Coca-Cola and Canada Post. In addition to writing a ticket, he uses Twitter to post photos of the delivery trucks and tags the companies.

Hey @PepsiCanada … Should we all switch to coke? You inconvenienced my new friend on college… pic.twitter.com/wrRCHsoKFT

Sometimes the public shaming gets a response. Though it’s fairly non-committal, Pepsi Canada said publicly that it would investigate the issue of bike lane blocking.

Ashley also uses social media to engage with the Toronto bike community, take suggestions of where he should focus his patrols, and do general bike safety outreach and education. “Twitter’s been an excellent tool for getting the community’s voice heard,” he says.

He thinks the blitz is making an impact.

“Bike lane specific enforcement is making a difference and we’re noticing it on a daily basis,” he says. “But we’ve noticed any time we do a blitz, the behavior changes temporarily. Afterwards, behavior goes back.”

Time will tell how effective this latest blitz is.

“I think it’s elevated the issue and raised awareness about the problem,” says Jared Kolb, Cycle Toronto executive director, “but it’s too soon to say if rates of bike lane blocking are coming down.”

Kolb told The Star that, ultimately, the solution for cyclist safety is more high-quality protected bike infrastructure in the city. Ashley agrees. He’s found drivers are more likely to park in paint-only bike lanes than the bollard-protected lane on Bloor Street.

The bike lane blitz is scheduled to end on July 7, and then Ashley will no longer be focused only on bike lane enforcement. But, he says, there have been discussions about how to continue some version of his focus on bike lanes moving forward. Details have yet to be finalized, but he says his bosses are talking about potentially getting more officers trained on social media and focusing more resources on bike lane enforcement.

“I definitely hope I stick around in this capacity,” Ashley says.