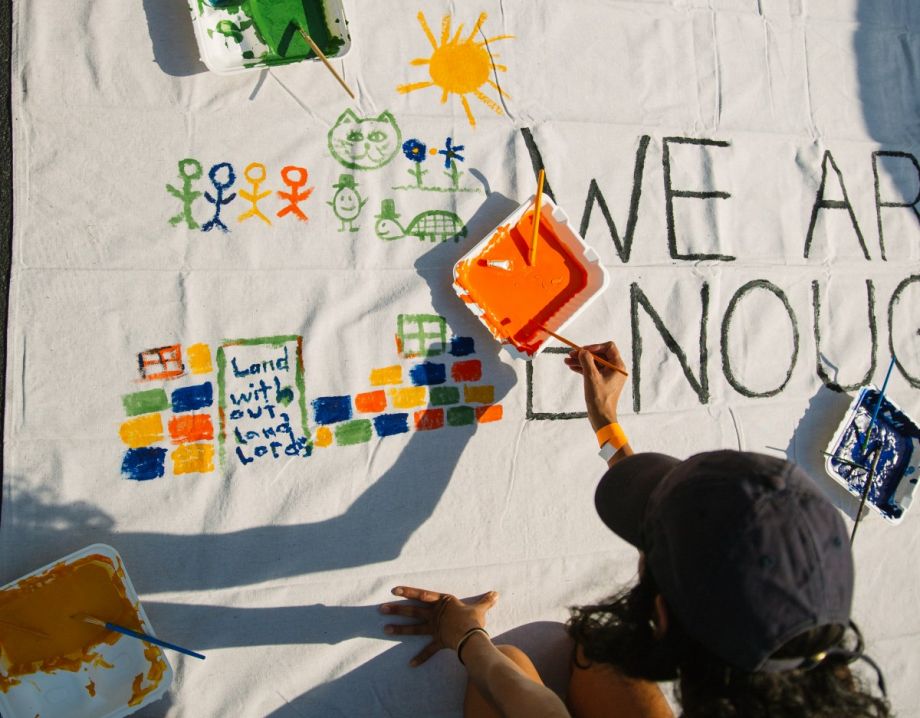 “If you could explain to an eight-year-old why homelessness exists, what would you say?”

That’s the question that Tia Katrina Taruc-Myers, director of legal education for the Sustainable Economies Law Center, asks all her interviewees before they become legal apprentices.

The best answers, she says, get to the root of the problem: homelessness exists because real estate systems prioritize profit. Until those systems are changed, all attempts to address the problem are just stop-gap solutions.

“We can’t just help more people buy homes, or get homeless people into services — it can’t just stop there,” Taruc-Myers explains. “We have to create systems and structures where people are allowed to, and incentivized to, take care of each other.”

One key feature of that work is based in a concept that SELC team members call radical real estate. It treats land and housing as more than commodities to be wielded for profit, and thus, valuable by metrics beyond just property value. Think of the connection that many Indigenous people feel to their ancestral land, or of the deep love people have for their “home” neighborhoods and communities; neither of those passions is quantifiable in the capitalistic sense.

“One of the things that first struck me about the pandemic is the fact that people started to intuitively grasp that housing should be a human right,” says Janelle Orsi, executive director and co-founder of the Sustainable Economies Law Center. She points out that the housing market, as it currently operates, keeps many people in the States in a constant state of insecurity.

“Housing is usually most people’s largest expense. The fear of not being able to make a housing payment or rent. … It forces us into wage labor, forces us to work multiple jobs,” she says. “For a lot of people, their greatest fear is to be out on the street.” Radical real estate involves asking: what if the highest bidders didn’t control real estate? If that constant insecurity did not exist, what would we be free to do?

SELC’s work towards building radical real estate is almost always focused on helping communities acquire property by taking it off the speculative market. Sometimes, that involves leveraging existing legal structures such as using conservation or housing justice easements and building land trusts. They will also lobby for policies that give tenants of a building the first right of refusal to purchase the building, or partner with organizations to create cooperatives such as the East Bay Permanent Real Estate Cooperative.

The work also involves assisting those communities as they manage ownership. SELC hosts a regular “Zoom-in” legal advice clinic; over the past few weeks, clients have requested advice on everything from how to become their own landlords, to what steps to take to ensure long-term land stewardship, to how to share land with local Indigenous groups.

SELC’s director of land and housing justice Chris Tittle acknowledges the tension inherent in simultaneously believing that no one truly owns the land, while understanding that legal ownership is sometimes the only way to protect that land.

“The contradictions of this moment are real, and in our movement to transform that system and build the power of working people, we have to navigate those contradictions … asserting different forms of ownership that protect housing as a human right,” he says. “We’re clear that it’s not about individual, personal ownership, but about collective and cooperative ownership.”

The concept of shared ownership and responsibility among small communities isn’t new. But the rise of mutual aid programs and tenant unions, in these times coalesced by pandemic-induced need, mean that residents all across the country are participating in collective action and sharing economies, some of them for the very first time.

“Collective structures are powerful,” Orsi says. “When people come together to solve collective housing needs, they can come together in other ways, because their well being is bound up together.”

The focus on collective ownership doesn’t just apply to SELC’s clients; it’s also reflected in the organization’s structure as a worker self-directed nonprofit. Why does that matter?

“The structures that most [non-profit] organizations use can reflect the inequalities they’re trying to fight,” Taruc-Myers says. “They might be anti-capitalist, or they might be trying to fight for the liberation of certain groups. But when their structure isn’t also equitable… it harms the movements that they’re leading.”

That means that members of the SELC’s staff — directors, lawyers, apprentices — are paid the same as one another: by need. Workers are asked where they live, if they have children to support, and so on. “We know that [the apprentices’] help is just as good as our lawyers’ [help],” Taruc-Myers says. And it’s part of what allows the push for radical real estate to grow, as SELC’s lawyers train new legal apprentices and expand both their capacity and their strategies.

Christine Hernandez is one of those apprentices; five years ago, she and her husband found themselves “completely priced out of the market.” With four kids and nowhere to go, they squatted an abandoned house in East Oakland for three years, then moved to an apartment building where they supported tenants attempting to avoid eviction.

She brings a range of experiences, skills and strategies to the table at SELC. The concept of radical real estate is something that fits with what she’s wanted all along, she says: “Finding ways for the law to serve people, instead of creating ways where the law is a barrier to access.”

“There are a lot of invisible homeless — people that are not in encampments, that are not right there where you’re seeing them all of the time,” Hernandez explains. “And I think those stories are also incredibly powerful, in part because it helps other people identify with this struggle. When I have conversations with people I challenge them to consider, how many steps away from homelessness are you?”

If more people understand that, she says, they come closer to understanding housing as a fundamental human right. The level of insecurity Hernandez and her family experienced while squatting was stressful, uncertain, and traumatic; no one should have to go through that, she says. “And once you think about it in that framework, it helps you identify with people and their struggles.”