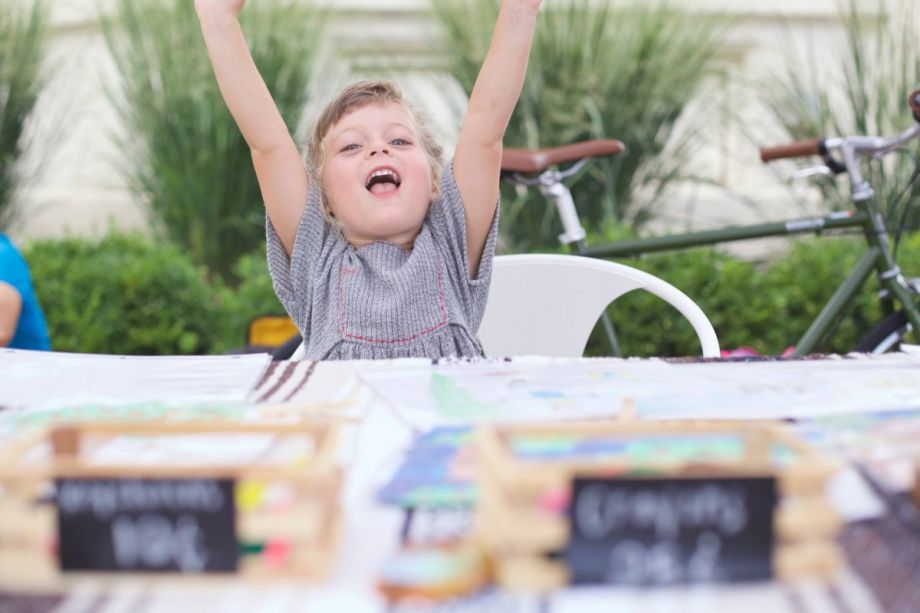 Lindsay and Nick Dewald lived in various cities across the county from New York to LA before returning to their home city of Cincinnati 11 years ago. During their time in New York, they fell in love with Williamsburg’s Brooklyn Flea and decided to start their version of the same thing in Cincinnati.

Running from April through December since June of 2011, the City Flea has seen thousands of visitors and been home to more than 400 vendors including, since 2016, dozens of young vendors thanks to City Flea’s Kid’s Market, a special market for kids 4-14.

The Kid’s Market offers a late-summer opportunity for kids to sell their wares — everything from painted canvases and rocks to homemade scrunchies and dog toys — at one of 33 booths. The idea for the market was a mingling of Lindsay’s previous experience as a teacher with the market she and her husband started. “Honestly, I have always just loved kids. I was a teacher before starting City Flea. I love working with kids,” she says. “Our oldest is eight and she’s pretty creative and always making art and was interested in what we did as the organizers of City Flea, so it came from the idea of school science and art fairs kind of mixed with the market.” She describes it as a “fun shopping experience” that makes it easy for the thousands of shoppers that come to each market to “hit every booth.” Lindsay adds that “some kid vendors will donate their profits to a local charity while others will keep some for their business to buy supplies for the next year.”

City Flea’s Kids Market is more than access to a booth and a stream of customers. “Going into it, it wasn’t only to provide a market space for kids to sell a product, but a small opportunity to teach them about entrepreneurship and running a small business,” she explains.

It’s the entrepreneurship aspect that Audry Blust, 12, has enjoyed. She participated in the Kids Market in 2019, selling homemade pom-pom slingshots made of pool noodles, duct tape, and balloons as well as knit jersey fabric dog toys and homemade puzzles. “I like the effort that you have to put into it and I just think it’s fun to come up with the idea and start and see how it goes,” Blust says. She also felt like there was some healthy competition for attention that she learned from. “There are some kids who got a lot of people. If I do another one, I’m probably going to make [my booth] a little brighter,” she adds.

She walked away from the experience learning that different products sell better in different locations based on other booths she’s done. At City Flea the pom-pom launchers and puzzles were a hit; the dog toys, not so much, even though they’ve traditionally sold better elsewhere like holiday fairs at her school. Blust’s participation in the Kids Market is one of the things that makes her mom, Geri, fairly certain that her daughter will own her own business someday.

City Flea also has proactive conversations with parents, explaining what kids should be prepared to commit to, including aspects like money management and budgeting (it costs $40 for a booth space), and lets parents know that kids should brush up on their customer service with a focus on greeting customers. After the second year, the program began including a workshop for kids interested in entrepreneurship during which some of the adult vendors spoke about their businesses and how they got started.

A handful of kids have participated each year, but many of the spaces go to new entrepreneurs each summer. So far the Kids Market has relied largely on word of mouth and social media. Most of the participants so far have been white, but between five and 10 kids of color participate each year and the Dewalds hope to increase that number by partnering more with local schools and organizations to better reach that demographic — as they’ve done for their regular markets already.

Because booth space is limited and the Dewalds don’t want to turn anyone away, applications to the Kids Market are accepted on a first come, first serve basis after they open on May 1 at 9 a.m. this year. “We’re definitely always trying to think about how we can make [the market] accessible for everyone and how we can reach the most people,” Lindsay says.