These LGBT Seniors Are Building a Shared Community in Durham 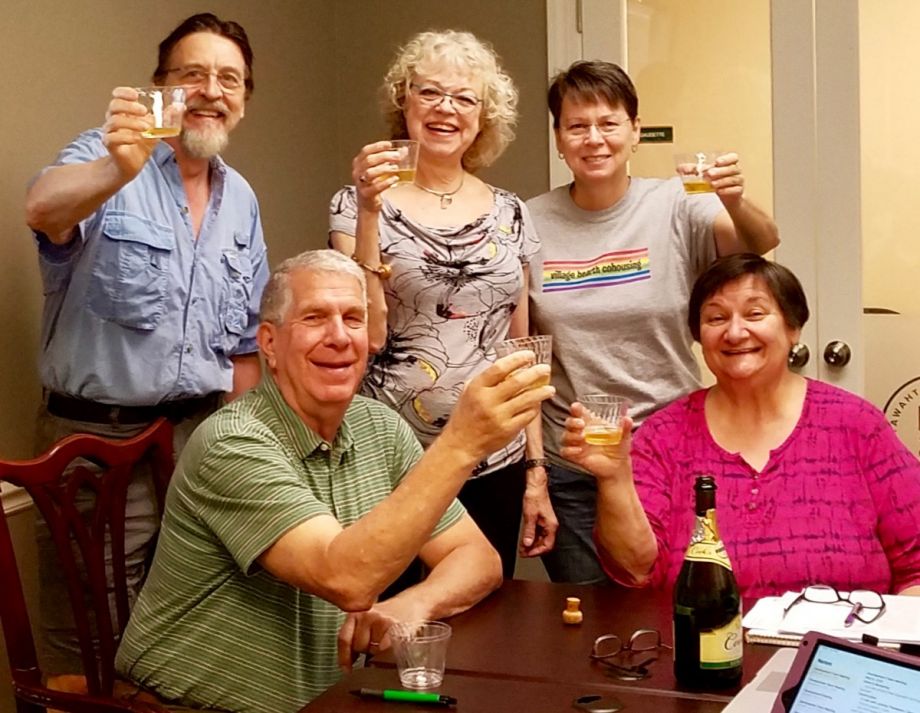 Members of the Village Hearth co-housing community toast their loan closing, which will help the community open its first phase of homes by next spring. (Courtesy Pat McAulay)

In 2007, after 30 years in the city, Christopher Ross and Allan Keech left New York and moved to a 58-acre property outside the small town of South Boston, Virginia, near the border with North Carolina. Ross, a priest in the Independent Catholic Church since 2003, had worked for the Episcopal Diocese of New York, for the city, and for a few banks on Wall Street. Keech, a watercolorist, had been the creative director for Vidal Sassoon on 5th Avenue. After so much time in the city, they wanted to be surrounded by green space.

“It was very beautiful, but it was in the middle of nowhere,” Ross says. “We were so isolated. And for me, it was very scary. There’s a big difference between isolation and solitude, and we were isolated.”

Ross is now “seventy-and-a-half” years old. Keech is one month younger. They stayed in Virginia for about a decade.

“We were enjoying it,” Keech says. “But we thought it would be necessary, as we aged, to be around people more.”

Today, Ross and Keech live in one side of a duplex in Durham, as they wait to move in to a new home at Village Hearth, a planned LGBT-oriented cohousing community for seniors at the edge of the city. The community will consist of 28 small, single-family, one-story houses, clustered together around shared walkways and a big common house with a kitchen, dining room, and laundry facilities. Last week, National Cooperative Bank closed on a $5.65 million construction loan for the community, which expects to have the first phase of homes ready for move-in next spring. Village Hearth members like Ross and Keech say they want to live in a community of people with shared experiences, and note that discrimination against LGBT people is still common in many traditional retirement communities.

“Most retirement places don’t know how to cater to our community, so we thought probably the best thing to do was to create our own environment where we can help each other as we age,” Keech says.

At the groundbreaking (Courtesy Pat McAulay)

Cohousing is a type of intentional community plan where residents have their own private homes and share certain amenities in common, somewhere between a condo and a commune. Cohousing communities have begun to spread around the United States, as Next City reported in 2014, and lately have gained popularity among seniors.

Ross and Keech were among the first members to commit to Village Hearth, putting up cash for the project in 2015. But it wasn’t their idea. Pat McAulay and her wife Margaret Roesch both left the midwest in the early 1990s and met in Durham. Over the years, while sharing rental houses with friends during trips to the beach, they would daydream about buying a big house where they could all retire together. But once retirement age actually arrived, and “seeing how cranky we all are,” McCaulay says, they decided sharing a house wasn’t actually the best way to go.

“So we explored other ideas,” she says.

McAulay is 64 and recently retired from a job teaching language arts to middle-school students. Roesch was a music therapist. Neither one has experience in development, but they learned about cohousing through word-of-mouth, and by reading about it, and attending a conference on senior cohousing in Colorado. Together they had invested $25,000 in the project before even buying the land in 2015. McAulay says that for cohousing projects, “the failure rate is huge,” and says that hiring professional consultants to walk the group through the financial aspects of the project was a key decision.

Mary Alex Blanton, a senior vice president at National Cooperative Bank, says the bank typically works with housing co-ops, but Village Hearth is the first cohousing project it has lent to. The group had already put so much equity into the project that the loan wasn’t terribly risky, she says — by the time the bank made the loan, 24 of the 28 homes were already pre-sold, according to Blanton. Now there are only two left to be sold, McAulay says.

The land cost $190,000. It took 13 months to get the property rezoned and annexed into Durham, McAulay says. Homes are sold starting at $299,000. The group plans to leave 10 acres of the property for open space, and has hired a local landscape architect to plot out native plants for the property.

Everyone who signed on to live in Village Hearth became part of the effort to market it to new residents. They also tabled at festivals for the Eno River, and advertised in local newspapers as well as outlets like Lesbian Connection, The Gay & Lesbian Review, The Washington Blade, and the San Francisco Bay Times, McAulay says.

The point of cohousing is community, McAulay says, and knowing that someone will come knocking on your door if you don’t show your face for a day or two. For many LGBT seniors, McAulay says, “The isolation is tragic.”

“While many gay folks either have been married and have children or they’ve adopted children, primarily, individuals in our community are alone,” McAulay says. “If they’re not with a partner they’re definitely alone, and even if they are with a partner, one of the partners will die first … People in our generation have worked so hard to come out of the closet, and what we’ve heard is happening is that people who go into nursing homes can’t be themselves. They can’t even hint that they’re queer.”

The cohousing model lets residents set boundaries on how much community time they want day to day. If you’re on your front porch, you’re “fair game” for conversation, Ross says. On the back porch, residents can expect privacy. They’ll have their own kitchens as well as the common kitchen. But the houses are close together, facing one another, to encourage people to interact.

As Roesch says, “That’s the whole purpose of us coming together — supporting one another.”