The Various Sticks and Carrots for Putting Unused Land to Use 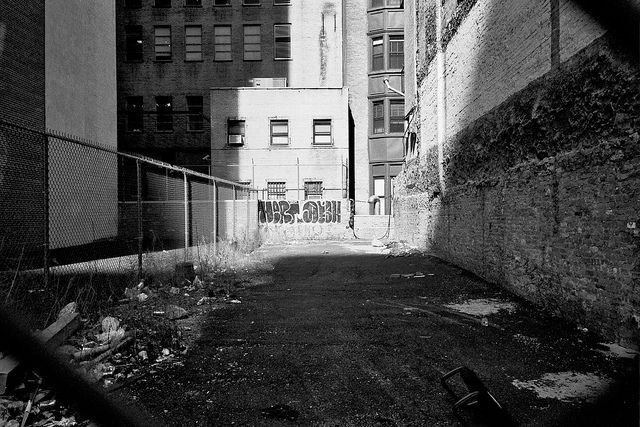 The New York State Assembly is considering a bill that would make it possible for New York City to cut owners of vacant land a break on their property taxes. That is, if the land were made available for public benefit, such as having it turned into pocket parks or gardens.

Vacant land makes up almost 6 percent of the city, or 8,900 acres. That comes out to some 22,000 parcels, about half of which are located on Staten Island.

Should the legislation pass, any vacant land would be relieved of its property tax burden for as long as it remained at the use of the public, and only for the part of the property that has been opened up. “Public benefit” excludes anything that would accrue profit to the landowner.

The bill, which is less than a page long, leaves the details of the tax abatement largely up to City Hall. It specifies that a given property must be open at least 25 hours per week (20 in winter) and gives examples of uses the public might expect, such as a park or a garden. But it doesn’t limit properties to those uses.

“You don’t want to make it onerous for someone to do it,” City Councilmember Stephen Levin said. “You want to encourage it. You also want to ensure that people are actually opening space.” Levin’s office said that any details beyond that would probably be left to the New York City Department of Finance.

Because the legislation is specific to one city, state lawmakers are waiting for a resolution from the New York City Council before moving it forward. According to the bill’s sponsor, Assemblyman Joseph Lentol, the state legislature will have the chance to act on it upon returning to session in January 2014.

Nothing in the legislation requires a public use to become permanent, though the tax benefit would only last as long as the land’s actual use to the public. Still, opening up a parcel wouldn’t mean an owner couldn’t turn a profit when the time is right. And for the neighbors tired of living next to a vacant lot, the legislation could be a valuable tool for pushing owners to hear how they could use the land. In simple terms, it’s an incentive to do something productive with a lot, rather than simply let it molder until it is ready for development.

“There is a lot of value in both carrot and stick incentives to getting landowners to do the right thing with property,” said Mike Brady, vice president of policy at the Center for Community Progress. “Being able to offer a carrot is really important.” Other states pursuing an incentive approach are doing so with much less flexibility than New York. Uses tend to be more narrow, for instance, and the landowner is often locked into a definite length of time.

A bill now under consideration in California would allow counties to give urban properties a reason to shift use to agriculture. To have their tax burden lowered, landowners would have to agree by contract to let their property be used to grow food for at least five years. Utah has already passed a similar measure for its cities. In both cases, the incentive lowers taxes for urban farmers to levels similar to what they would pay if their land were in real farm country.

In 2010, the Maryland legislature gave Baltimore authorization to provide tax credits at any level to vacant properties used agriculturally or for expanding access to fresh food. The city, however, opted not to use that authority when the matter came to a vote the following year.

New Jersey is taking a more neutral approach. Since 2011, older cities in the Garden State have had the authority to sell publicly held land to non-profits for urban agriculture. Previously, the cities could only lease out such land. The law also permits municipalities to sell the land for nominal fees.

On the other end of the matter, some cities are making it more expensive to neglect land or buildings. Kentucky passed legislation in 2004 that authorized communities to assess a much higher tax on unused properties. Louisville took the lead, tripling the property taxes for vacant parcels. There, and in a growing number of Kentucky communities, taxes are tripled once a property is designated an “Abandoned Urban Property.” The designation is made when land hasn’t been occupied for a year or more and has either become unusable, a nuisance or seriously tax delinquent.

Washington, D.C. goes even further. “Vacant Real Property” gets taxed at a rate nearly six times higher than the rate of residential property. If the property is found to be blighted, it goes nearly 12 times higher.

In cities with so much vacant land that much of it doesn’t have any market at all, changing the way in which property gets assessed could make it more likely that land is put to better use. Philadelphia charges owners of vacant lots a $150 annual fee, reduced from $300 in 2012.

In the wake of the financial crisis, Chicago and Cook County passed ordinances in late 2011 and early 2012 requiring owners of vacant properties to register them and keep them maintained. Failure to do so would result in fines of between $500 and $1,000 per day, per violation.

Lawmakers in Ohio, meanwhile, are moving to authorize $60 million entirely for tearing down dilapidated buildings around the state.

New York City has counted vacant lots but does not seem to know how many of its buildings aren’t in use. In 2011, an organization called Picture the Homeless did an inventory of vacant buildings, including going door to door in high-vacancy areas, and found, conservatively, 3,551 vacancies. Few of these were shown as vacant in the data provided to Picture the Homeless by various city departments. The organization is pushing New York to conduct its own audit of vacant buildings.

The Bloomberg administration won’t comment on any legislation until its had a first hearing, so we don’t know the outgoing mayor’s take on the vacant land tax abatement. Asked about the city council resolution’s chances for passage, Levin said that in talks with his colleagues, he has seen much support. “This is something that will benefit a lot of different neighborhoods,” he said. “No one likes to see a vacant lot.”

The main reason why officials might object to the proposal is out of money concerns. Realistically, Levin explained, “If the city gets 100 to 200 participating properties, say they have an average tax burden of $7,000 a piece. That’s $700,000 to about $1.5 million in lost tax revenue. In a city budget of $70 billion, that’s not that much.” He went on to point out that there are parts of the city where developers get tax breaks for building luxury homes.

Still, Levin said, “I represent neighborhoods where a community garden is a lot more welcome than a luxury condo.”

Brady Dale is a writer living in Brooklyn. Find him on Twitter.