The Urban-Rural Water Wars of Nevada – Next City

The Urban-Rural Water Wars of Nevada 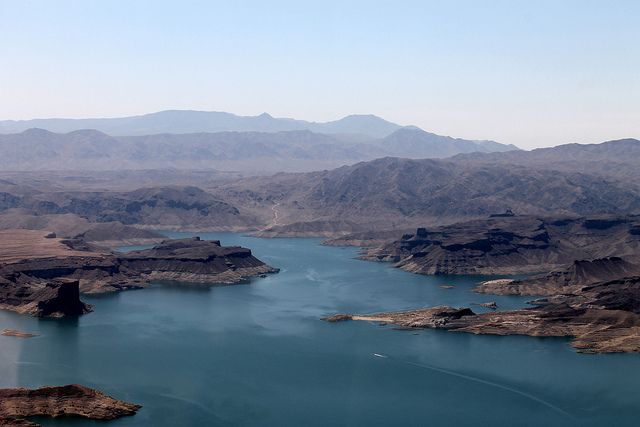 Las Vegas has a water problem. Ninety percent of the city’s water comes from the Colorado River, specifically the reservoir at Lake Mead. But Nevada’ yearly allotment under the Colorado River Compact, some 300,000 acre feet, isn’t enough for the ever-growing population of its largest city.

Thanks to drought conditions that stretch back to the year 2000, the water level at Lake Mead has been dropping steadily over the last several years. That reservoir, created by the Hoover Dam, is now less than 50 percent full. Some estimates show the lake could run dry by 2021 if current trends continue. Meanwhile, the Vegas metro area keeps growing. It’s now home to about 2 million people, up from 750,000 in 1990.

And so, for the last quarter-century, those in charge of getting water to the people of Las Vegas have been eyeing the relatively wet part of the state, on Nevada’s eastern edge, as a possible source of more fresh water. Pat Mulroy, general manager of the Southern Nevada Water Authority, has for years pushed for a plan to build a pipeline from the city to rural valleys on the Nevada-Utah border, at an estimated cost of around $15 billion. Mulroy calls it “Nevada’s safety net project,” and it has moved along slowly but surely. The state engineer has, in recent years, secured approval for some 84,000 acre feet per year to be siphoned off from the vast rural basin to Las Vegas.

But last week a Nevada judge ruled against the project, saying the state water engineer needed to recalculate the impact of pumping huge amounts of groundwater out of the ecologically fragile valleys. The judge found that the state engineer didn’t provide sufficient information about “when the mitigation part of the monitor, manage, and mitigate plan” would go into effect — in part because the complex environmental issues involved make it impossible to predict how the pumping would affect the 20,0000-square-mile area in question.

Environmental groups that have long opposed what they called a “water grab” hailed the judge’s ruling. “In reading the decision, it seemed to us that the judge really listened and understood the fundamental dilemmas that are inherent in these large water permitting projects,” says Abby Johnson, president of the Great Basin Water Network, an advocacy group and one of the lead plaintiffs in the case. “I think this gives the opponents of the water grab, and the local governments who have been raising alarm for a quarter of a century, new energy and new confirmation that we’re on the right track.”

The fight over water in eastern Nevada isn’t over yet, as the defendants may appeal the decision. Las Vegas is still growing, and many of the city’s most ardent boosters say that its growth cannot and should not be hampered by inadequate water supplies.

“Am I supposed to sit here and say, ‘Oh, whatever cards Mother Nature deals me, I’m going to accept?’” Mulroy said on a talk show in 2007. “And the fate of 2 million people doesn’t matter to me, they’re just going to have to live with whatever Mother Nature decides to dole out? That is about as irresponsible a statement as I’ve ever heard someone come up with.”

According to Peter Gleick, director of the non-profit Pacific Institute, the pipeline is not Las Vegas’ only option for changing the hand it’s been dealt. First, he says, the city could improve its conservation efforts. “You can’t cut your water use to zero, but you can do a lot better in Las Vegas in terms of efficiency and productivity,” says Gleick, whose organization has been studying the water situation in southern Nevada since the 1990s. “That means doing what we want with less water. I want to be clear: I don’t mean shorter showers. I mean efficient showerheads. I don’t mean no gardens, I mean water-efficient gardens.”

Gleick says other options include negotiating with the six other states that draw from the Colorado River in order to lease or trade a bigger share of water for Las Vegas, or buying up farmland in the Las Vegas area and diverting what was irrigation water for urban uses. He mentions even more creative solutions, too. What if Nevada built a desalination plant on the California coast in exchange for permits to take more Colorado water upstream?

He acknowledges that none of these solutions address the bigger question of whether and how to limit urban growth in arid regions. “Our assumption and our behavior in the past has always been let cities grow as big as they can, and somehow we’ll find the water,” Gleick says. “That’s what we’ve done, and it’s worked for a long time. But it doesn’t work any more. We’ve gone up to and, I would argue, have passed the limits of water availability in the West. We can no longer assume that cities can grown indefinitely — that there will always be another river or aquifer to tap.”

Hovering over the Vegas water debate is the example of California’s Owens Valley. This was the water resource tapped by Los Angeles during the California Water Wars of the early 20th century (immortalized in the 1974 film Chinatown). Today, the Owens Valley is a desiccated wasteland, where blowing alkali dust creates a dangerous level of air pollution — a situation the state has already spent more than $1 billion to mitigate.

For Johnson, of the Great Basin Water Network, the Owens Valley is a frightening reminder of how high the stakes can be in the urban-rural tussle over water. She and her allies are ready to fight the Vegas pipeline with whatever legal means are at hand, and she says she is hopeful that the project will eventually collapse under its own weight.

“As costs escalate, it’s going to become more likely that the leadership of southern Nevada is going to see this doesn’t make economic sense,” Johnson says. “Even if they do want to throw rural Nevada under the bus.”

Mulroy has announced she will retire in 2014, and Johnson is hoping that changing economics, climate and circumstances will force Las Vegas to find another way to slake its thirst. “We could be much more innovative if it were something that the leadership wanted to do,” she says.

The recent court ruling, Gleick says, is a positive sign for those who want to see that creative leadership, but it is by no means the final chapter in the proposed pipeline’s story.

“It is a little bit of an indication that the old style of water development — that is, looking for new sources of supply farther and farther afield, and in particular looking for unsustainable sources — is no longer a rubber stamp,” Gleick says. “But it’s still entirely possible the project will be approved.”