The ‘Sweet Caroline’ Effect of Resilient Cities – Next City 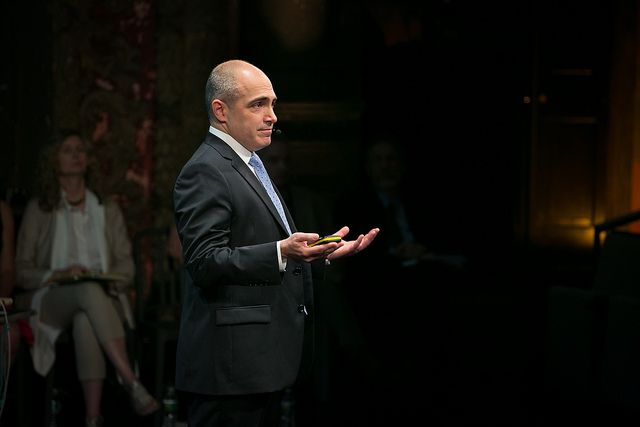 One might be tempted to think that the Yankees’ musical tribute to the loathed Red Sox the day after April’s Boston Marathon bombings was an act of basic human decency. But there’s actually more to it than that, said Northeastern University psychology professor David DeSteno at Monday’s The City Resilient conference in Brooklyn. And the episode points to a capacity for “nudging compassion” that can be a key to building urban areas that bounce back from tragedy, be it a bombing or natural disaster.

What happened, DeSteno suggested, is that an incident of the emotional magnitude of the Boston attacks prompted people to focus on what they shared. “By categorizing themselves as fans of baseball, and not fans of the Yankees or the Red Sox,” he said, “we actually heard ‘Sweet Caroline’ play at Yankee Stadium, which doesn’t happen very often” — here, the New York crowd laughed — “because that’s the Red Sox theme song.”

DeSteno’s thinking jibes with an idea that floated around shortly after the bombings: So many Americans already had some experience with Boston, whether as a student, tourist or in the course of work, that the bombings triggered a stronger response than they otherwise might have. The conference, put on by PopTech, the Rockefeller Foundation and the Brooklyn Academy of Music (known as BAM), had as one of its central themes how you go about building a city’s resilience during those periods in between catastrophes.

Luckily for our survival, perhaps, it turns out that such social compassion can be manufactured. It doesn’t even take very much. DeSteno, who directs Northeastern’s Social Emotions Group, described one fascinating experiment on the social power of synchronization. (The experiment is detailed in a 2011 paper called “Synchrony and the Social Tuning of Compassion,” coauthored with Piercarlo Valdesolo of Harvard, in the American Psychological Association’s journal Emotion.) In nature, we might find ourselves moving in like-time with others in a conga line or maybe a military march. In the lab, subjects were told to put on headphones and tap along to a rhythm they heard.

Confederates sitting across from them did the same. Some of the two participants’ rhythms were synced up, others weren’t. Afterward, the subjects were told to assign logic problem sets of varying degrees of dreariness to the confederates. The subjects could also opt to help behind the scenes, reducing the total amount of work left to the confederate.

Subjects tricked into tapping in time not only indicated feeling more compassionate toward others participating in the experiment, but also proved more willing to help out with the work they’d assigned them.

Of course, a citywide conga line might be a bonding experience, but the logistics are challenging. That’s where, though, DeSteno said the digital world can help trigger the Sweet Caroline Effect. “In the face of disasters,” he said, “social media and computational power offers intriguing possibilities.” DeSteno said that he and others are working with Facebook to figure out strategies for helping in high-stress situations.

“One thing we can do in a conflict,” DeSteno said, “is, in milliseconds, scan your profile, find any similarities that you have in common, whatever it is, and surface that information, automatically, as part of your interaction.” Even liking the same coffee joint — even if it’s Starbucks — is a start. “If you can get them to a tipping point,” DeSteno said, “they will spread virally. They will cascade.”

The underlying notion seemed to get validation from a new data set talked about at the conference. The Associated Press and the NORC Center for Public Affairs Research released the results of its work examining how well New York City communities have rebounded from Hurricane Sandy. The report found that “neighborhoods lacking in social cohesion and trust more generally are having a difficult time recovering from Sandy.”

What we’re learning about the importance of social compassion, DeSteno argued, is telling us that urban resilience needs to come from the bottom up. For that matter, others added, cities aren’t in a particularly great place for imposing resilience. Abundance and redundance, several participants said, are key to surviving disaster, while more cities are moving toward a lean-and-mean approach. (Urban researcher Anthony Townsend said during the conference that the rush toward centralized, complex “smart” cities tends to make urban areas more efficient, but also a bit “brittle.”)

That puts cities in a tight spot. There’s hope, though, and again it has to do with going digital. During disasters, people are already going online. The AP-NORC study found that 33 percent those surveyed in the New York City area used email to communicate during Sandy, and just slightly fewer — 31 percent — used Facebook the same way. (Twitter, it’s worth noting, wasn’t nearly as central. Just 7 percent said they used it personally. But that’s not counting its utility in informing all those emails, Facebook posts, news reports and so on.)

In New York City, the Bloomberg administration followed the lead of cities like San Diego, Dallas and San Jose and partnered with Nextdoor, a neighborhood-specific private social network. It’s easy to see Nextdoor as no more and no less than another press release delivery mechanism for the city. When disaster strikes, that’s not nothing. The platform, Bloomberg said, “provides the city with a direct line of communication to residents about important and often critical updates.”

But in good times, social platforms can also do the work of drawing out the social ties that might otherwise stay latent. If and when the next Sandy comes, what a Nextdoor has already done to remind New Yorkers of what they share might be as important than how it greases the sharing of mayoral edicts.

Another finding from that AP-NORC survey of Tri-Staters: Some 77 percent of those affected by Sandy said that it brought out the best in people in their neighborhood. Just 7 percent said that it brought of the worst. DeSteno said that he wasn’t surprised. His work, he said, has taught him that people contain the raw fodder for all sorts of reactions. “Human nature is saint and sinner,” he said. The trick is figuring out how to “tip the scales.”