The Promises and Pitfalls of Desalination – Next City

The Promises and Pitfalls of Desalination 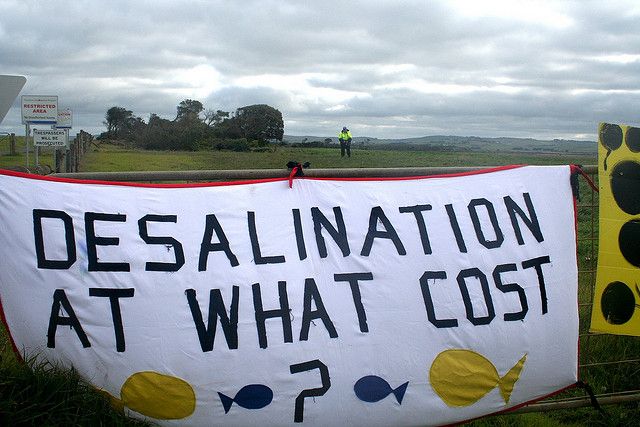 Water shortages and population growth around the world have led to an explosion in the practice of desalination, or removing the salt from ocean water or brackish groundwater to make it potable. According to Global Water Intelligence, an industry analysis publication, some 16,000 desalination plants have been built across the globe in the last 45 years. Production of desalinated water, mostly for municipal use, has gone from essentially zero to an astonishing 60 million cubic meters per day worldwide.

For energy-rich nations with arid climates, such as Saudi Arabia and the United Arab Emirates, desalination of seawater has made possible the construction of gigantic, luxurious new cities. Gulf states are, in fact, among the top users of this technology. Other nations with big desal industries include Spain, the U.S. (where much of the focus has been on brackish water so far), China, Algeria, Australia and India.

As populations boom and water levels fall in the American West, desal comes up more and more often as a possible solution. California, with its 840 miles of coastline, is perfectly positioned to become a major player in desalination. The state, which could face a third consecutive year of punishing drought, is the site of 17 proposed desalination plants, and some have even floated the idea that California could host desal plants for other water-poor states, such as Nevada.

Many current proposals have been on the drawing board for more than a decade. So what’s stopping desal plants from appearing on a large scale in California? A series of reports from the non-profit Pacific Institute, which has studied the question closely since 2006, lays out several issues hampering further implementation of the technology.

First among these is cost. Desal plants are hugely expensive to build and operate. Water companies would have to pass those costs along to customers. Fluctuating demand can make this type of massive capital investment even riskier for utilities. The plants are also are energy intensive — another factor in the operating expense — and could be significant contributors to greenhouse gas emissions.

The environmental costs of desal are still only partially understood, according to a new report from the Pacific Institute. The possible negative effect on marine ecosystems has emerged as a major stumbling block to the construction of desal on the California coast.

“There are impacts associated with intakes and with the discharge of brine,” says Heather Cooley, co-director of the Pacific Institute’s Water Program. Cooley says a variety of practices and technologies are involved in desal, each of which can affect the marine environment differently, and that they have not been sufficiently studied. “We don’t have good data on what these impacts are,” she says.

The plants proposed for the California coast would use reverse-osmosis membrane technology. If the mechanisms sucking in seawater are in the open, marine life can get sucked into the screens and dies. Larvae and eggs of creatures at the bottom of the food chain could be wiped out in massive numbers. Subsurface intakes built beneath the ocean floor can virtually eliminate this effect, and may even be more energy efficient in the long term. But they are expensive to build.

Then there’s the disposal of the super-salty brine left over after the desalination process is complete. That liquid, produced in huge quantities — roughly one gallon for every gallon of desalinated water — is denser than normal seawater and could cause its own set of problems, particularly for desal plants located in areas without a lot of tidal flow.

All these factors, combined with the strong environmentalist constituencies in many coastal California communities and strict state regulations, mean that developing desal plants can turn into an expensive headache for water companies. In 2006 the number of proposed plants in California was 21. Now it’s down to 17, despite strong support for developing desal among many elected officials.

In San Diego County, a company called Poseidon Resources has one huge plant under construction after 10 years of environmental review. But another proposed by Poseidon, in Orange County’s Huntington Beach, ran into trouble in November because of the California Coastal Commission’s changing regulations. The commission, concerned about the effect of the intake system on marine life, indicated that Poseidon would have to redesign its plans to comply with regulations that were revised just three years ago.

Poseidon balked at the commission’s suggestion that it alter its design, saying that would add $270 million in costs to a plant already projected to cost $900 million, and that the company would have to excavate 64 acres of sea floor to in the process. When it became clear the commissioners would not vote in favor of the Huntington Beach facility as proposed, the company withdrew its application and agreed to go back and study the incorporation of subsurface intakes.

The Huntington Beach project began the permit process in 2006. In that same year, the Pacific Institute’s first report on California desal came out, entitled, appropriately enough, “Desalination, With a Grain of Salt.” Back then, the authors had this to say, and it seems more relevant than ever today:

The potential benefits of ocean desalination are great, but the economic, cultural, and environmental costs of wide commercialization remain high. In many parts of the world, alternatives can provide the same freshwater benefits of ocean desalination at far lower economic and environmental costs. These alternatives include treating low-quality local water sources, encouraging regional water transfers, improving conservation and efficiency, accelerating wastewater recycling and reuse, and implementing smart land-use planning.

In other words, desal might one day become part of the solution to California’s water problems. But in a state that values its fragile marine environment, it can’t be the only approach.