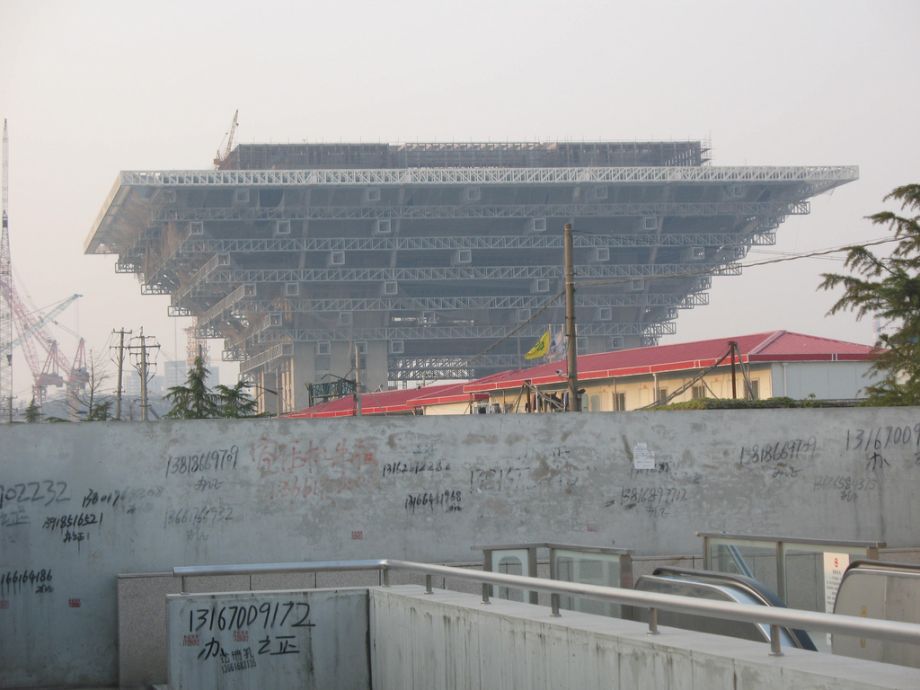 The China Pavilion, under construction in Shanghai. Gary Soup

Ever since Prince Albert invited the world to London’s Hyde Park in 1851 and dazzled them with the Crystal Palace, grand expositions have been seen as one of the premiere forums for daring, inventive architecture. The temporary nature of these events and the spirit of (ostensibly) friendly competition that fuels them creates an environment in which architects are encouraged to experiment.

In more recent decades, expos have, at least in the United States, taken a back seat to Olympic ceremonies when it comes to international competition; and, like expos, these events are seen as plum opportunities to show off daring, high-profile designs. But for host cities, both Olympic and exposition events remain controversial, as the return on investment for staging such an event is often in the negative range. In Vancouver, even with the city’s remarkable effort to blend Olympic venues into the post-ceremonial cityscape, nearly 60 percent of residents believed the event to be a boondoggle in the weeks leading up to its opening ceremonies.

And yet, roughly the same percentage thought that the legacy left by the games would be a positive one. This may have something to do with the fact that Vancouver’s efforts toward sustainability showed a characteristically (for that city, at least) forward-thinking approach to urbanism: not only were venues designed to be environmentally low-impact, they were also designed to be re-used after the games. Vancouver used the Olympics to build a new set of public amenities, getting double for its money, in essence — even if there was plenty of it that was spent in the process.

Meanwhile, across the Pacific, Shanghai is gearing up for the May opening of Expo 2010, which is expected to be the largest such event ever staged (yes, America, the rest of the world still has expositions). In the months before, media attention has been growing, and several recent stories have highlighted the growing frustration of some Shanghaiese at the disappointing fact that, of the 56 pavilions being built at the massive 1300-acre fairground (slightly larger New York’s Flushing Meadows Park, site of the 1939 and 1964 World’s Fairs), a jaw-dropping 52 will be taken down once the expo is over in October, just six months later. (Check out an incredible collection of photos of the preparations here).

Expo 2010 will leave an indelible mark on the city, with the Chinese government pouring $45 billion into not just the site of the festival, but to neighborhood infrastructure and a transit system expansion that would make any mayor’s face turn a vivid shade of green: the city has added six — count ‘em — six new subway lines in preparation. But even with all of that, one can’t help feeling like a rare opportunity to build a unique urban model for the future may have been lost (especially considering the expo’s theme, “Better city, better life,”) since most of the buildings will wind up recycled into more standard fare or, worse still, demolished completely, their materials wasted.

Expositions have a distinct advantage, from an urban design perspective, over Olympic ceremonies in that they call for a large number of (relatively) smaller buildings, as opposed focusing on a series of massive athletic venues. But with a little bit of international cooperation and ingenuity, couldn’t events like Expo 2010 be used in the way that Vancouver used the recent winter games?

Imagine a exposition site that was divided up by a series of thoroughfares that connected to the city grid, or even temporarily closed existing streets on the grid to cars to create pedestrian areas. There’s no reason why the architects of the spate of international pavilions couldn’t be invited to work with city planners from the host city to determine how their buildings would be used after the crowds disperse; the Dutch pavilion could become a fire station, with the Japanese pavilion next door converted into apartments with streetfront retail. It would be a wild neighborhood, to be sure, but the idea of living on a street that features Zaha, de Mueron, and Isozaki cheek-to-jowl has its own wacky appeal, doesn’t it?

Already, several American cities — including Houston and San Francisco — are mulling over making what would be the first U.S. bid for an international exposition in almost half a century in order to host the event in 2020. As evinced by South Africa’s nascent World Cup festivities and Rio de Janeiro’s coup in Copenhagen for the 2016 Summer Olympics selection, today every continent is a serious contender, and a potential U.S. bid won’t be able to rely on “Hey, America’s back, y’all!” working out as a campaign slogan. Any city that expects to have a serious shot at Expo 2020 (or future Olympic games, for that matter) will need to learn from both the mistakes and the successes of Vancouver, Shanghai, and their ilk.

As Xiangming Chen, a professor from Shanghai, noted in a quite in a recent National Geographic article about his city’s Expo preparations, “[a] city can’t just build its way to greatness. The bigger question is, How does it rebuild a sense of community that’s been lost in tearing down the old and building up the new?” For any city thinking about bidding to host a major event, this question will likely prove increasingly vital as the competition grows more fierce.