The Music and Dance of One Human Family Debuts in Chicago 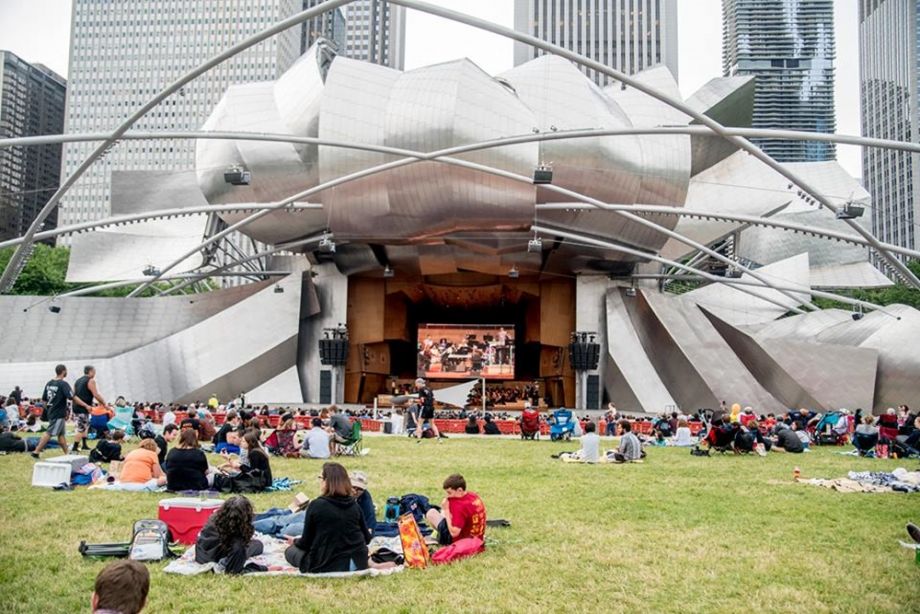 On June 14, 2018, Chicago’s Millennium Park was filled with spectators from across the city, the suburbs and even out of state. Those closest to the stage sat in rows of wooden auditorium style chairs, while further back listeners relaxed in their own folding chairs or lounged on blankets spread on the sprawling lawn of the park’s Pritzker Pavilion. The audience was as diverse as Chicago itself: African American, Latinx, Asian, Caucasian, singles, pairs, families, American citizens and immigrants of all ages. The atmosphere was festive, yet laid back.

They gathered on the warm summer-feeling night to witness the culmination of months of composition, collaboration, and revision in the form of “Chicago Immigrant Stories,” the product of Chicago trumpet maestro Orbert Davis and his Chicago Jazz Philharmonic. The 60-piece orchestra is influenced by both American jazz and European classical compositions.

Davis was driven to create Chicago Immigrant Stories to protest against the travel ban against citizens and refugees from seven predominantly-Muslim countries, imposed by the Trump Administration shortly after taking office in 2017.

“We as Americans should know better. We’ve been down this road. We’ve been here before. We should be beyond that,” says Davis. “I look out from my office (across from Walter Payton Magnet School) and I see African American kids, and I’m seeing white kids. I see Hispanic kids; I see Indian kids; I see Asian kids and they’re all getting along. This is what America is. America is not one race. How can we dare allow a political arena to take us back to that time of fear, to that time of mistrust?”

Harmonica virtuoso Howard Levy collaborated with Davis in conceptualizing the piece and was the lead composer for “Theermanam,” one of its movements. Guest artists from three different regions of the world joined the 60-piece orchestra for the performance. China was represented by musicians Kerry Leung, Menghua Guan and Guanglong Li. Musicians Kalyan Pathak and Hitesh Master Nayak, along with dancers Vidya Govind and Asha Rowland from the Natya Dance Theater, represented India. Drummers Sekou Conde, Obari Cartman, and Babu Atiba, along with dancers Cheretta Hill-Botchwey and Regina Perry-Carr, represented countries from West Africa.

The Trump administration’s order mandating the separation of children, including infants, from their undocumented immigrant and asylum-seeking parents at the country’s border with Mexico, heightened Davis’ rejection of an isolationist, nativist mindset.

“We can’t just draw screens between us. We can’t be afraid of each other and say well, you’re different and I deserve to be here because I am of this complexion or I am of this heritage and you don’t belong here,” Davis says.

The seamlessness of the performance belied the complex adjustments and tight timelines behind the coming together of its various moving parts.

Davis met with Levy in April to map out the different experiences that shaped the composition. He didn’t actually start composing the music performed at Pritzker Pavilion until maybe late April or early May, he says.

“It was exhausting. I worked literally nonstop from late April until the Saturday before the concert. We didn’t know exactly what the finished product would be. It was the journey that took us there,” Davis says.

One of the most challenging questions represented the basis of the entire composition: which communities should be represented?

“It took about two months to get going with the project,” Davis says. “There were a couple of communities that simply didn’t respond. We would send emails and calls and there wasn’t much interest. We kind of learned as we went on.”

Musicians were recruited in various ways. Pathak had been a student of Davis’ when he taught at Roosevelt University in downtown Chicago and had also performed in the past with Levy. Davis focused on Conde, Atiba and Cartman because he wanted to feature African drumming in the composition. Conde, in particular, had studied West African culture and West African drumming while searching for his own lineage, according to Davis.

“It was the music that led him to Senegal. And because of the affinity he felt toward the music it became a thing where he felt — and I think it’s true, that that’s exactly where his people are from,” Davis says.

Chinese musician Kerry Leung was totally unknown to Davis before he began the project.

“For the Chinese American community, I searched Google ‘Chinese American Musicians in Chicago’ and Kerry’s website came up,” says Davis. “I was intrigued with the instruments that he played. I watched a couple of his videos and it fit the bill so I called for a meeting. As we talked, he was a little apprehensive at first, saying that he doesn’t improvise … so we discussed the process and as we did he discovered that it was a perfect fit.”

The composition itself was a work in progress almost until curtain time, according to Davis. Between October 2017 and the beginning of 2018, a series of jam sessions took place where Davis, Levy, drummer Ernie Adams and bass player Stewart Miller would sit and talk, sometimes for four or eight hours at a time. Davis recorded each of the sessions.

“It was when I dissected the content of those conversations that the music sort of wrote itself,” Davis says.

Davis also held a series of three sessions he called innovation labs with Leung and his fellow Chinese-American colleagues at the Chinese American Museum in Chicago, with Conde and other black musicians at the DuSable Museum of African American History and with Pathak and other Indian-American musicians at Indian Boundary Park Cultural Center to determine commonalities, similarities, and story themes for the composition.

“We did a live jam session in front of an audience (at the museum) with nothing composed and basically continued our conversation with a live audience,” Davis says.

Incorporating Indian music into the composition was also a challenge for Davis.

“It was so difficult because it was based on a tradition that was totally foreign to me … For the [India-themed movement], Kalyan did so much work in educating us on the Indian tradition. Even up to before we got up on the stage we were shaping that movement in what it would become in particular with the aspect of the storytelling, the dancing,” Davis says.

Similarly, the African movements of the composition were almost extemporaneous, according to Davis.

“As a matter of fact, the melody to [the west African-themed movement] didn’t come in until the end. The entire piece is based on the African experience of improvisation, spontaneity, and communication,” Davis says.

The message Davis desired his audience to take away from the performance of is simple: we’re more alike than we are different.

“I want everyone to feel like they’re at home,” he says. “Everyone there should feel like this is my backyard and this is my family, these are my friends. If we continue that philosophy, if we continue that feeling, the next time someone gets behind a podium and says they don’t bring their best and this and those people, we can just shake our heads and say ‘Nah, I know different. Nah, nah, I don’t believe you.’ That’s what I want.”