The Big D Gets a Big Park – Next City

 The Big D Gets a Big Park 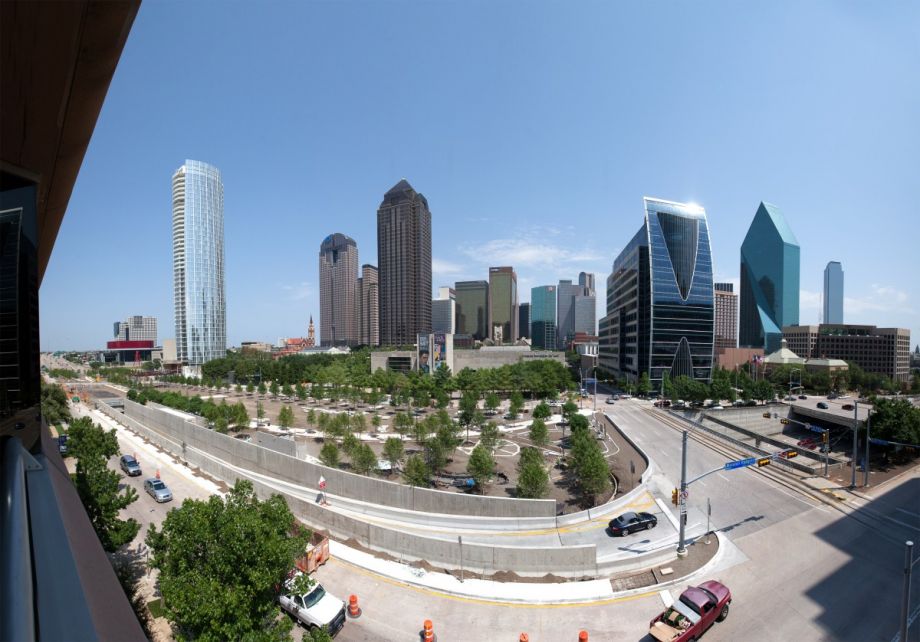 Klyde Warren Park, under construction over the Woodall Rodgers Freeway.

This weekend Dallas will see a big shift in its urban landscape, to come in the form of a park over a highway.

Klyde Warren Park, a 5.2-acre deck park spanning the Woodall Rodgers Freeway, opens up to the public this Saturday. It will connect the Arts District Downtown to Uptown businesses and residences and provide a new green space for public engagement and interaction.

Taking 10 years to plan and $110 million to build, Klyde Warren park is most recent “bridge” to come online in the last seven months, succeeding the newly christened, Santiago Calatrava- designed Margaret Hunt Hill Bridge, which opened in March to the tune of $182 million.

The park offers just about every amenity thinkable: A botanical garden with native plants, a children’s park, an interactive fountain, the Dallas Morning News reading and games room, a great lawn, performing arts pavilion, restaurant/food kiosk, a grand plaza with more fountains, several promenades, the east lawn, a commons with permanently installed games, and a dog park. The McKinney Avenue Trolley will also make frequent stops at the park coming from Uptown. Additionally, the park will be Wi-Fi enabled, have security lighting installed throughout the property, and will be monitored by full-time security officers.

Working with the Social Fabric

Much like the Margaret Hunt Hill Bridge, Klyde Warren Park faces apprehension and anticipation about how another large-scale capital improvement project will affect the social fabric of the city. It is named after 10-year old Klyde Warren, son of billionaire Kelcy Warren, who donated $10 million in his son’s honor. There is no doubt that Dallas’ philanthropic roots continue to shape the urban context, but regardless of its world-class status the park will have to address the wants and the needs at the local level, and convince people that it is a solution for social connectivity.

In March, the Woodall Rodgers Park Foundation hired a new president, Mark Banta, to take the reigns of the project, Banta, who served as general manager for the 21-acre Centennial Olympic Park in Atlanta since 1996 and has plenty of experience. He brings the Bryant Park model, which offers up regular programming and promises a “safe, clean, and active” environment that sends a powerful message that public spaces are under control.

Klyde Warren Park folks aren’t speculating about programming. The park team is aware of the challenges of being in the spotlight and the expectation of success that comes along with an $3 million dollar annual budget.

“Finding corporate partners that want to be associated with our brand and with our programming, but without making it feel too commercial, is the balancing act,” Banta said.
      
 For now, it seems, the scheduled programming is meant to entice patronage and builds off the wisdom of sociologist William “Holly” Whyte, who observed that “What attracts people most, in sum, is other people.”

Successful Placemaking and the Learning Curve

Downtown’s two most recent parks, the 1.75-acre Main Street Garden and 1.5-acre Belo Garden, provide some insight into how parks function in Dallas. Main Street Garden has become a popular spot for dog owners, provides a contained dining area, and serves as setting for big seasonal events (more recently it has become a regular launching pad for Critical Mass bike rides). Belo Garden, at the other end of Main Street, is defined mostly by its interactive water park feature and also serves as a haven for dog owners. Activity is very contained.

Both parks operate under the auspice of good design as a driver of success. Additionally, they are also regularly patrolled by a private security force and are maintained by private cleaning crews in order to perpetuate the goodness of the design. Though the parks are nice, there is something quaint about them — the prospect of stumbling onto something unexpected is not expected, and raises the question of how to allow an organic “place,” which ultimately defines good public spaces, to evolve.

Dallas has a multitude of highly designed park spaces, from Philip Johnson’s Thanks-Giving Square, to I.M. Pei’s City Hall Plaza, to the AT&T Performing Arts Center, a $354 million multi-venue center that opened in 2009 and is catty-corner to the Klyde Warren Park. While City Hall Plaza continues to mostly sit as a dead space, Thanksgiving Square and AT&T Performing Arts Center have experienced resurgences in activity thanks to food trucks. Holly Whyte’s wisdom strikes again: “If you want to seed a place with activity, put out food. Food attracts people who attract more people.” Additionally, the Performing Arts Center is becoming a destination for outdoor music events, shows and movies, and is attracting people because of the promise of culture. People have gotten used to the idea of being there every day.

The success of Klyde Warren will not only reflect in how the area develops around it, but in its own ability as a placemaker. Gil Penalosa, executive director of Toronto-based non-profit 8-80 Cities, gave a presentation to Dallas City Hall in April about the importance of a network of green spaces, long linear parks and accessibility for people ages 8 to 80. In May, New York City Planning Commissioner Amanda Burden, a student of Holly Whyte and shepherd of the High Line, spoke at the Nasher Sculpture Center about the importance of organic growth through simple placemaking elements, such as moveable tables and chairs, food options and entertainment.

Dallas continues to see a shift in placemaking at the local level as well, especially with the success of Team Better Block to transform a neighborhood block for a weekend as a pedestrian-friendly destination, the emergence of outdoor markets and trend toward community- led placemaking projects.
           
 This weekend’s celebration will mark another triumph in Dallas’s history for re-thinking the urban landscape, though the promise of connectivity will remain a question long after the opening. Learning from the success of recent public spaces around the city, the focus will have to shift from events to the everyday — from programmed fun to un-programmed spontaneity, which allows the community to shape its environment and take ownership of the space. It will also have to create a familiarity and the expectation of culture. It will have to become a “place” for connectivity.

Patrick McDonnell is the co-founder of Revolutionary Pants, an urban laboratory for creating communities and reimagining the human habitat, and a member of the 2012 Next American Vanguard.