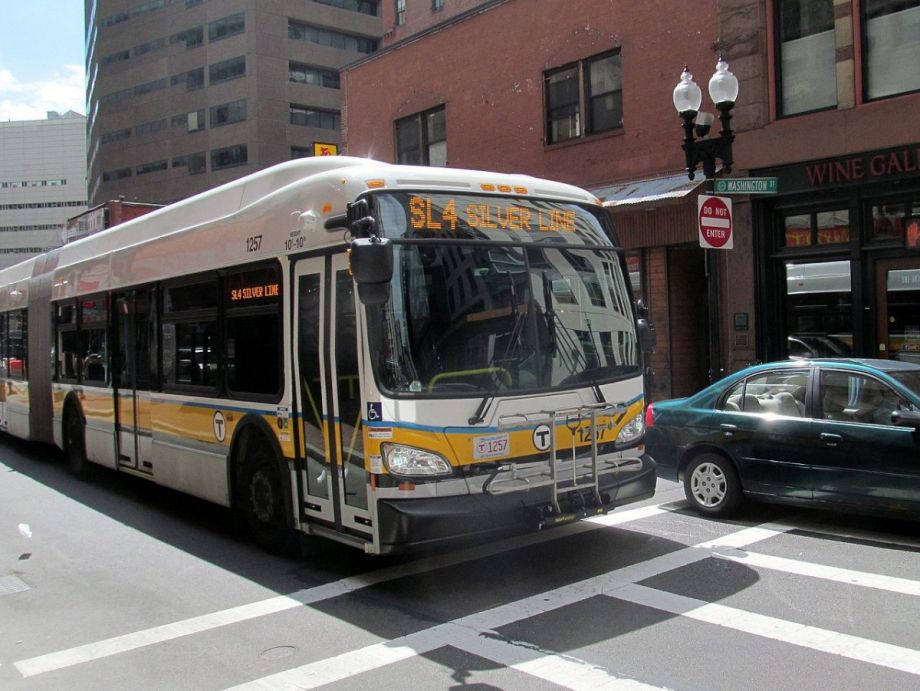 Among a certain set of transportation planners and advocates in Boston, bus rapid transit (BRT) is the hottest topic these days. As is often the case with fans of the mode, they tout BRT’s potential to mimic the best qualities of light rail at a fraction of the cost. Earlier this year, Bostonians got a glimpse of what their transit might look like if these supporters get their way, when the Massachusetts Bay Transportation Authority (MBTA) ran a two-week pilot project allowing all-door boarding on the Silver Line bus.

Last week, the Barr Foundation, which is Massachusetts’ biggest privately funded philanthropy and a sponsor of an initiative called BostonBRT, released data about speed improvements and rider satisfaction collected during the experiment.

MBTA ran the all-door boarding pilot from May 24 to June 6. Though it can’t be called BRT, the Silver Line already has some BRT elements, such as signal prioritization and bus-only lanes on part of the route.

Unsurprisingly, all-door boarding reduced boarding time and increased on-time bus departures. According to the Barr Foundation, all-door boardings were about twice as fast as front door only, with 30 people boarding the bus in the same amount of time it takes 10 to 14 people to board on a typical day. Surveys of 900 riders found that most people were happier with their bus riding experience during the pilot. The report says 65 percent of respondents said their trip was faster during the pilot and 70 percent said all-door boarding made them more likely to ride the Silver Line again.

“Since the Silver Line already has many of the BRT elements, we knew we weren’t going to get such a huge decrease in travel time. But it was interesting to see that riders experienced a better commute with all-door boarding. Part of ensuring we get more people on buses is making sure they don’t feel like cattle being herded one by one,” says Mary Skelton Roberts, co-director of the Barr Foundation’s climate program.

The Barr Foundation has helped fund several BRT studies in the Boston area and granted MBTA funds to offset the cost of allowing riders to board at the rear of the Silver Line without paying during the pilot.

MBTA already has plans to incorporate all-door boarding on all buses, eventually. The Automated Fare Collection 2.0 plan, which the agency will roll out in 2020, will eliminate cash payments and introduce pre-boarding payment.

“The success of the Silver Line pilot is an opportunity to say, ‘can we accelerate AFC 2.0?’ Getting the Silver Line going before 2020 would be fabulous,” says Skelton Roberts.

BRT advocates say the pilot helps them make the case for the mode in general too.

“It piqued the public’s interest. It’s hard for people to get their heads around changing their bus experience,” says Stacy Thompson, executive director of LivableStreets. “People picked up all-door boarding so quickly [during the pilot]. This proves we can make these changes and people will adopt them.”

Last fall, LivableStreets launched a campaign aimed at making the public see buses as “sexy,” Thompson says. “We want to change the public perception of what the bus is and what it can do for them. Consistency and reliability are important for your relationship to your transit system. You can fall in love with your bus.”

“Systemic racism is deeply ingrained in the history in Boston and many other cities across the country. When the T was built, it meant that rail lines weren’t extended to communities of color. You can just see it looking at maps of Roxbury, Dorchester, Mattapan and others,” says Thompson.

Even with MBTA and the city of Boston’s intentions to expand BRT, a robust network will require broader regional participation. The greater Boston area is made up of dozens of municipalities.

“We need municipalities on board, too,” Skelton Roberts says. “They’re in charge of signal prioritization and bus-only lanes and enforcement. They’re really important for BRT success.”

The city of Everett, a suburb immediately north of Boston, is ahead of the curve. Last December, it installed a pop-up bus lane overnight, and removed on-street parking in the process. Though there were some grumblings about the lost parking, the city dubbed the bus prioritization a success and made the bus-lane permanent.