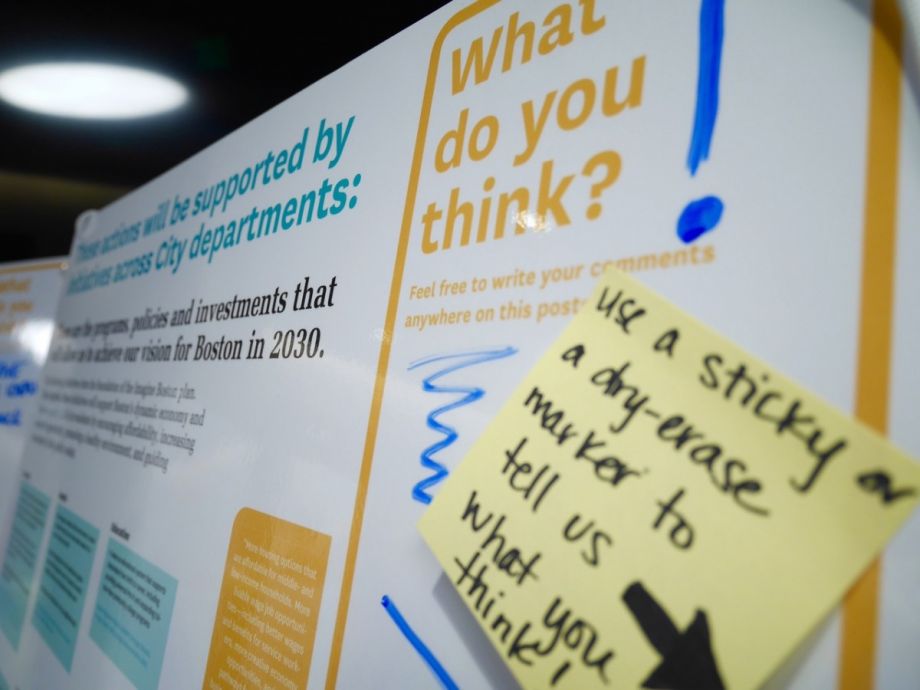 Go Boston 2030 was released by the city at a public event Tuesday. (Photo by Sandra Larson)

The city of Boston this week released its vision for a transportation future in which neighborhoods are interconnected by multiple modes of travel, streets are substantially safer and Bostonians’ commute times are shorter.

Two years in the making, including a multiphased community engagement process, the Go Boston 2030 Vision and Action Plan presents 58 policy and project action items, each accompanied by a map and details about the issues it addresses, its implementation and best practice examples from other cities.

Beginning in the snow-pummeled winter of 2015, Go Boston 2030’s early outreach captured 5,000 questions (which, for inquiring minds, are all listed here) via an online portal and a Question Truck that traveled to neighborhoods offering pens, sticky notes and hot drinks. Then, a two-day public Visioning Lab led to a draft that laid out guiding principles — equity, economic development and climate responsiveness — and primary targets like ensuring non-car transit options within a 10-minute walk of every Boston household by 2030. In the final phase, a series of idea roundtables and “ideas on the street” pop-ups drew nearly 4,000 project and policy ideas from residents across the city.

Go Boston 2030 is a 15-year plan, but the process has already sparked some early actions. A pilot program is testing variably priced parking in high-demand areas of Seaport and Back Bay, for instance, and the city’s default speed limit was reduced from 30 mph to 25 mph recently as part of the Vision Zero campaign Mayor Marty Walsh launched in 2015.

Rob DeLeo, a professor of public policy at Bentley University whose research focuses on preparedness policymaking, has cautious enthusiasm for the new plan. The climate piece is essential and the extensive citizen engagement striking, he says, but pushing the long-term plans forward won’t be easy.

“We’re asking politicians to invest in things that may not be visible for 10, 20, even 50 years. This is difficult,” DeLeo says. “[But] the Go Boston visioning process is a great way to overcome barriers to incentivizing policymakers to engage in long-term planning. It creates a feedback loop where citizens are asking policymakers to make long-term policies. Unless voters ask, it’s not going to happen.”

The vision was unveiled with mild fanfare Tuesday at the Boston Public Library’s main branch in Copley Square, with an official announcement by Walsh and an interactive exhibit illustrating the action plan items. Outside the library, Go Boston representatives educated visitors on the features of a “mobility microhub,” a key location with access to bus, subway, bicycle sharing, secure bicycle parking and car-sharing as well as nearby community resources and businesses. Copley is an exemplary mobility hub already; creating more of these in neighborhoods outside the city’s center is part of the Go Boston 2030 plan.

Transportation leaders from Boston, D.C., Seattle and Pittsburgh participated in a panel discussion, parts of which were live tweeted and captured on video by local transportation advocacy groups LivableStreets and TransitMatters.

Obvious questions loom: Can the city pay for these projects? Can the excitement of the vision be sustained through mayoral election cycles and the nitty-gritty implementation tasks?

“Seeing all these transportation needs acknowledged and folded into a singular vision is great,” says TransitMatters co-founder and president Marc Ebuña. “[But] we wish the city were more willing to broach the subject of paying for it. We would be behind the city all the way if they stuck their neck out.”

City officials point to several funding strategies, touting the city’s five-year $700 million capital plan that includes investment in Vision Zero, infrastructure maintenance and repairs, multimodal street plans, and smart signaling and microhubs for speedier travel. Additionally, the city will seek greater contributions from developers and work with neighboring towns on cost-effective regional networks. In enlisting state support for Fairmount Line improvements and other transit projects, Walsh, a former state legislator, will make the case that robust transportation is critical to the region’s economic vitality and the state’s tax base.

While public participation in the visioning may indicate a level of buy-in from city residents, voters can be fickle when it comes to allocating dollars and tearing up their streets unless the benefits remain crystal clear.

“The best way to keep engagement going is for us to deliver,” Boston Chief of Streets Chris Osgood said during the panel discussion. “That is the work in front of us.”