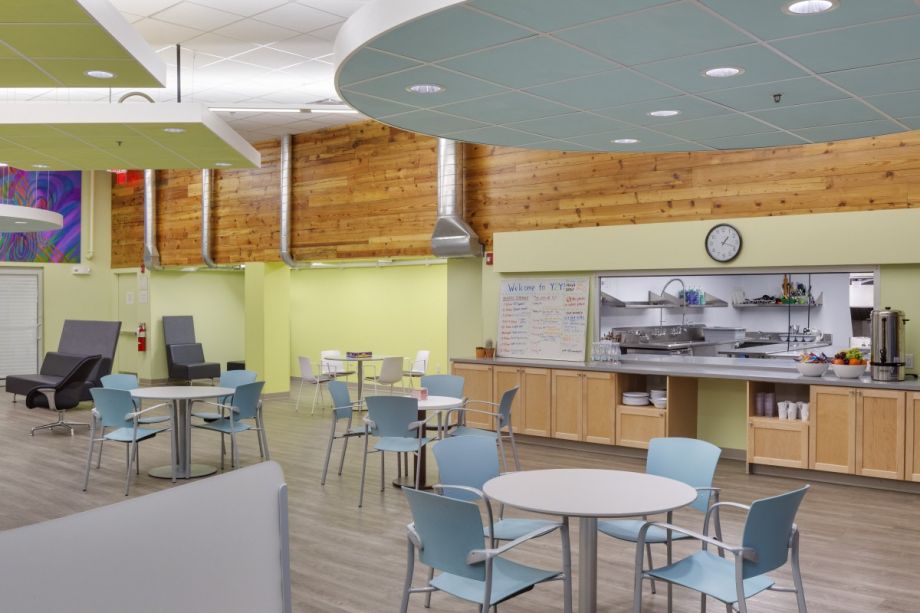 The Y2Y facility in Harvard Square was the first student-run facility for homeless youth in the country. Now, the model is expanding. (Greg Premru/Studio G Architects)

“We had dozens of different communities across the country reaching out to us, wanting to replicate the model,” recalls Rosenkrantz. “Obviously we were really flattered and intrigued, but we were so pressed to get Y2Y Harvard Square up and running that we asked people to reach back out to us in a year. We were not there yet.”

Greenberg and Rosenkrantz spent that first 18 months of operations fine tuning their model of a wraparound overnight program, operated primarily by Harvard student volunteers, offering 27 beds for young people between the ages of 18 and 24. At the same time, they increasingly considered how the work in Harvard Square could benefit others. “We defined three key criteria,” says Greenberg. “Where is there a need for this resource, a need that folks in the community have defined? The second was finding community partners that didn’t want any model for addressing youth homelessness, but this model. The third criteria was if there were students ready to walk the walk.”

That criteria aligned in New Haven, Connecticut, both with students and the youth services provider Youth Continuum. The organization partnered with Y2Y Network at the end of 2017 and the team has gone on to develop the first expansion of the Y2Y model. They hope to open a 20-bed youth facility with wraparound services — operated by students from nearby colleges like Yale University in partnership with Youth Continuum’s staff — at the end of 2021.

Since its 1966 founding, Youth Continuum has increasingly focused on providing services and housing for homeless youth and now operates New Haven’s only 12 youth-specific units of crisis housing, leaving an average nightly wait-list of roughly 15 young adults.

There are significant challenges to addressing youth homelessness, according to Youth Continuum chief executive officer Paul Kosowsky. “To be homeless under the definition of [the Department of Housing and Urban Development], you have to either be living in an emergency shelter or a place not meant for human habitation,” he says. “Most young people do neither of those. They prefer not to go to adult shelters — they feel uncomfortable and out of place — and they generally don’t stay on the street, they couchsurf.”

A dedicated overnight program like Y2Y would allow homeless young people to be eligible for housing and HUD assistance, Kosowsky realized when he first heard about Y2Y Harvard Square. He was also drawn to working with university students. “It’s an infusion of resources, energy and creativity,” he says.

There was equal interest building at Yale University. Starting in 2016, students with the Yale Hunger and Homelessness Action Project conducted an extensive community service mapping project which identified Y2Y and Youth Continuum as potential partners. As soon as Y2Y was ready to expand, the three partners began collaborating on opening an overnight, student-run youth program in New Haven.

The work attracted Yale students like Lauryn Phinney, a junior majoring in urban studies, and Nicky Brussel Faria, a junior studying the history of science, medicine and public health. “In classes I was interested in architecture, city planning and issues of equity, and was interested in getting involved in a locally-based project,” says Phinney. “The more I read about Y2Y and youth homelessness in general, I was drawn to the youth-focused model and how it is driven by young people on all sides.”

The facility also provides a framework for students and the youth experiencing homelessness to develop programming together. In 2019, 199 young adults experiencing homelessness stayed at Y2Y Harvard Square, with guests and students planning outings like kayaking and ice skating. Y2Y also launched programming like the Computer Club and Art Workshops, as well as an integrated clinic with Boston Health Care for the Homeless.

In New Haven, collaboration between students and youth experiencing homelessness started early, including the Youth Advisory Board comprised of young people with lived experience. There’s also a program model workstream with three focuses for students: policy, staffing model and service model. In each focus, teams think critically about integration of youth voice.

The team launched a pilot in the fall of 2018 in which students began volunteering with Youth Continuum’s existing youth program. One challenge is developing a model accommodating college student’s schedules, says Kosowsky. “We want to operate 24/7, 365, so we want our professional staff engaged so that even if there’s no students or volunteers we can operate the program as if it were fully functional.”

Finding committed students is another crucial part of the work. “We need to grow the number of students involved, so they can take on a leadership role in the program,” Kosowsky says. “It takes a lot of training, support and supervision to get them up to that point.” Beyond Yale, the team has brought in university students from nearby colleges like University of New Haven, Quinnipiac and Southern Connecticut State University.

While growing the student leadership, Youth Continuum received approval this past summer from the New Haven City Planning Commission for its proposed expansion of its long-standing daytime drop-in center. The renovated drop-in center will become a 24-hour comprehensive service space — the first of its kind for young adults in the state of Connecticut — integrating Youth Continuum’s daytime programming with Y2Y’s gender-inclusive overnight program. Collaborative partnerships will fill in for employment opportunities, medical and mental healthcare and other services.

Collaborations are already underway, according to Brussel Faria, who is involved with developing partnerships. “The Yale Law students are currently working to build an SSDI [Social Security Disability Insurance] and SSI [Supplemental Security Income] workshop for the current Youth Continuum shelter,” she says. “But I think the opportunities for collaboration extend beyond the confines of Yale.”

If all goes according to plan, the renovated 20-bed facility will start construction this summer and open by the end of 2021.

The work tends to have a profound effect on the young people involved. 95 percent of student staff at Y2Y Harvard Square say the experience made them more likely to pursue public-service work post-graduation.

At Yale, the impact is setting in. The work has deeply shaped Phinney and Brussel Faria’s college experience. “As a history of science, medicine and public health major, I learn about the treatment of vulnerable groups quite regularly in an academic setting,” says Brussel Faria. “To have a firsthand account has been really powerful. It’s had a huge impact on me as a person and how I go through my life at Yale.”