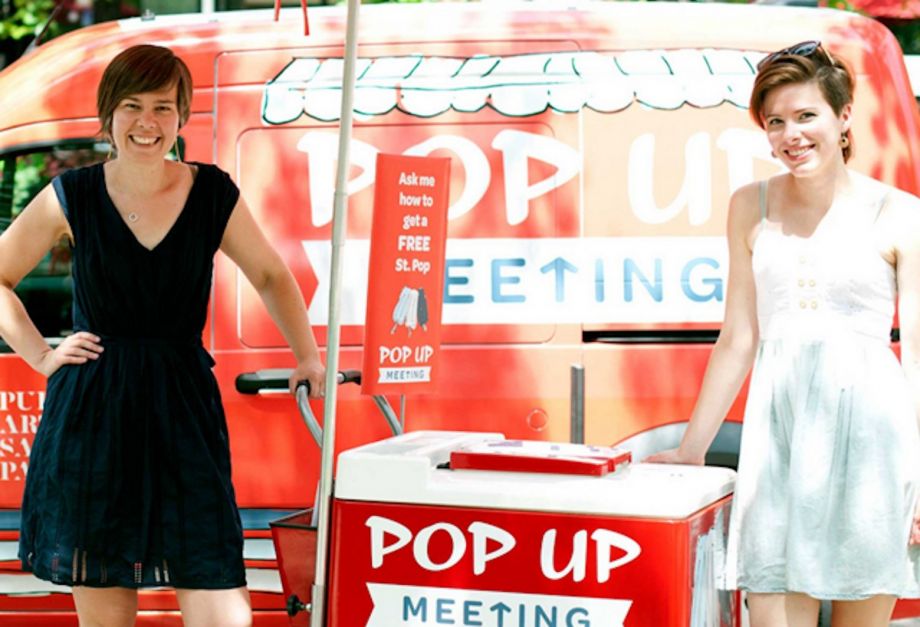 The city also held pop-up meetings out of a van parked at busy intersections — and spoke to over a thousand people, most of whom had never before been to a city meeting.

Pop Up Meeting is the brainchild of Amanda Lovelee, who’s currently a “city artist” in St. Paul. The City Artist program, run by nonprofit Public Art St. Paul, pays the salary of an artist to be embedded at City Hall, and itself is a unique initiative. Over the last decade, the program has put poetry into sidewalks, turned stop signs into art and produced a sing-along on Election Day.

Lovelee was working with a landscape architect to design a more compelling presentation on a playground redesign. “I was like, ‘I’m going to blow their socks off,’” Lovelee says. “So we have our first meeting, and it’s in the basement of a nursing home and it’s at 7 p.m. And I think, like, seven or eight people showed up.” Thus was Lovelee’s introduction to the world of public meeting participation — or non-participation, as is often the case.

“I started to think about my own neighborhood and if I had attended any meetings. I hadn’t.” She learned there are a lot of assumptions that planners make when they schedule meetings. “It’s at 7 p.m. … [the assumption is] you work a 9-5, you have childcare, you have transportation.” Lovelee also says she learned that planners want to hear from people. “The city really listened to people when people showed up, but when nobody shows up, [the few people who do] become the voice of that community.”

Lovelee went to the head of the city’s public works and asked for a spare vehicle to turn into what she’d dub a Pop Up Meeting.

“I went to the public works garage and the guy tried to pawn off a snowplow on me,” she says, laughing. Instead, though, she got a “cute little electric vehicle,” a Ford Transit van. She decorated the truck and took it to parks, busy intersections and festivals. The pitch: Take a short survey, get a free ice pop. (Those treats, by the way, are made by a local business — with a special mint lemonade flavor designed specifically for the project. “[Recently] I was at an event and everyone was eating [them]. In November in Minnesota,” Lovelee says.)

The artist didn’t go it alone: Planners and city officials would come with her to the pop-up meeting sites. And even Mayor Chris Coleman got involved, handing out surveys and frozen treats.

“You’re out in the neighborhoods, and [you’re talking with] folks that aren’t normally going to be at the chamber of commerce breakfast,” Coleman says.

Bringing meetings to the people isn’t just about making sure more voices are heard, he says, but different voices. “There are people who have easy access to City Hall. They’re comfortable dealing with power. Who we lose are people of color, lower-income folks, immigrant communities. This is a chance … to open up the doors of conversation to people who don’t feel like they’ve been included so far.”

Coleman says that when he talked to citizens to learn about their budget priorities, it didn’t really matter what demographic a person fell into, their priorities were more or less the same: public safety, great public places and education. “It’s not that we wouldn’t hear it from the folks that feel they have greater access to City Hall,” he says, “but there’s a certain immediacy to it when you’re hearing it from people who do not feel they are getting the same level of services.”

When Lovelee went out to chat with people about specific projects, though, she did hear different things at the truck than she did in meetings.

The city is in the middle of redeveloping a former Ford plant on prime waterfront property in the Highland Park neighborhood. “We asked [at meetings], do you want a skate park? And nobody said yes, because everyone was over the age of 50. But there are young people who live in Highland Park too.” She says her goal is to determine “what voice is missing from this [discussion] and how can we bring this voice into the process?”

During Summer 2015, more than 1,000 people filled out a survey at one of the pop-ups. About 70 percent had never been to a city meeting before.

“I think we learned this is needed,” Lovelee says. “We need alternative ways to engage residents in the civic process, and if we come up with them, people will participate.”

She’s planning to run the program again next summer, with two interns slowly taking it over. And the city — eventually — wants to expand the program with more trucks in more neighborhoods. (Though since the original prototype was paid for by Public Art St. Paul, the city would have to eventually find a way to pay for the program.) Maybe program runners could be equipped with iPads to translate surveys into any language on the fly, Lovelee says.

“It was an amazing summer to traverse the city,” she says. “It’s very different from standing in front of people with a PowerPoint.”