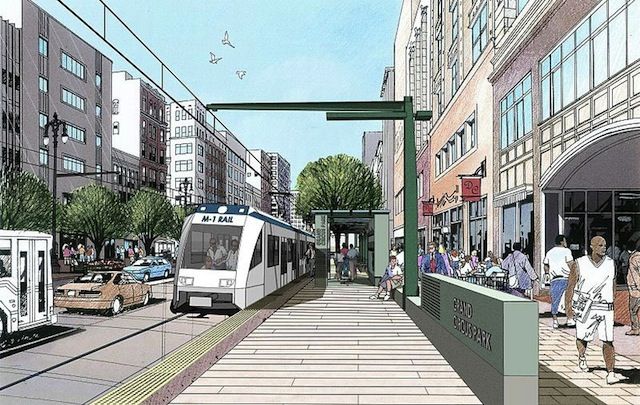 A rendering of the M1 rail line in Detroit, which will connect with the proposed commuter rail.

For years, Detroit was the only major U.S. city without a regional transit authority. Mostly this was because of ugly racial politics that broke down negotiations a breathtaking 23 times since 1970. That changed in April, when the Southeast Michigan Regional Transit Authority held its first meeting.

On Friday, this newborn RTA unveiled refurbished train cars for its first proposed line running from Ann Arbor, Mich. to downtown Detroit. RTA hopes the line, which will also connect to Detroit Metro Airport, will be up and running in three years.

This is a big deal. Look at every other American metropolis — Chicago, Boston, New York, the list goes on — and they all have some sort of regional transit. Detroit has freeways.

There are the obvious perks for residents in Ypsilanti, Dearborn, Ann Arbor and the other various cities across the line, like taking the train to a ballgame or visiting Detroit’s historic Eastern Market on a Saturday afternoon. But I’m more interested in how it might lure people to take jobs in Detroit, and allow Detroiters access to jobs outside of the city — jobs that have until now been virtually inaccessible to anyone without a car. Hello economic mobility!

Southeast Michigan Council of Governments executive director Paul Tait told AnnArbor.com that the Michigan Department of Transportation (MDOT) has “secured hundreds of millions of federal dollars to do some major track upgrades that will make not only Amtrak function better, but also Ann Arbor-to-Detroit commuter rail.”

That’s always the sticking point with these things, isn’t it: How can we pay for this? I talked to Carmine Palombo at the Council of Governments, who said that his group doesn’t have an exact figure right now, but that the operating costs would be a combination of local and MDOT funds. There are hopes to run some special service later this year — for the Thanksgiving Day parade or a football game — to gauge ridership interest and get a better idea of what the costs might be. Money from the Federal Transit Administration helped pay to refurbish the cars.