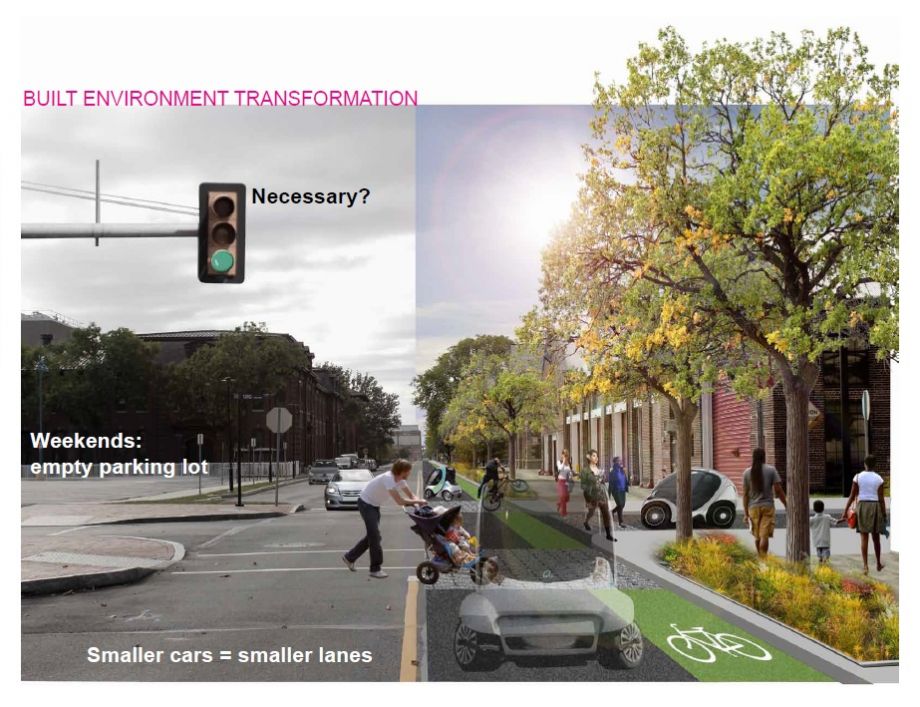 A rendering from the University of Pennsylvania team, AutoCivitas.

Each year, the Philadelphia Center for Architecture hosts a design competition for student teams from schools all over the country. The idea is to take a certain concept — for the previous two years, the focus was on transportation corridors — and see how these budding architects would apply it to areas of Philly if time and resources permitted. Nothing gets built in the end, but some of the more imaginative ideas could go into local planners’ arsenals for the future.

This time around, the Ed Bacon Student Design Competition (so named for the legendary Philadelphia planning chief) centered on driverless cars. Much as Jonathan Geeting asked in this week’s Forefront story, the Center for Architecture wanted to know what this nascent autonomous technology could mean for the urban form.

Five teams won the contest. Four of them decided to take on the Philadelphia Navy Yard, a 1,200-acre swath at the southern tip of South Philly where the city expects massive amounts of mixed-use development to happen in the near future. Another winning team set its sights on Callowhill, a formerly industrial neighborhood just north of Center City and known among planning types for the Reading Viaduct.

See a selection of their renderings in the slideshow below:

The winning teams represent Cornell University, the University of Texas at Arlington and Philly’s own University of Pennsylvania. They will be honored, along with former Philadelphia mayor Ed Rendell, at an awards ceremony on Tuesday.

Disclosure: Next City Executive Director Diana Lind is the outgoing chair of the Ed Bacon Foundation committee at the Center for Architecture.