Silicon Valley has given us social media, the iPhone, Elon Musk (and a bunch of not-so-great things, too), but when it comes to the region’s car-dependent transportation network, “innovation” isn’t exactly the first word to come to mind. The roads are clogged, transit has been crippled by years of sprawl and bike infrastructure is fragmented and inefficient.

Sounds like a problem. But in Silicon Valley, problems don’t exist, right? Only opportunities. Thus, in true tech form, a new report lays out a detailed vision for improving the region’s bike network — fixing the “discontinuities in the bikeway network that compromise the user experience.” The report, Silicon Valley Bike Vision, comes from a number of organizations and heavy-hitters: Joint Venture Silicon Valley, the Silicon Valley Bicycle Coalition and Nelson\Nygaard Consulting Associates, with “generous” funding from Google and additional funding from Facebook and Stanford.

It lays out some of the main obstacles to a more seamless cycling experience. Only 1.7 percent of Silicon Valley residents bike to work, which is still more than the national average, but, the report argues, far less than the number could be, given the region’s mild climate and flat topography. After all, Davis and Mountain View aren’t that far apart.

But one of the problems is, actually, Silicon Valley’s geography. It’s not a single entity, but a collection of cities across two counties, each with its own government. And though some progress has been made in inter-jurisdictional partnerships around bike infrastructure (the report points to the “Managers Mobility Partnership” with participation from Redwood City, Menlo Park, Palo Alto, Mountain View and Stanford) many of the intersections with a high concentration of bicycle-involved collisions are on the borders between cities.

“The existing networks of low-stress bikeways in Silicon Valley are disjointed by high-stress barriers, including intersections, high-speed arterials, and freeway and expressway overcrossings, leaving islands of low-stress bikeways as stranded investments,” the report states. “Oftentimes, like the patterns of collisions, these barriers occur at city boundaries where bicycle network improvements would require inter-jurisdictional, county or state collaboration.” 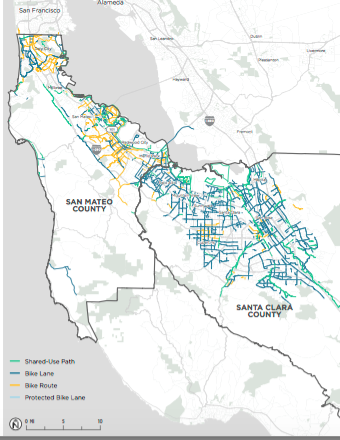 The report makes a number of suggestions for cities that want to help improve the region’s bike network, including fostering partnerships, hiring staffers, updating bicycle master plans and adopting Vision Zero-like goals. One particularly interesting one involves pursuing grant funding. The report states that grant funding and planning efforts that “are regional rather than city-specific would unlock stranded investments in Silicon Valley and create a superior bicycle network.” It proposes modifying grant criteria to prioritize connecting the various “low-stress” sections of the area’s network.

Of course, many of the suggested improvements will require money, and beyond the mention of grants and the acknowledgment that upgrading the network will require funding, the report isn’t too detailed on how that financing should be obtained. But it reads more like a first step, with the policy suggestions to be used by Joint Venture Silicon Valley and Silicon Valley Bicycle Coalition as a “framework” moving forward.

It’s perhaps significant, on that front, that Google provided such generous funding for the report itself.

“Creating a connected, stress-free network of bike lanes is a key part of Google’s vision for the future of transportation,” Google’s transportation planning program manager, Jeral Poskey, said, according to a release about the report.

As Next City has previously covered, the tech giant has offered infrastructure upgrades like parks and bike lanes to the city of Mountain View, where the company headquarters is located. And it’s not alone.

“Where cities once ran on tax dollars, selective corporate philanthropy has emerged as a significant driving force of urban policy,” Susie Cagle wrote in 2015. “Tech companies are reengineering city streets, building city police stations and parks, and even helping cities cover the salaries of the public servants they rely on.”

Perhaps, for better or worse, Silicon Valley’s bike network will get the cash it needs from the companies driving its economy.