Should Transit Be Free During the Seattle Squeeze? – Next City

Should Transit Be Free During the Seattle Squeeze? 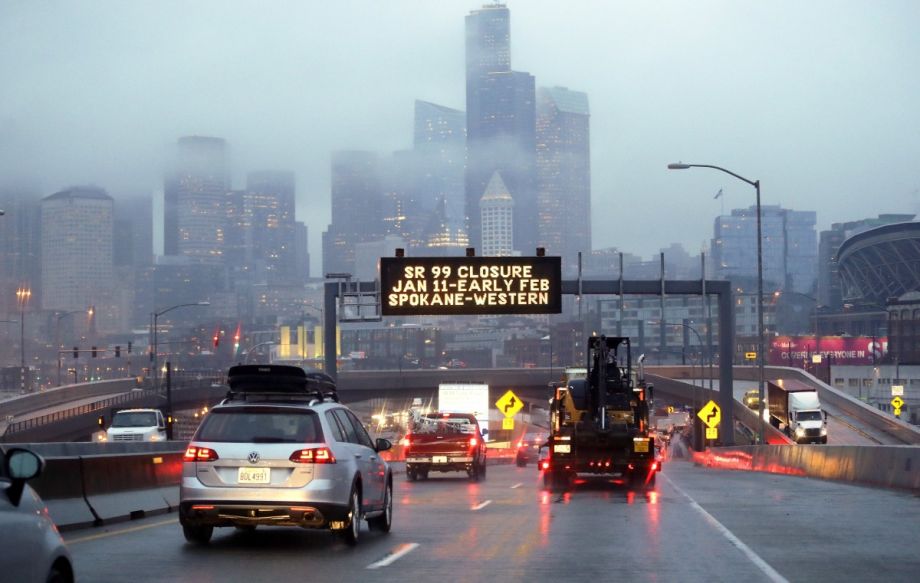 In this photo taken Thursday, Jan. 3, 2019, rush hour northbound Highway 99 traffic backs-up while heading toward the Alaskan Way Viaduct just ahead as a sign overhead advises of an upcoming closure of the roadway in Seattle. The double-decker highway along Seattle's waterfront is set to shut down for good Friday, Jan. 11, ushering in what officials say will be one of the most painful traffic periods in the city's history. The 65-year-old viaduct is being replaced by a four-lane Highway 99 tunnel, scheduled to open several weeks after the viaduct's closure. (AP Photo/Elaine Thompson)

For nearly four decades until September 2012, bus riders in downtown Seattle hopped on and off without fishing for change. The “Ride Free Area,” originally christened the “Magic Carpet,” debuted in 1973 as a way to jumpstart downtown life at a time when the Emerald City was considerably less glistening than the tech-fueled boomtown it is today.

The free downtown ride was a casualty of the Great Recession, but now a city councilmember is calling for a comeback to help out shift workers during the “Seattle Squeeze” that starts on Friday when the Alaskan Way Viaduct, an elevated waterfront highway, closes permanently.

Known among city officials as the “Period of Maximum Constraint,” the Seattle Squeeze refers more broadly to the two years from the viaduct closure until a light rail extension opens in North Seattle. In between these two bookends, downtown commuters must contend with several major infrastructure projects, from a convention center doubling in size to a possible streetcar extension.

Most distressingly, the multi-billion tunnel dug by Bertha, the world’s longest tunnel boring machine — which got stuck underground for several years — will not open for another three weeks after the closure of the viaduct it’s replacing. That means some 90,000 daily cars may disperse onto already congested I-5 or other north-south routes through Seattle for the next few weeks. Warnings of a traffic nightmare have led to another nickname for this particular upcoming stretch — #Viadoom — with local officials urging as many people as possible to work from home, change their commute time, or take time off.

The doomsday scenario prompted Councilmember Kshama Sawant to issue an appeal to the city and county, which runs the main regional bus system, to make transit free during #Viadoom in order to accommodate shift workers like nurses, cleaners, and cooks who don’t have the same teleworking and flexible hour luxuries as some office workers.

“Despite words to the contrary, the burden of navigating these traffic jams falls overwhelmingly on the backs of working people who have no other option,” Sawant wrote in a blog post. “To mitigate this, the City and County should make public transit a more convenient alternative for regular people, many of whom have been gentrified out of their neighborhoods and far from their workplaces.”

Sawant argued that temporarily dropping fare payment for three weeks would cost an estimated $10 million. She hopes that such a proposal would serve as a trial run for fare-free transit citywide on a permanent basis — a small but growing global trend.

The proposal is unlikely to become a reality.

“Ending revenue during the viaduct closure will not increase transit capacity during commute times and would decrease Metro’s ability to keep up with the growing demand for reliable transit,” says Alex Fryer, a spokesperson for the King County executive.

“Peak commute ridership demand is currently very high, and changing fare policy during the three-week viaduct closure wasn’t considered an effective way to reduce travel demand when half of downtown commuters already are on transit, many of whom have the benefit of employer-provided bus passes,” he says.

Fryer pointed to a legal hurdle for free transit: King County Metro must recover one-quarter of operating costs via the farebox. That’s not to say the city and county aren’t helping. The ORCA Lift reduced fare card gives a discount to those earning up to double the poverty line. Last year, Mayor Jenny Durkan successfully implemented free ORCA cards for high school students.

While Sawant’s proposal details the environmental and social benefits of making transit more accessible, the fare-free proposal comes across as a guise to resurrect the big business tax she championed last year that passed — and then was quickly repealed — by the city council.

“The region’s transit needs should be fully funded with big business taxes, with expansion of routes and frequency of bus service to make it viable for working families to not have to regularly depend on cars,” she wrote. (Sawant’s office did not respond to a request for comment.)

City officials, meanwhile, are more focused on the nuts and bolts of surviving #Viadoom and mitigating the worst of the Seattle Squeeze. Mayor Jenny Durkan hired a retired Air Force general to oversee the city’s response. First responders have plans in place — including last-resort helicopters — they are describing as “planning sort of for Armageddon.”

Above all, avoiding commuter trips during peak hours is being pitched as a civic duty.

“Although we understand that everyone will not be able to participate in alternative work arrangements, we urge the people who can be flexible to use that flexibility during this time to make room for our neighbors who don’t have a choice,” says Kamaria Hightower, a mayoral spokesperson. The city, Seattle’s third largest employer, instituted flexible scheduling at all levels, including cleaning staff, in order to stagger mass transit use.

With social media offering anecdotal evidence of #Viadoom trial runs packing park and rides even earlier than usual, one Seattlite already offered to give up his seat.

“Seattlelites: To counter the impending #viadoom starting this Friday, I’m gonna be walking in to work. Not huge news I realize - but if you are able to do the same, pls join me. One less body on transit for those who can’t,” Jason Wick tweeted.