Should Tokyo Build Methane-Powered Cow Farms in the Sky? 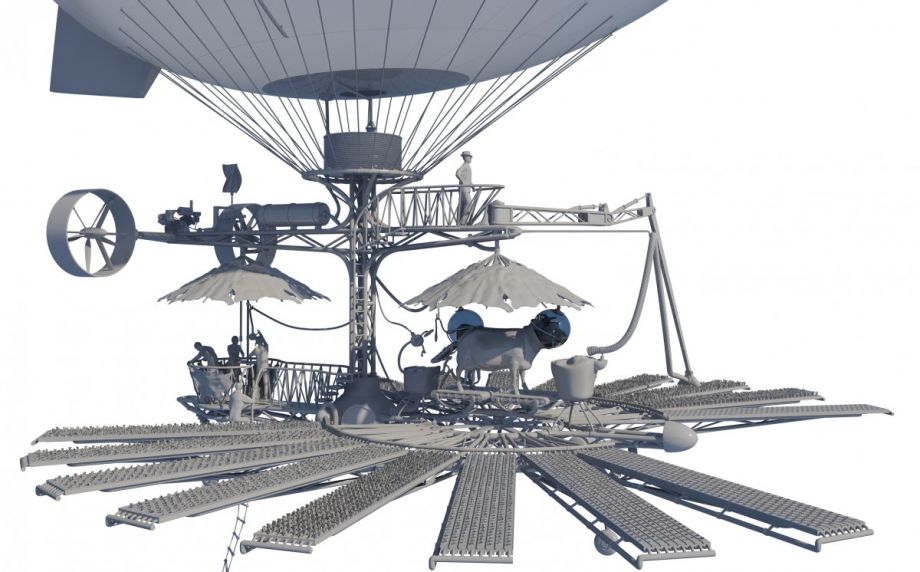 A rendering of one man’s vision for urban agriculture in Japan.

After decades of rampant development, Tokyo is slowly upturning its layers of concrete and re-greening itself. The Tokyo Metropolitan Government is over halfway through a 10-year project to return the metropolis to a version of its former self, back when it was a city carefully constructed around its waterways and agricultural land. This green shift involves growing a huge forest on a man-made island in Tokyo Bay, planting trees beside densely networked city roads – and launching methane-powered farms that float in the sky, populated with cows wearing virtual-reality goggles.

Well, not that last one just yet. But this mad vision of a future in which farms float in the clouds above Tokyo is, according to Stephen Mushin, not entirely outrageous.

Mushin is an ecological designer who, with mechanical engineer Neil Faragher, modeled his floating cowship with a 3-D printer at a 1/10 scale as part of an exhibition in Tokyo featuring his “thought experiments” in urban agriculture. The exhibition was commissioned by Spiral, a Japan-based arts production organization, and shown throughout August.

Mushin’s other ideas for farming in the world’s largest city, shown as drawings in the exhibition, are all equally bonkers: yakitori bars clinging to the outside of high-rises, where the chickens are raised and killed on site; mini-meadows attached to car roofs providing flowers for bee hives that are affixed to traffic lights; and crow-shaped drones that 3-D print nests for real birds. But the Kiwi artist insists these dreamscapes are “no more mad than the world we’re living in today.” Mushin is one of a number of creative thinkers who are taking improbably fantastic resiliency solutions and clothing them in vaguely scientific possibility. Another example is Dutch artist Arne Hendriks with his Incredible Shrinking Man project, which explores ways of shrinking humans to an average height of 50 centimeters to reduce global consumption.

Farms in Tokyo produce enough food to feed less than one million of the city’s residents, according to a 2010 survey by the Ministry of Agriculture, Forestry and Fisheries. Data suggest, however, that 85 percent of the city’s residents want urban farmland to give them access to fresh foods and green space. Cowships might be a fantastical solution, but Mushin says that’s beside the point. “There’s nothing wrong with these ideas. The only problem is that there is a huge lack of imagination and interest,” he says. Based on calculations he made with Faragher, Mushin believes that cowships are not just “thought experiments,” but can be successfully constructed. The pair are currently working on a full-scale prototype of a cowship, which they plan to launch in New Zealand, Mushin’s home country. “Humans can change, it’s just that we’re not inspired to change. No one cares about (energy) efficient lightbulbs – it’s got to be something you can be delighted by,” says Mushin.

Mushin’s idea is to put cows in the sky and use their expelled methane as airship fuel. One cow produces roughly 0.28 cubic meters of methane a day from belching (95 percent) and flatulence (five percent), plus another 1.5 cubic meters of methane from manure. Based on these estimates Mushin calculated that it takes about 654 days for your average cow to float itself with its own collected methane. But thousands of cows together could produce enough methane to float larger objects, he says, like a hydroponic farm. These airborne farms would keep environmentally dangerous methane gasses contained, feed the resident cows (who, in dystopian fashion, Mushin has imagined hooked up to virtual-reality googles, giving them the illusion of being on solid ground), and provide transport, food and milk for residents far below. (By these estimates, Greater Tokyo would need about 81,000 cowships to provide the 3.5 million liters of milk it consumes daily.)

Mushin thinks urban farming in future Tokyo will not involve us “getting our hands dirty, digging up a carrot.” Instead, it will be “corporations that set up high-tech, dense, multi-story production systems on the edges of towns.” In 2011 there were 64 factory farms in Japan – by March, there were 165. Part of the growth is due to support from Japan’s Ministry of Economy, Trade and Industry (METI) in an effort to prove that factory farming is possible and profitable. Earlier this year Mirai Co. (literally “Future Company”) opened a factory in Chiba Prefecture, east of Tokyo, exactly as Mushin described: a high-tech, multi-story indoor farm, in this case growing 10,000 heads of lettuce per day. The crops are grown in a sealed environment using computers to control and monitor the pest-free environment, which means there’s no need for traditional chemical pesticides. The lettuce is reportedly so fresh that the moment you open the bag is the first time the lettuce has touched natural air.

Waving an enormous flag for the industrialization of agriculture, Toshiba Corp. announced in May it will also start growing lettuce and spinach in another huge factory. Unexpectedly, a designer from the power department of Toshiba’s Heavy Industry division was sent to a workshop given by Mushin in August, which was part of his “Farming Tokyo” project. According to Mushin, she “explained to everyone how important she thinks lateral thinking is for companies to remain innovative.” Mushin says he made plans with this woman — half-seriously — to pitch the idea of making a floating cowship prototype to Toshiba. “She seemed to have a lot of fun with the blue-sky thinking,” he says.

Factory farms might revolutionize urban farming in Tokyo, but to Mushin they represent a lack of imagination and an “erosion of social capital.” (Factory farming is rarely an environmentally friendly way to produce food). Building that capital up as the city turns a pale shade of green is possible, but will require wild, structurally challenging thinking, the kind represented by a floating cowship. “But really,” says Mushin, a truly sustainable future version of Tokyo “would look more like a forest than a farm.”