Saving Detroit’s Basements, One Prairie at a Time 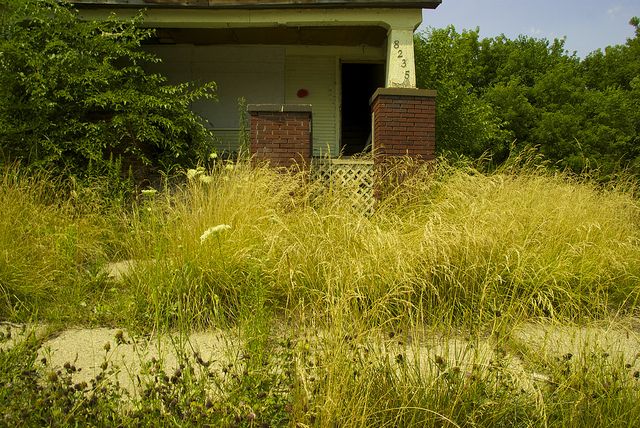 Anyone living in a Detroit home dreads a heavy rainstorm. Because the city is astonishingly flat and relatively close to sea level, severe rain can flood basements and streets, turning the commute home into a potential all-terrain excursion.

Nobody knows this better than residents of the Cody Rouge and Brightmoor neighborhoods, highlighted yesterday as part of the 2013 Bruner Loeb Forum. Water, and reconfiguring a city’s infrastructure to handle it, was one of several major themes of the day’s discussion.

Located in the heart of the Rouge River watershed, and with their extensive use of prairies and urban forests, Cody Rouge and Brightmoor provide a preview of how vacancy-laden legacy cities might look in the future. But this focus on creating green infrastructure, still a jargony term for many Detroiters, is far more than a landscape architect’s exercise in mental gymnastics — it has important ramifications for the city’s human and environmental health.

Detroit suffers from an aging pipe and sewer network that routinely cannot handle the amount of water that runs into its sewers after a heavy rain. In fact, the lack of sewer capacity causes millions of gallons of raw sewage to dump into the Rouge and Detroit Rivers every year. The Michigan Department of Environmental Quality estimates that Detroit released 456 million gallons of untreated water into rivers in 2012 alone.

During the forum I sat down with Sandra Yu, senior manager at Detroiters Working for Environmental Justice, who explained the extent of the runoff problem. Unlike many cities that separate sewer refuse and stormwater runoff, she said, Detroit’s system combines them into a single network of pipes. This water flows to a handful of combined sewage holding facilities, which keep the untreated water until one of the city’s treatment plants is ready to clean it out.

However, when a rain event (a jargony term for “storm”) occurs, the pipes overflow. Workers at the combined sewage holding facility then have a choice: Turn the valve one way and release raw sewage into the river, or turn the valve another way and flood people’s basements. Beyond residents’ ire, this has tremendous environmental and fiscal consequences. The Environmental Protection Agency heavily fines Detroit every time untreated water is released. It happened 27 times last year.

This all reinforces the importance of using Detroit’s vacant land to mitigate stormwater runoff. At the front lines of this effort stands Dean Hay, green infrastructure director for The Greening of Detroit, a non-profit agency that’s turning Cody Rouge into a test kitchen for various green infrastructure projects, including planting forests and urban prairies on city parks and vacant lots.

The Greening of Detroit planted 7,000 trees last year and, according to Hay, a mature tree can soak up 5,000 gallons of water per year. Such reforestation projects go a long way toward keeping Detroit’s basements dry. In addition to trees, Hay is also spreading the vacant lots of Cody Rouge with his own special cocktail of prairie seeds.

These urban prairies are designed for minimal maintenance, and only need mowing once a year. This is important in an area like Cody Rouge, which has lost 24 percent of its population in the last decade. Hay’s prairie mix is designed to fend off invasive species — those with such menacing names as chicory and globe thistle — that would otherwise need chemicals to remove.

The globe thistle may sound innocuous to laypeople, but it poses a serious threat to public safety. Why? It typically grows taller than four feet, creating security risks for residents. Kirk Mayes, executive director of the Brightmoor Alliance, pointed out that schoolchildren don’t feel safe when walking through areas where they can’t see over the top of the brush. Hay’s special prairie blend only grows as tall as 30 inches.

In areas like Brightmoor that feature small, cheaply built homes meant for early-20th-century autoworkers, houses will deteriorate quickly and soon need demolition. This will take on extra importance in 2014 as Detroit seeks to spend $52 million in federal “Hardest Hit” funds that will demolish thousands of properties in six target areas throughout the city.