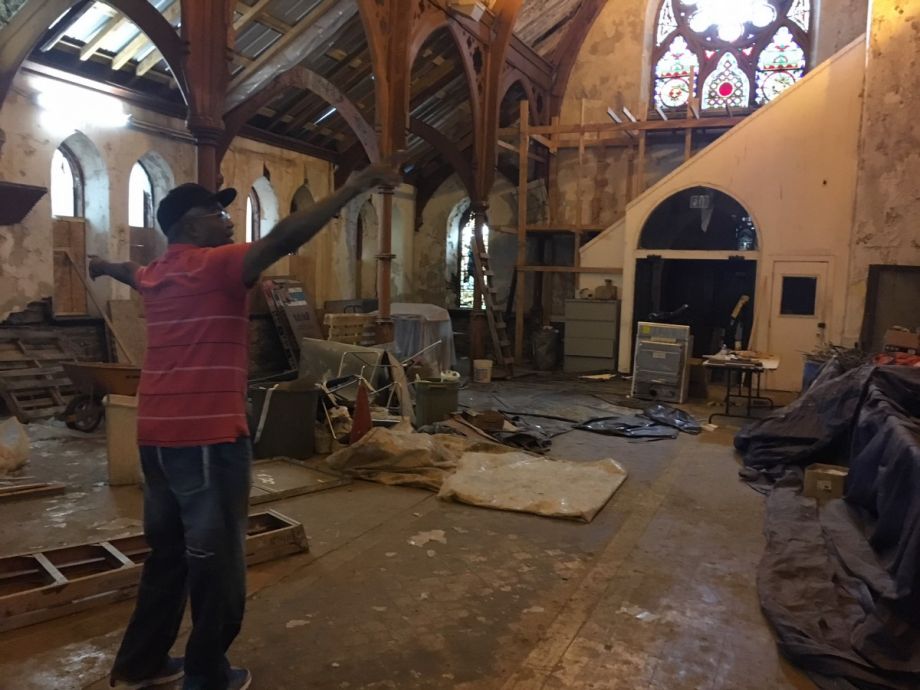 It would be simple enough for 19th Street Baptist Church to cut and run.

The congregation has spent the better part of the last decade in triage mode, barely maintaining its historic sanctuary building, which was designed by the architecture firm of Furness & Hewitt and built in the 1870s. Holes in the sanctuary roof were covered with corrugated sheet metal as part of an emergency maintenance intervention performed with preservationists from the University of Pennsylvania in 2012. The serpentine stone facade is crumbling, with the sidewalk in front of the church fenced off. The congregation has dealt with various leaks and termite damage. And occasional efforts to raise funds for a more comprehensive renovation have not gotten off the ground.

“We were trying to restore, but what happened was, we received two estimates to restore the walls, and they were close to $300,000, and that’s when reality set in,” says Reverend Wilbur Winborne, the church’s pastor.

Now the congregation, which took over the building in the 1940s and has shrunk by about two thirds from its peak of 300 members a few decades ago, is planning to find a new home by the beginning of next year. And while it would have no trouble selling the property in the gentrifying Point Breeze neighborhood it’s called home for the last seventy years, the church is hoping to find a particular type of buyer: One who won’t tear the building down. The church is working with the group Partners for Sacred Places to find a “preservation-minded buyer” in hopes of keeping the structure from falling to the wrecking ball, as more than two dozen historic churches have since 2011, according to research from the Pew Charitable Trusts and recent news reports.

When it comes to 19th Street Baptist, “you’ve got two legacies,” as Winborne says. There’s the building itself, which was listed on the city’s Register of Historic Places in 1984 for its unique architecture and association with the famed architect Frank Furness. And then there’s the legacy of the 19th Street Baptist ministry, which became a community institution. Its former pastor, Charles Walker, was a “phenomenal, godly communicator,” Winborne says, who was known throughout the neighborhood. For both of those legacies, the congregation hopes someone will take over and stabilize the building.

There’s no official estimate for how much it would cost to fully restore the building, or what kind of adaptive reuse might be best for the site, says Rachel Hildebrandt, senior program manager for Partners for Sacred Places.

“There have been different estimates completed at different times, but nothing is really up to date,” Hildebrandt says. “They’ve been handling issues as they’ve come up, but just looking at the building, you can tell that it needs something a little more comprehensive.”

The effort is unique, Hildebrandt says, because most transactions for out-of-shape church properties like 19th Street Baptist are underway before preservationists can get involved. Most recently, as Next City has covered, the Christian Street Baptist Church in South Philadelphia was demolished for townhomes despite last-minute efforts to have the building preserved.

“For the most part, what happens is, developers make offers directly to these congregations, and they change hands before a building ever goes on the market,” Hildebrandt says.

19th Street Baptist Church is already designated historic, meaning a developer would have to prove that a “hardship” would keep him or her from using the property as-is before demolishing it. The effort by the congregation to find a buyer who won’t try to go that route could be a test not only of whether this particular building has a future but the degree to which there is a market in Philadelphia for historic properties with maintenance issues. For the last year and a half, a mayoral task force has been at work on recommendations for updating the city’s preservation ordinance and other changes to the city’s approach to its historic assets. The task force has discussed the possibility of creating financial incentives for preservation, an idea which both preservationists and developers support, but it has not yet released its final recommendations.

On Tuesday, Lloyd Butler, a deacon for 19th Street Baptist Church, and Vincent Smith, an associate minister, showed a small gathering of reporters around the dilapidated sanctuary, which the congregation stopped using around 2008. The congregation now meets in a smaller room on the second floor of the building’s south side. Butler did much of the carpentry and woodwork for the emergency repairs and other maintenance over the last few years. The corrugated metal is still exposed in the old sanctuary, which is lined with stained glass. The congregation has been working with various preservation groups in recent years to raise money for more repairs, but so far the progress has been incremental.

The congregation has lately seen some modest growth, says Winborne, and it wants to move to a new location where it can expand its ministry. Winborne says he understands the building may be worth less with the church on it than it might be as raw land. He hopes a buyer will come along who can make a commitment to saving the building while offering a fair price to the congregation.

“It’s really a jewel of a church,” Winborne says.