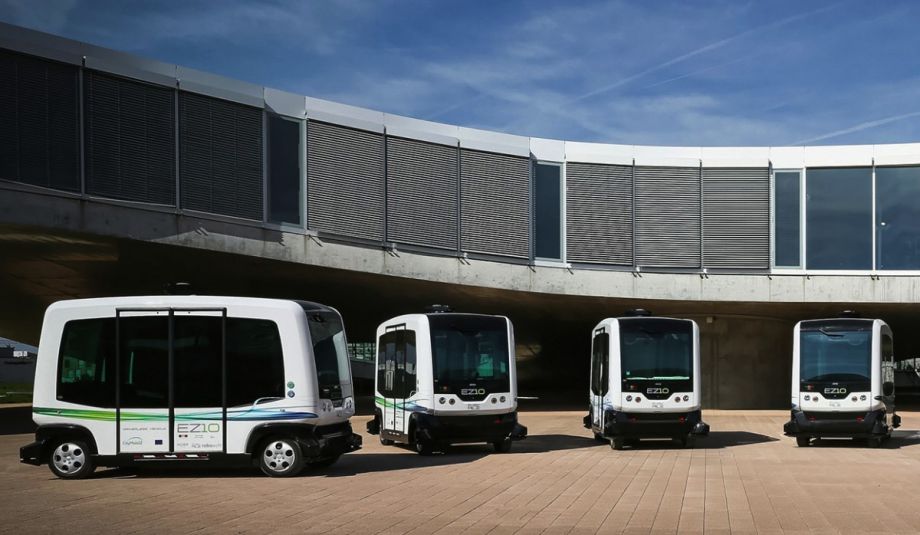 When the robot revolution comes and intelligent machines rule over humans, Contra Costa Transportation Authority (CCTA) may well share some of the blame. Covering a region just east of San Francisco, CCTA wants to help bring self-driving vehicles from concept to reality. In October 2014, the agency opened GoMentum Station at a former naval base in Concord, to serve as an autonomous vehicle testing ground and has since partnered with Honda and other companies experimenting with self-driving cars.

CCTA is partnering with EasyMile, a French driverless vehicle maker, to bring at least two of their EZ10 SDVs to an office park called Bishop Ranch in San Ramon (about a half-hour drive east of Oakland), after they’ve been tested at the GoMentum site. The boxy, electric EZ10s are 13 feet long, seat six with room for six more to stand, and have a top speed of 25 mph. The shuttles use internal mapping software to plot their routes and external sensors to help them not hit people and things.

This pilot project will be first to bring SDVs to the U.S., but EasyMile says it’s got EZ10s currently operating in France, Spain, Finland, Switzerland and the Netherlands.

“There are a lot of great technology concepts out there,” says CCTA Executive Director Randy Iwasaki. “If nobody tests them they will never go anywhere. We’re trying to break the mold and test them today.”

CCTA handles transit, pedestrian, bicycle and streets planning, and Iwasaki says SDVs could be another tool that might help replace solo driving.

“We’re not saying this will replace all vehicles. There’s still a need for a BART line or major bus rapid transit line. The hard part for a suburban transit line is how people get from their house to that bus or train station. If you drive your car, it just sits there all day taking up space,” he explains.

Step one is seeing how the SDVs do in the 585-acre Bishop Ranch office park. The office park owners see the autonomous shuttles as an ideal way to get people from building to building and from car to office. Iwasaki is excited about the opportunity to test in a real-world situation.

“The EZ10 application makes a lot of sense in tighter quarters. If you’re running around a business park or a city you don’t want a 40-foot bus maneuvering throughout,” he says. Enhancing their maneuverability: Either end of the EZ10 can be its front, meaning it can change directions in a small space without needing to turn around.

If the Bishop Ranch pilot goes well, Iwasaki thinks the SDVs could be a boon in retirement communities and other places where people with limited mobility need assistance to get around.

CCTA’s long-term goal is to develop a “smart city” in Contra Costa County where a subscription-based autonomous vehicle service will serve as the first mile/last mile connection for residents and people can just press a button to hail their ride.

“Things that used to be futuristic Buck Rogers stuff are becoming reality today and we’re really excited to be part of that,” says Iwasaki.

CCTA is setting its sights on short distance, intra-city transportation, but we may well see full-sized driverless buses in the near future as well. In August, Chinese company Yutong successfully sent a driverless city bus on a busy, 20-mile stretch of highway.