San Diego Is Ready to Go Big on Biking and Walking 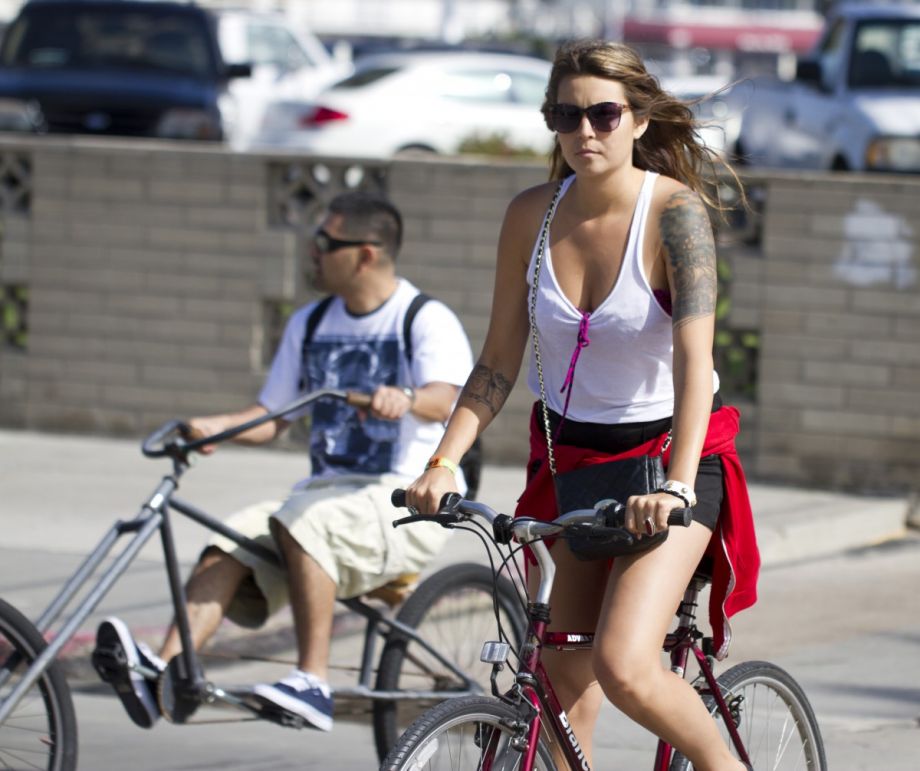 Bikers in San Diego (Photo by Nathan Ruper on flickr)

The city of San Diego has big ideas for downtown streets. Their draft Downtown Mobility Plan outlines a network laden with protected bike lanes, pedestrian greenways, curb bulb-outs, road diets and more. If the plan can make it from concept to construction, it will remake the city core for biking and walking.

“Just getting to this stage is transformative,” says Sam Ollinger, executive director of nonprofit advocacy group BikeSD. “If they implement the plan, it’ll absolutely be a game changer for San Diego.”

The mobility plan calls for 9.3 miles of protected bike lanes and 5.5 miles of pedestrian greenways in the roughly two-square-mile downtown core. The plan defines greenways as expanded sidewalks, “that can serve as linear parks” that include benches, tables, trees and other landscaping. Additionally, the city plans to install new wayfinding signage and curb bulb-outs to shorten street crossings. All told, the city estimates the plan will cost just under $64 million.

Perhaps a sign of how urban planning has evolved, the mobility plan specifically calls out the importance of creating a connected network: “Implementing the network as a whole, rather than individual segments, will improve the effectiveness of the cycleways and establish a well-connected grid of north south and east west protected bicycle facilities that can improve the safety and comfort for cyclists in Downtown.”

Because downtown streets are so wide, planners say they can accomplish their bike and pedestrian goals without losing much capacity. On some streets, plans call for reducing lane widths. On others there are plans for road diets that eliminate a car lane all together.

Ollinger says other than sharrows there is currently almost no bike infrastructure downtown.

“Downtown San Diego is a little unusual compared to the rest of the city in that it has almost a perfect urban grid,” she explains. “That grid gives you lots of choices of where to ride, but there’s not a lot of infrastructure.”

As is often the case on streets with no infrastructure, only those willing to brave it among cars end up riding. “You have to be comfortable riding in traffic … riders are almost exclusively male,” she says. (Drivers also tend to move faster on the very wide streets.)

Still, San Diego has a strong biking culture according to Ollinger.

“We actually have a pretty strong bike culture within the beach community. They wouldn’t identify as cyclists, it’s just how they get around. Downtown, there’s been an increase in ridership, anecdotally and in data counts from the city,” she says.

Mayor Kevin Faulconer is a cyclist, and the city council has mostly supported bike projects. Funding is rarely a problem either.

“We have funding because local sales tax pays for a lot of active transportation projects and our regional planning agency has set aside funding explicitly to be used to encourage biking and walking,” Ollinger explains.

And though she’s excited about what the plan will do for biking and walking, Ollinger thinks it could’ve gone a little further. San Diego’s two main commercial strips, Broadway and Market streets, aren’t getting any bike or pedestrian improvements despite a high rate of car and bike and car and pedestrian collisions.

Ollinger also wishes the plan did more to address parking minimums. “It’s the elephant in the room,” she says. “[The plan isn’t] fully addressing the cost of how much public space is devoted to parking private vehicles.”

Though there will be some loss of parking — 731 spots in total in the long term — much of it will be maintained by converting parallel parking into angled parking. Still, parking will surely be a major battle for implementation. Last year a bike project on a major east-west thoroughfare died after businesses came out strong against losing parking.

The public has until March 11 to weigh in on the project. City Council will vote on whether to adopt it in May.

If the plan gets implemented, Ollinger thinks San Diego could serve as a model for other semi-suburban, autocentric U.S. cities.

“It’s a major city, but our streets are so wide and the city isn’t very dense,” she says. “We can’t quite borrow from strategies from New York or San Francisco, but we can borrow lots of lessons from, and be an example for, smaller places like Kansas City, Oklahoma City.”