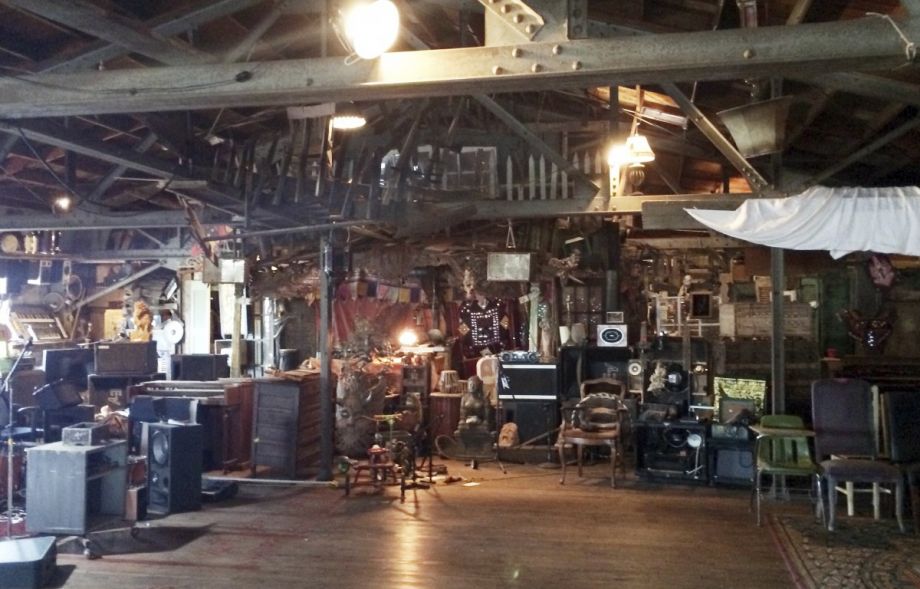 A 2014 photo provided by a potential tenant shows the interior of a portion of the “Ghost Ship” warehouse in Oakland before it was destroyed in a fire earlier this month, killing over 30 people. (Ajesh Shah via AP)

Before the Dec. 2 fire at an Oakland converted warehouse called the Ghost Ship, Melissa J. Frost had already been thinking about safety in DIY spaces. She’d bought a house in West Philadelphia at 17, living in and fixing it up communally, hosting shows in the basement. Now a professionally trained architectural designer, she’s been revisiting the wiring that she and friends installed together years ago. An electrician has found at least three places where it posed a risk she wasn’t aware of.

Now she and architectural designer S. Surface are working to provide DIY venues across country with the information and resources they need to make their spaces safer. Both have spent years living, dancing, organizing and creating in ad hoc spaces, and both lost friends in the Oakland fire, which killed over 30 people. Many were there for a concert, and were queer and trans, part of Oakland’s underground scene. One friend had played in the first show at Frost’s Philadelphia home.

So far, Surface and Frost have set up two interrelated resources: an online forum for people to offer or request architectural, legal and project services, and an ongoing list of steps DIY venues can take to reduce risk and the potential for harm. All of these resources, as well as updates about events on DIY venue safety, can be found at saferspac.es.

Calling attention to spaces that are physically unsafe and working to make them safer can not only reduce risk of injury or death, but also keep venue owners accountable and support disability justice, says Surface, who is also a curator and member of the Seattle Arts Commission. The same factors that make an ad hoc venue a fire hazard may also make it difficult to navigate for a person of size or with a mobility challenge. It’s one thing to carry a friend using a wheelchair up the stairs to a show, Surface notes, and another thing to ensure that person can get out in case of an emergency.

The document, “Harm Reduction for DIY Venues: Do it Yourself. Do it Now” starts with low-to-no-cost steps venue organizers can do themselves, immediately, like decluttering hallways and putting up exit signs. It then moves into steps that would cost more and likely require a design professional, like installing fire doors and replacing walls that don’t have proper insulation and sheetrock.

There are also suggestions for behavioral changes, like announcing where the exits and fire extinguishers are at the beginning of a show. Surface started the document after reporter Dave Segal requested tips for Seattle venues. Making that document editable by the public created an opening for corrections and additional information. “We’re contributors on equal level with everyone else who is contributing,” Surface says. Right now, the document is closed so it can be streamlined and reorganized.

Frost, who built the Safer Spaces website and has been connecting people in search of resources with people who want to help, says the response has been overwhelming. “A lot of people in these [DIY] communities are now architects and fire safety professionals and lawyers,” she says, many of whom share her situation. “I don’t still live in a warehouse that’s unsafe but because I have, I’m willing to help someone who is in that position.”

Both Frost and Surface are cautious about playing the role of intermediary, and are trying to create systems for people to connect directly to help each other. Events for DIY safety have already been organized in Oakland and Seattle, and a date will soon be announced for one at Vox Populi in Philadelphia.

“There were no groups that existed within the DIY movement prior to this that can channel that response,” says Frost, and she’s still figuring out how to direct people who want to contribute their time or expertise. Right now, people can add their names and contact information to documents volunteering their skills, or requesting help. But since many venues exist in a legal limbo, Frost is also looking for ways people can seek assistance or material resources anonymously. She’s also developing a zine that will share tips on DIY venue safety through narratives by and about venue organizers who have experienced emergencies or gone through the process to legalize spaces.

The two designers note that these resources can be relevant to any kind of ad hoc living situation, not just punk concert venues — from low-income and undocumented people living in unpermitted housing to storefront churches in need of low-cost fix-ups. Surface says the process has also been educational for professionals and city officials who might lack the cultural competence and vocabulary to speak to people living in these situations. Fixes that cost “only $1,000” for example, aren’t affordable for many.

“It’s not just educating DIY people about code, it’s considering both types of people — people living in these spaces and people who have professional experience in these fields — as having a certain type of expertise and getting them to talk to each other,” Surface says, adding that they’ve heard from several city officials who appreciate the resource and are evaluating the possibility of creating an interim designation for venues trying to get up to code.

For the most part, says Surface, the DIY proprietors they know are extremely responsible and knowledgeable, and they don’t want this one tragedy to cast all DIY spaces in a bad light. This isn’t a time to condemn or evict people from ad hoc spaces, they say — that’s another form of violence, and doesn’t address security in the long term. A lot of attention has been paid to how DIY spaces play into the affordability crisis in Oakland, but Frost says these spaces aren’t just about low-cost living, but about choosing to live and support each other in ways that may fall outside convention.

The resources on Safer Spaces take up that ethos. “It’s open to the community, it’s crowdsourced,” says Surface. “I just want the information to be in people’s hands.”