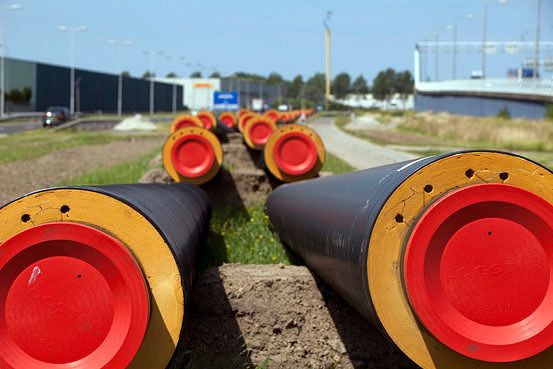 Pipes that will transport heat through the New Heatway.

Rotterdam is chilly. From November until about the end of April, the city’s average temperature hovers between 1°C and 5°C (34°F – 41°F). The problem for many, however, isn’t the cold so much as the darkness, the wetness and the wind. In fact, most guidebooks recommend that tourists skip the Netherlands completely until the sun returns in May.

Luckily, Rotterdam is very good at keeping its residents warm and dry. During World War II, civil servants at the Municipality of Rotterdam developed plans for a district heating system. The system, in which multiple buildings are heated from a central, remote source rather than their own in-house boilers, was to be implemented during reconstruction of the areas that had been destroyed during the bombardment. When the war ended in 1945, Johan Ringers, Minister of Public Works and Reconstruction, oversaw the rebuilding of the city and the simultaneous placement of a district heating pipeline. In 1949, Hotel Pax became the first building to be fully heated by the new system.

District heating is more energy efficient and produces lower carbon emissions than individual boilers. Systems vary from country to country, but most produce heat through cogeneration plants, geothermal heating or nuclear power. Manhattan, for instance, has a district heating system that’s been operated by Con Edison, the city’s utility company, since 1882. San Francisco, Denver and Seattle also use district heating systems, and Denmark and Germany are increasingly using solar-thermal panels to source their district heat. But Rotterdam is taking the method a step further.

With clouds blocking the sun through much of the winter, solar energy isn’t in abundance here. But water is, and the industrial activities that take place in the Port of Rotterdam produce an enormous amount of excess heat. Until 2012, that heat was simply released into the atmosphere or the Maas River. But today more than 50,000 Rotterdam households are heated by the port’s residual warmth, with plans to heat an additional 95,000 by the end of 2014.

The process begins at the AVR Waste-to-Energy plant in Rozenburg, a borough of Rotterdam about 20 kilometers west of the CBD on the southern bank of the Maas River. In addition to household, industrial and biomass waste, the plant has recently begun to process imported waste as well. That waste is converted into steam, heat and electricity through incineration. But it’s also the site of a groundbreaking project: there, in the biggest waste-slash-power plant in Europe, residual warmth from surrounding port industries is collected and diverted into the “New Heatway” (De Nieuwe Warmteweg), a 26-kilometer-long double pipeline running from Rozenburg to the Maasstad Hospital and back, redistributing the excess heat to homes and businesses along the way.

Initiated by Warmtebedrijf Rotterdam, a public-private initiative, the New Heatway’s initiators and shareholders include the Province of South Holland, the Municipality of Rotterdam, WoonBron housing corporation and E.On, the Netherlands’ largest energy provider. Visser & Smit Hanab | Drilling Technologies, a division of VolkerWessels, are responsible for the New Heatway’s design, construction and maintenance. Private energy companies then manage the distribution of the district heating to individual end users. In Rotterdam, Nuon and E.On are currently providing heat through this pioneering system.

Back in Rozenburg, water heated through industrial processes enters the system. At its source, the water is 120°C. Because of the piping system’s heavy insulation, the water only loses about 2°C by the time it arrives at the distribution centers in different neighborhoods. From there, the pipelines shrink dramatically, causing the water to cool much more quickly as it flows from the centers to individual houses, shops and office buildings, where it generally arrives at about 70°C. When the water returns to the network and eventually makes its way back to the AVR plant in the harbor, it can be anywhere between 70°C and 90°C, depending on the time of year.

In addition to the New Heatway, Eneco is planning to install another distribution pipeline running north under the Maas River and into Rotterdam through Vlaardingen and Schiedam. Headquartered in Rotterdam, Eneco Group is an energy company with about 7,000 employees and a mission to provide “sustainable energy for everyone.” Construction on the 16.8 kilometer “Northern Pipeline” (Leiding over Noord) has already begun – neither Vlaardingen nor Schiedam have local district heating networks, so it involves a significant amount of pipe-laying through existing neighborhoods. According to a statement from Eneco, they have contacted local stakeholders such as developers, housing corporations, health care facilities and homeowner associations to evaluate where the system can have the most impact. Eneco also organized a series of open information meetings to inform local residents and address public concerns about the project.

A map of the New Heatway.

Beginning in October 2014, Eneco will join the energy providers already buying residual heat from the AVR Energy-from-Waste plant in Rozenburg. “The Leiding over Noord project will realize environmental benefits for all people living and working in the Rotterdam area,” says Cor de Ruijter, a press officer for Eneco. “It will bring a reduction of CO2 emissions by using the heat from a remote waste-to-energy plant instead of using heat from a gas-fired power plant in the city. Financially, there will be no change for the heat consumers. This is an investment of tens of millions of euros that will give a certain financial return in the long term. But there will be environmental returns from the first moment heat will go through the pipe.”

Rotterdam has estimated that the New Heatway will prevent the release of 70 to 80 kilotons of CO2 annually — roughly the same emissions produced by 17,000 cars in a year. And Eneco estimates the reduction results from the Northern Line to be even higher, at 95 kilotons per year. Together, these two pipelines will have the net effect of reducing CO2 emissions by about 175 kilotons — more than some entire countries produce annually. Still, Rotterdam and its port are responsible for about 16 percent of the CO2 emissions produced in the Netherlands, so massive emissions reductions are urgently needed. To put this in perspective, in 2013, Rotterdam produced more CO2 emissions per capita (29.8 tons) than London (9.6) and Shanghai (11.7) combined. Moreover, the financial benefits for the end consumer are fairly negligible. Both district heating and natural gas delivered from a supplier will cost an average household about the same: 1,000 euros per year.

For Rotterdam, the incentives to reduce carbon emissions are fairly obvious. And luckily for its citizens, this city is willing to make big, bold investments to ensure those reductions continue. The genius of the plan is that, while drastically reducing emissions, it will keep us warm and dry – unless, of course, we happen to venture outside between November and April.